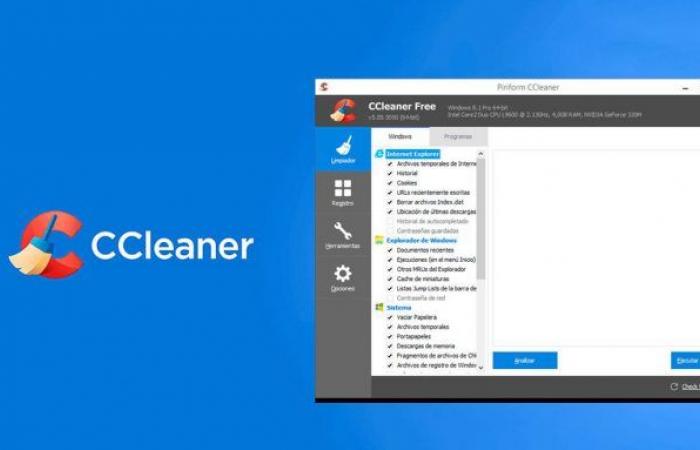 Many Windows 10 users have adopted CCleaner as one of the essential programs to keep the computer and the hard disk free of unwanted files. However, its latest version is generating suspicions due to the way it operates.

CCleaner is a famous Windows cleaner that includes options to remove various disposable files from the system, applications and a corrector of erroneous entries in the operating system registry.

Despite being a lightweight program, its latest version is being accused of being potentially harmful to the Privacy of the users. This stigma has persecuted him in recent years, for alleged practices of data collection that have had to be removed with patches.

Now, the controversy surrounds the process that the program does in Windows 10 and previous systems, precisely the one called CCleaner64.exe, which runs permanently in the background and was not included before.

Also, some users point out that updating to the version 5.74 it has been forced and no longer like in other occasions in which a box appeared recommending to install the latest edition each time the program was started.

The community is very attentive to what this new CCleaner64.exe process does and in case it involves any kind of monitoring on their computers. Suspicions have even come to call it as spyware, as it does not disappear even when closing the notification icon of CCleaner in Windows 10 (those next to the clock on the taskbar).

Of course, closing the process is possible through the Task Manager. If you find it, just right-click on it and select End Task, an action that many netizens have reported having performed successfully.

The company behind CCleaner, Piriform, has been consulted in the support forums about the new process. The company’s response has been: “We are not as interested in you as you might think.”

*The article has been translated based on the content of Source link by https://larepublica.pe/tecnologia/2020/11/11/ccleaner-la-ultima-version-del-programa-levanta-sospechas-en-sus-usuarios/
. If there is any problem regarding the content, copyright, please leave a report below the article. We will try to process as quickly as possible to protect the rights of the author. Thank you very much!

These were the details of the news CCleaner: the latest version of the program raises suspicions in its... for this day. We hope that we have succeeded by giving you the full details and information. To follow all our news, you can subscribe to the alerts system or to one of our different systems to provide you with all that is new.