Why the presidents of the region have not greeted Manuel Merino... 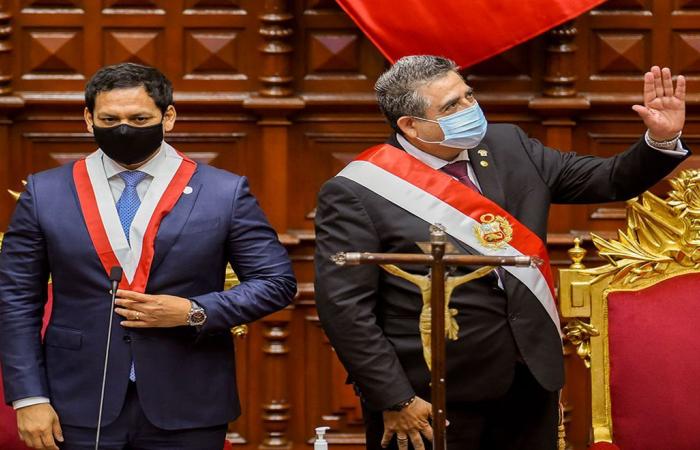 Manuel Merino is already the new president of the Peru, in the midst of protests and denunciations of a coup, after taking office this Tuesday, November 10, in a session of Congress in which there were no diplomatic representatives, as is often the case in investiture of this nature.

Until the afternoon of this chaotic day in Peru, no president of the region or any government has spoken to congratulate Merino after a controversial constitutional process that led to the dismissal of Martín Vizcarra.

For the political analyst Alonso Cárdenas, it is “extremely striking” that no head of state has greeted Merino and that there was no presence of any ambassador at the inauguration held in the morning in Congress.

“The new Government of Mr. Merino it needs the recognition of the Organization of American States (OAS), the Latin American countries, the European Union, the United States, Canada, in short, the international community, ”he told this newspaper.

However, neither the OAS nor its Secretary General (Luis Almagro) have expressed themselves so far. “The different leaders are talking with their embassies or with international organizations to see how to proceed.”

The swearing in of Merino, an opposition congressman who won his seat with some 5,000 votes, “for now has no air of legitimacy” having been momentarily ignored by his neighbors.

The importance for Peru

Peru was one of the countries with the best economic growth rates in the region before the pandemic. Now who has the second death rate from COVID-19 in the world, surpassed only by Belgium, the crisis in the matter soared.

For Vizcarra His main task was, apart from the coronavirus and the confrontations with Congress, the reactivation of the productive apparatus after maintaining one of the longest confinements on the planet. A task that is transferred to the hands of Merino.

In his short speech after being sworn in, the acciopopulista assured that during his tenure he will seek to strengthen large and small companies with the creation of lost jobs, although he did not specify how he will do it.

“A government that is not recognized internationally has its doors closed to the World Bank, the Inter-American Development Bank, the International Monetary Fund, and credit institutions,” Cárdenas warned. “The institutional situation in our country is extremely serious.”

So far only Argentine Foreign Minister Felipe Solá has expressed himself in this regard in statements to local radio Metro. “There is an issue linked to the Peruvian Constitution, for which Parliament has a very great veto power, and at the same time, the president can dissolve Parliament. All that is kind of weird “, he opined.

Solá lamented the “instability in the upper layer, nothing less than the Presidency and Parliament” of the Peru, “A brother country”.

These were the details of the news Why the presidents of the region have not greeted Manuel Merino... for this day. We hope that we have succeeded by giving you the full details and information. To follow all our news, you can subscribe to the alerts system or to one of our different systems to provide you with all that is new.