Dadic and Thiem are Austria’s “Sportsman of the Year” 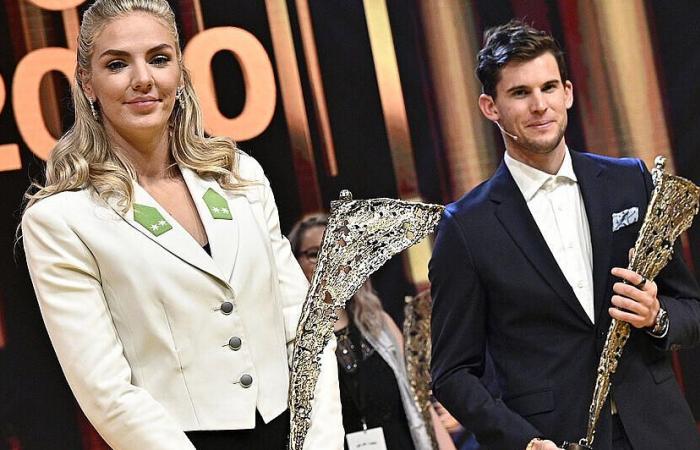 Dominic Thiem has (finally) made it. The tennis star from Lichtenwrth is deservedly Austria’s athlete of the year for the first time. In the secret vote among the members of the sports journalists’ association Sports Media Austria, the 2020 US Open Champion and third in the world rankings prevailed in a sovereign manner. “This is an award that fills me with pride,” said Thiem, who is following in the footsteps of ski ace Marcel Hirscher. The World Cup series winner had triumphed five times in a row and a total of six times by the time he retired.

The women’s athlete Ivona Dadic won the race – incidentally, the first Upper Austrian woman since 1996. It was the year in which the middle-distance runner Theresia Kiesl (at that time Olympic third in Atlanta over 1500 meters) and “super eagle” Andreas Goldberger (ski flying world champion on the Kulm ) were at the top of the podium.

Video: Interview with the winners

This video is disabled

The outstanding performance of Dadic this year was the state championship in the heptathlon in Gtzis, where the 26-year-old shone with the annual world record of 6,419 points. “That was definitely my best heptathlon – under extreme conditions. I was really cold back then, but it was worth it. I put in a top performance,” remembers Dadic of August.

In the “Team of the Year” category, football set the tone. Austria’s double winner and Champions League participant Red Bull Salzburg retained the upper hand en suite for the third time. LASK, which advanced to the second round of the Europa League and was at the top of the Bundesliga before the corona pandemic, came in second. Third place went to KTM, the motorcycle manufacturer from Munderfing, which this year launched a “winning bike” in the MotoGP royal class. On August 9, the South African Brad Binder was the first to reap the fruits of the impressive development work of the Upper Austrians with his success in the Czech Grand Prix.

Thiem has also made a giant leap in his career. After recovering from a foot injury, he is flying to London today, where he will compete in the ATP Finals of the eight best players of the year for the fifth time in a row on Sunday. “The memories of 2019 are good, I beat Federer and Djokovic”, Thiem looks back, who only failed in the final against Stefanos Tsi-tsipas (Gre).

On Tuesday he not only appeared at the Lotteries Sporthilfe gala to receive the “Niki” trophy named after the late Formula 1 legend Niki Lauda. Thiem had already been to downtown Vienna, where he left hand and footprints on the winner’s street. With “a thousand thoughts” that differ from tennis. “The terrible terror attack in Vienna shocked the whole world. Suddenly life in Austria came to a standstill. Very, very sad.”

Incidentally, Thiem is the third tennis player to be named national athlete of the year. Previously, this honor was given to French Open winner Thomas Muster (1990, 1995) and the former world number eight Jrgen Melzer (2010). (Alex)

The ON election for Upper Austria’s athlete of the year is also entering its hot phase. You can also vote online at nachrichten.at/sportlerwahl

info With a click on the icon you add the keyword to your topics.

info
With a click on the icon you open your “my topics” page. They have of 15 keywords saved and would have to remove keywords.

Add the topic to your topics.

These were the details of the news Dadic and Thiem are Austria’s “Sportsman of the Year” for this day. We hope that we have succeeded by giving you the full details and information. To follow all our news, you can subscribe to the alerts system or to one of our different systems to provide you with all that is new.