Emily Murphy, the woman who refuses to let go of the... 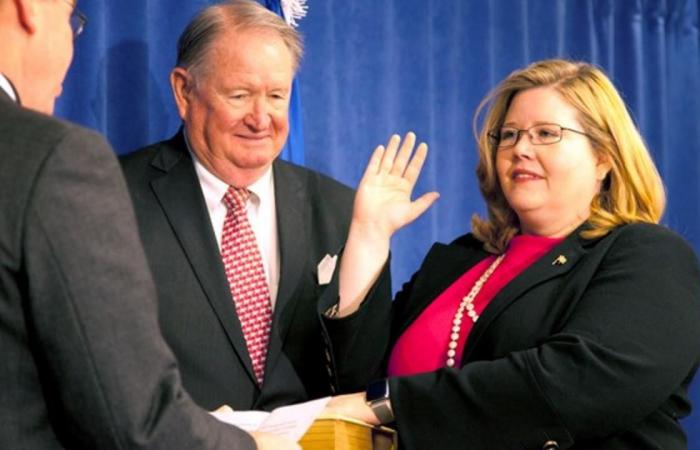 AT THE PALAIS MARKETS – The keys to the White House are held by Emily Murphy. And for now she does not want to pass them on. The director of “General Service Administration” refuses to sign a letter that would recognize Joe Biden’s victory and trigger the transfer of powers process.

Unknown to the general public a few days ago, it is now presented as “the most powerful woman in Washington – temporarily” by the Politico website. Being the director of the austere “General Service Administration” (GSA), is not predestined to be in the limelight. Yet it is a crucial position for the transition between two administrations … and it is precisely Donald Trump who appointed her to this post in 2017.

In fact, the GSA manages all of the federal real estate stock, as well as the supplies and logistics necessary for the operation of the American administration. It is therefore within its prerogatives to ensure the concrete transition between leavers and entrants. It is a long-term mission, on which a dedicated general services team has been working for more than two years, well upstream of the electoral process itself.

The transition, on which Joe Biden’s teams are eager to work, assumes access to all levels of administration, ministries, pharmacies, regardless of the level of confidentiality required. It also assumes the establishment of a phantom organization chart for incoming teams, with the creation of official email lines and addresses. Finally, this process is funded by the GSA to the tune of $ 6 million, a sum also blocked by the refusal of its director.

The GSA does not choose the winner of the presidential election– Pamela Pennington, General Service Administration spokesperson

But Emily Murphy believes that she cannot sign the letter of “ascertainment“, that is to say the certification of the victory of Joe Biden, which would trigger the transition. Pamela Pennington, the spokesperson for the GSA thus declared that”GSA administrator does not choose the winner of the presidential election“.

The precedents were almost all settled quickly by the appeal of the loser to the winner, which was de facto recognition of the result. However, this is precisely what Donald Trump refuses to do, as we will have understood: recognize his defeat.

Emily Murphy therefore had the choice of relying on the election results, like almost all of the American media, to proclaim Joe Biden the winner when Pennsylvania was out of the reach of Donald Trump. Or to side with the tenant of the White House who questions the validity of the ballot.

And she does nothing else, when she invokes the ballot between George W. Bush and Al Gore, the only precedent where the transition was postponed. Its spokesperson insists: “The GSA and its administrator will continue to submit to whatever the law requires, given the precedent set by the Clinton administration in 2000”.

At the time, Al Gore had indeed called George W. Bush to admit his defeat… before retracting, when it appeared that there was less than 500 votes of difference in the decisive state of Florida. This year, the gaps are in the tens of thousands of votes in key states, and the Republican team has still not produced evidence characterizing massive and / or organized fraud.

In 2000, a certain tension had remained palpable during the transfer of powers, as the victory of George W. Bush was perceived as usurped. Last symbolic scratch of the Clinton teams on the departure, the letter “W” – emblematic of the new president – had been removed from a number of computer keyboards. Which seems good schoolboy in view of the present situation.

For scholars of the American political microcosm, Emily Murphy is not, however, completely unknown. She had already had the opportunity to show her loyalty to Donald Trump, who appointed her to his post, during a parliamentary inquiry into the relocation of the FBI premises.

In 2018, the Democratic camp was intrigued by President Trump’s abandonment of this project, when it had been in preparation for a decade. Indeed, the large complex of buildings, in the heart of Washington, could have been transformed into a hotel, and thus create a direct competitor to that, very close, of a certain… Donald Trump, magnate of real estate.

Emily Murphy, who manages the building stock to which the FBI headquarters in Washington falls, had been heard by a parliamentary committee, and had ensured the independence of its decision. The possible conflict of interest has therefore never been proven. On the other hand, a subsequent investigation has amply demonstrated that the lady had lied: repeated contacts did take place with the White House, where a meeting even decided to abandon the move.

If Emily Murphy now reaches her quarter of an hour of (world) celebrity, it is not however the “letter of certification”, which she refuses to write, which establishes who is the next President of the States- United. In the last resort, the vote of the Grand electors, on December 14, will decide it definitively.

On the other hand, his inaction deprives Biden’s teams of precious access, which will be so much time wasted during the effective access to power. The implementation of a strategy, for example against the coronavirus epidemic, is therefore currently being done blindly. According to some sources, Donald Trump would however have authorized certain meetings between the teams, as long as they remain secret.

Ms Murphy’s position seems to illustrate the stranglehold that the president – who is therefore hesitant to call “outgoing” – retains over his administration. If the barons of the Republican Party have followed suit by not recognizing the victory of Joe Biden, we can observe that the wait-and-see attitude prevails for less exposed but more fragile positions. For example, the HRD of the White House would have threatened with dismissal all those who would be caught looking for a new employer …

As a former Hillary Clinton aide, Leslie Dach, notes: “I believe the message Trump is sending to everyone in the administration very clear is that they must continue to make his wishes come true.”.

The fear that is currently ringing in Washington is that Donald Trump will fully use the two months remaining to him to impose radical decisions. This period when the outgoing person still has all the powers, without being a candidate for anything, has sometimes made it possible to take unpopular or risky decisions. But in the case of Donald Trump, the range of possibilities is as always difficult to imagine.

These were the details of the news Emily Murphy, the woman who refuses to let go of the... for this day. We hope that we have succeeded by giving you the full details and information. To follow all our news, you can subscribe to the alerts system or to one of our different systems to provide you with all that is new.

PREV Al Jazeera says will not be silenced, after Gaza office destroyed
NEXT India's lauds Gulf assistance in fighting COVID-19