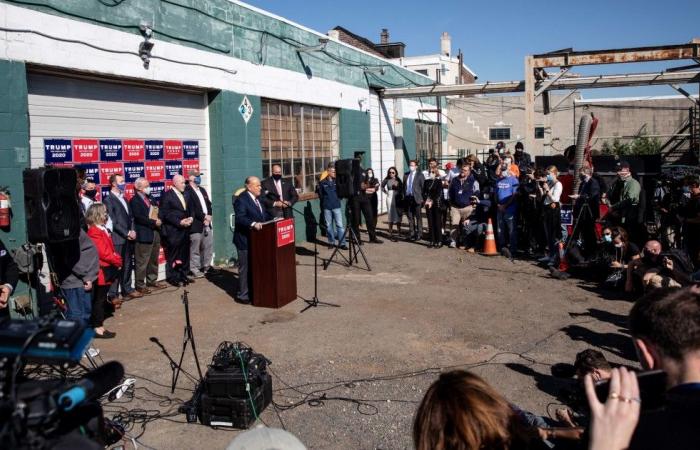 It was a scene which could have been cut out of a political situation comedy. On Saturday, President Donald Trump tweeted that his lawyers would hold a press conference at the Four Seasons in Philadelphia. Journalists from around the world had already begun to set course for the luxury hotel Four Seasons, when the correction came, both from the Trump camp and the hotel itself: The press conference would not be at the hotel, but at Four Seasons Total Landscaping, a garden center in northeast Philadelphia. sex shop and a crematorium as nearest neighbors.

It was in the parking lot of the garden center Trump’s lawyer Rudy Giuliani gave his last, fiery speech against the election fraud he meant to see everywhere, while it ticked on the journalists’ mobile phones that CNN had declared that Joe Biden had won the presidential election. One by one, they left the parking lot.

The session on Four Seasons Total Landscaping became the spark that ignited a thousand memes and Twitter jokes. The Trump camp explained that it was actually the plan to hold the press conference in a place that was both by the highway, secured, and far away from demonstrating Biden supporters. But it just seemed a little too perfect that the place they ended up at, happened to have the same name as the hotel where events like press conferences regularly take place.

The garden center itself has now started selling merch. Those interested can now buy hoodies and stickers with the inscriptions “Make America Rake Again” and “Lawn and Order”. But they have also issued a slightly hurt message in which they declare that they were honored to visit the press conference, and that they would like to be the harsh descriptions besides.

That’s how it came about the story of Four Seasons Total Landscaping to deal with the great American split. For even among the laughter balls on Twitter, there were a few voices who remarked that they thought the fun at the expense of the garden center and their neighbors was snobby. I would say this is a misunderstanding. It was not the garden center Twitter laughed at, it was the fact that there had been an obvious blunder that none of the Trump people dared to admit, and which therefore made them have to carry out the embarrassing incident in the parking lot. As one viewer remarked: It was as if they were invited to a press conference at The Ritz, and then clarified that they naturally meant the parking lot outside the factory that makes Ritz biscuits. For security reasons, of course.

But it was interesting how many of those who rejoiced over the story on Twitter, imagined that the employees at the garden center had been part of the fun, that they had deliberately not cleared up the misunderstanding when Giuliani’s people called. They took it for granted that Four Seasons Total Landscaping, like themselves, would immediately understand that the situation was ridiculous, because such things do not happen in such places. But the owners, who according to their social media profiles were Trump voters, saw perhaps only an opportunity to mean something to the US presidential election campaign.

Otherwise it was perhaps the newly elected president who had the last word, here too. In his first speech after the election result became clear, he said: “The Bible tells us that to everything there is a season – a time to build, a time to reap, a time to sow. And a time to heal. » There are, precisely, four.

These were the details of the news Four Seasons Total Landscaping: – Everyone laughs at Trump’s garden center.... for this day. We hope that we have succeeded by giving you the full details and information. To follow all our news, you can subscribe to the alerts system or to one of our different systems to provide you with all that is new.