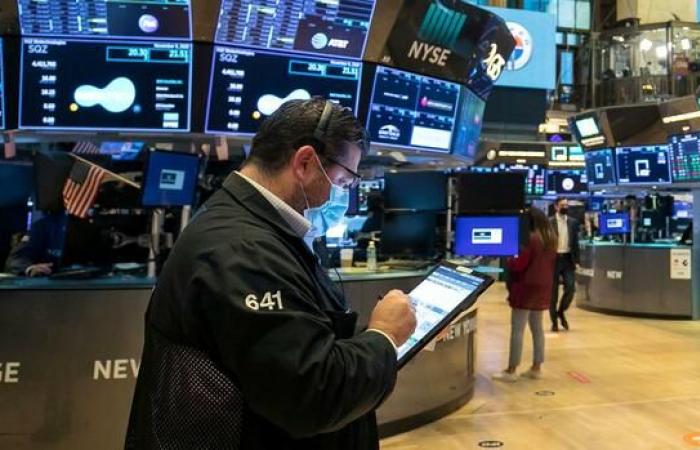 Düsseldorf You really rarely see such a price development when you look at the stock market board. In the German leading index Dax it rose almost vertically for a short time on Monday afternoon from 12:45 p.m. The reason was the announcement by the companies Biontech and Pfizer that they would apply for approval for their corona vaccine in the USA in November. In the end, the Dax closed almost five percent up.

On Wall Street, too, the indices rose significantly in the first hours of trading. However, there were also opposing movements in the market. An overview of winners and losers.

The latest developments inevitably focus on the pharmaceutical and health industries. Cyclical values ​​are also very popular with investors.

Biontech and Pfizer are the first companies in the world to have successfully submitted data from the study with a corona vaccine, which is crucial for approval. It goes without saying that investors take advantage of the already popular pharmaceutical stocks.

Pfizer stock was trading nearly 10 percent higher at $ 40 on Wall Street. That looks a lot like the biggest daily profit in the company’s history. A similar development can be observed in the US-listed stocks of the German development partner Biontech, which increased by 15 percent. In Frankfurt, the plus is now at a similar level.

Investors also took hold of chemical stocks. Bayer shares, which had come under strong pressure in the past few weeks, gained almost ten percent. On Monday it was also announced that the Leverkusen-based company had applied for approval of the new kidney drug Finerenone in the USA and the European Union.

The travel industry has been one of the hardest hit areas since the outbreak of the pandemic. Tour operators are now very popular with shareholders. Tui shares rose by almost a quarter to EUR 4.50, as did shares in Norwegian Cruise Line. The papers of Aida mother Carnival even gained 37 percent in London and are heading for the largest daily profit in the company’s history. For comparison: the stock exchange price has lost three quarters since the beginning of the year.

For the booking platform Booking Holdings it went up by 17 percent. In the United States, shares in cruise operator Royal Caribbean rose 30 percent to $ 77.

The global restrictions have hit airlines just as hard. Lufthansa shareholders can therefore take a deep breath. The share gained a fifth in value and has the ten euro mark back in view. Ryanair rose 14 percent in London, Easyjet even by a third.

Suppliers and service providers also benefit. In the Dax, the engine manufacturer MTU took the lead with a price increase of 16 percent to 191 euros. In the MDax, the airport operator Fraport stood out with an increase of 30 percent. Papers from the aircraft manufacturer Airbus in the MDax (20 percent) and Boeing in the USA (13 percent) performed analogously.

In general, cyclical stocks benefit from the greatly improved prospects for the global economy to recover as quickly as possible. German car manufacturers and suppliers are posting significant profits. The European total index is seven percent higher.

This development can be observed even better in financial stocks. The European banking index recorded the largest price jump in ten years. Most recently it was almost 13 percent higher. The shares of German problem children rose accordingly. Deutsche Bank gained five percent to just under nine euros. Commerzbank shares rose 13 percent to EUR 4.50. On Wall Street, Bank of America was up 11 percent and JP Morgan was up 10 percent.

The German Bankers Association had only confirmed on Monday how risky the corona crisis was with regard to the bank balance sheets. Hans-Walter Peters, President of the Association of German Banks (BdB), had therefore spoken out in favor of further concessions.

If the global economy recovers noticeably, the demand for crude oil should also increase. As a result, there was also a lot of upward movement in the oil market on Monday. The price of a barrel (159 liters) of the North Sea variety Brent, traded in Europe, rose by nine percent, as did the price of a barrel of the US variety WTI.

Those who have profited from curfews, contact restrictions and home office have experienced very high price jumps in the past few months. The prospect of successful vaccine development now weighs heavily on these companies.

In the Dax, the shares in the food delivery service Delivery Hero are down six percent. One share costs 106 euros. Over the year, the price increase is a respectable 60 percent.

The papers of the mail order pharmacy shop pharmacy lose 19 percent of their value in the MDax to just under 133 euros. For comparison: in mid-March, a share cost 40 euros. The cooking box supplier Hellofresh lost 15 percent to 42 euros. The value of a share has more than doubled since mid-March.

A similar picture is revealed at the mail order company Zalando, whose shares were quoted eight percent lower at 80 euros. Amazon only posted moderate losses of 1.5 percent.

Technology stocks are benefiting above all from the change of office in the USA. However, selected stocks shone in the corona crisis – the advancing vaccine development is therefore weighing on their prospects. The Nasdaq selection exchange is up, but its performance is weaker than that of the other indices. The TecDax even lost more than one percent.

In the case of individual stocks, the losses on Wall Street are limited. Before the trading day, the companies were deeper in the red. The streaming service Netflix listed on Wall Street five percent lower at $ 490. The game company Electronic Arts lost 1.5 percent.

The discounts in the shares of the video conferencing provider Teamviewer, which lost nine percent to 36 euros in the MDax, were clearer. This confirms the rather weak trend in the past three months. Zoom papers even fell 16 percent to $ 417. The price increase since the beginning of the year has been a considerable 630 percent. The messaging service Slack, which had a successful stock market debut in the summer of 2019, fell 1.5 percent.

The price for a troy ounce (31.1 grams) immediately lost value, most recently by five percent to $ 1,850. In the case of silver, the price decline was even more pronounced at six percent.

Investors immediately reacted more willing to take risks, which puts a heavy burden on comparatively safe investments like gold. The gold price had just moved back towards the $ 2,000 mark. At lunchtime, an ounce was $ 100 more. Gold had benefited from the weakness of the US dollar, as the precious metal becomes cheaper outside the currency area when the dollar exchange rate falls. That stimulates the demand worldwide.

More: Many investors have missed entry into the rally.

These were the details of the news Winners & losers of the corona vaccine turnaround for this day. We hope that we have succeeded by giving you the full details and information. To follow all our news, you can subscribe to the alerts system or to one of our different systems to provide you with all that is new.