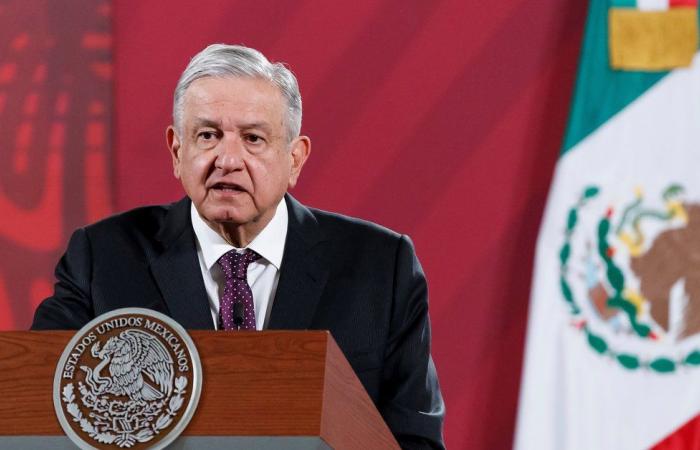 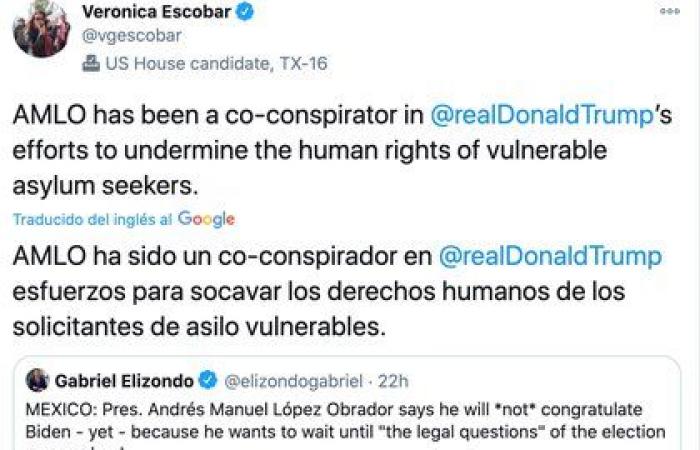 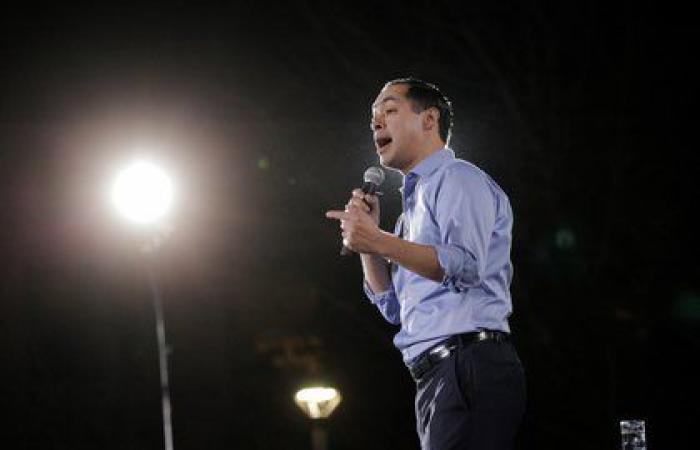 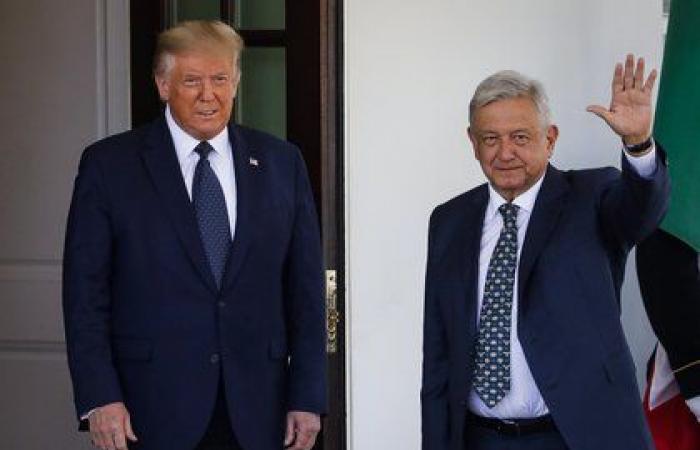 AMLO has received strong criticism both in Mexico and in the US for not congratulating Joe Biden as the winner of the elections in that country (Photo: José Méndez / EFE)

The president of Mexico, Andrés Manuel López Obrador, keep receiving strong criticism due to his refusal to acknowledge and congratulate Joe Biden for his victory in the elections in the United States, as predicted by all projections this Saturday.

With this decision, The Mexican president joined a short list of leaders around the world who have not congratulated the former US vice president and the questioning of his decision has been fierce both in Mexico and in the neighboring country to the north.

One of the harshest signals from across the border came from Veronica Escobar, a Democratic congresswoman. who obtained his re-election last week to continue representing the 16th District of Texas, on the outskirts of the city of El Paso, a few minutes from Mexican lands. 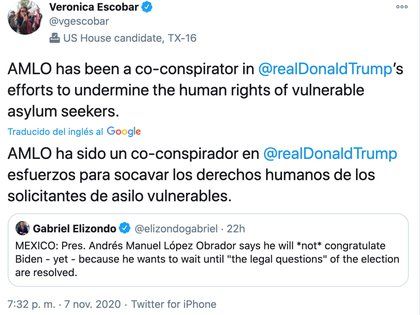 The harsh message against AMLO from the Texas congresswoman (Photo: Twitter @vgescobar)

“AMLO has been a co-conspirator in Trump’s efforts to undermine the human rights of asylum seekers vulnerable, ”the member of the House of Representatives assured in her social networks, citing a message that made it known that López Obrador would not congratulate Biden yet.

This Saturday, the Mexican president, whom Trump has said several times that he is his “friend”, said that would wait “for all legal matters to end” in the US elections to congratulate Biden. “We don’t want to be reckless, we cannot act, we want to be respectful of the self-determination of the peoples and the rights of others, “he said.

This situation generated immediate reactions among US congressmen. The influential representative of the 20th District of Texas, Julian Castro, was launched against López Obrador for his response. “This represents a true diplomatic failure of the president from Mexico, ”he said.

This, he added, at a time when the incoming Biden administration seeks to usher in a new era of friendship and cooperation with Mexico. 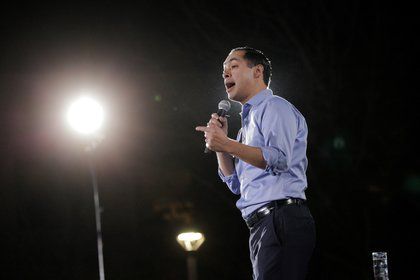 Escobar, for his part, directly accused López Obrador of collaborating with Trump on his immigration policy, one of the most prominent in the United States government in the last four years, which has even received the qualification of xenophobic.

Mexico became in recent years the de facto country to which the United States has sent all migrants who arrive in that country to wait for their asylum applications, and managed, through threats in the increase in tariffs, that the López Obrador administration dramatically slowed the entry through the country of Central American migrants.

Further, Trump and López Obrador have had a good relationship, crowned last July when the latter visited Washington DC to hold a summit with the former for the entry into force of the T-MEC, the new free trade agreement between both nations and Canada.

At that time, López Obrador He was also criticized for making the trip when Canadian Prime Minister Justin Trudeau decided not to participate. The most severe assured that the Mexican president had collaborated with Trump’s re-election campaign.

The situation was accentuated when AMLO refused to meet with Biden, citing concerns about possible electoral interference, when in 2012, with the Mexican as a candidate, the then vice president of Barack Obama did agree to meet in the run-up to the Mexican elections.

MORE ON THIS TOPIC

“We don’t want to be reckless”: López Obrador avoids commenting on Joe Biden’s virtual victory in the United States

These were the details of the news “Co-conspirator of Donald Trump”: the harsh accusation against AMLO of a... for this day. We hope that we have succeeded by giving you the full details and information. To follow all our news, you can subscribe to the alerts system or to one of our different systems to provide you with all that is new.