The Sheikh of Al-Azhar sends fiery messages to France during his... 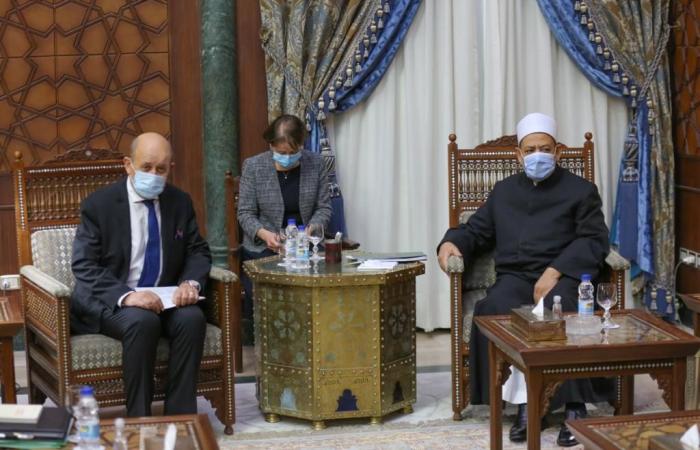 The sheikh of Al-Azhar, Ahmed Al-Tayeb, said on Sunday that those who insult the Prophet Muhammad will be prosecuted in international courts, refusing to consider the insulting cartoons of the Messenger of Islam as freedom of expression.

Al-Tayyib addressed the French Foreign Minister, Jean-Yves Le Drian, who is currently visiting Egypt, saying: “If you consider that insulting our Prophet Muhammad is a freedom of expression, we reject it in form and content.”

He added: Offending our Prophet Muhammad is completely unacceptable, and we will follow those who insult our noble Prophet in international courts, even if we spend our whole life doing that only.

Al-Tayyib added: We refuse to describe terrorism as Islamic. Everyone should stop this term immediately, because it hurts the feelings of Muslims in the world, and it is a term that contradicts the truth that everyone knows.

Al-Tayyib added, “We wanted the officials in Europe to be aware that what is happening does not represent Islam and Muslims, especially since those who pay the price of this terrorism are Muslims more than others.”

He continued, “I am the first to protest against freedom of expression if this freedom offends any of the religions, not just Islam. And he added: Is it wise to risk the feelings of millions of people for the sake of an offensive paper .. I cannot understand which freedom is this?”

The Sheikh of Al-Azhar said in a speech at the end of last October that “insulting religions and undermining their sacred symbols under the banner of freedom of expression is an ideological duplication and an explicit call for hatred.”

During his visit to the Egyptian capital Cairo, French Foreign Minister Jean-Yves Le Drian sought to calm the crisis of the cartoons offensive to the Prophet Muhammad, by affirming “deep respect for Islam.”

The French Foreign Ministry said in a statement before Le Drian’s arrival in Cairo that the foreign minister “will continue the process of explanation and de-escalation initiated by the President of the Republic.”

Le Drian discussed with Egyptian President Abdel Fattah El-Sisi ways to strengthen efforts to counter the escalation of extremism and hatred in light of the recent tension between the Islamic world and Europe, according to a statement by the Egyptian presidency.

After the meeting, the French Foreign Minister affirmed in a press conference with his Egyptian counterpart Sameh Shoukry that Paris respects the Islamic religion and Muslims are part of France.

Le Drian revealed that his country has strengthened the security of French embassies abroad, noting that there is a conversation carrying messages of hatred and hatred against France through the means of communication, according to local media.

Le Drian confirmed his country’s condemnation of the boycott campaign of France, in reference to Arab and Islamic popular movement in response to the offensive cartoons of the Prophet Muhammad, which was launched in France recently.

The French minister said during a press conference with his Egyptian counterpart, “I referred to the deep respect for Islam. What we are fighting is terrorism, it is the hijacking of religion, it is extremism.”

Le Drian assured that he came “to explain, if necessary, this battle and at the same time the struggle for the respect of freedom of belief.”

Macron had said in statements that France would not give up the “cartoons” (offensive to Islam and the Prophet Muhammad), which sparked a wave of anger throughout the Islamic world.

Islamic countries witnessed angry demonstrations against the French president, whose pictures and models of him were burned during the protests.

He refused to announce the abuse

The French President, Emmanuel Macron, had expressed his “understanding” of the Muslims’ feelings about the cartoons offensive to the Prophet Muhammad, may God bless him and grant him peace, without explicitly declaring his refusal to offend.

Macron said, in an interview with Al-Jazeera, last month, that “the cartoons are not a government project, but rather they stem from free and independent newspapers that are not affiliated with the government.” He added, “I understand the feelings of Muslims about the cartoons offensive to the Prophet.”

Macron continued: “I think that the reactions (to the French insult to Islam) were due to lies and distortions of my words, and because people understood that I supported the cartoons (insulting to the Prophet of Islam, Muhammad, may God bless him and grant him peace).”

The French President did not explicitly announce his rejection of these cartoons, days after announcing his adherence to the offensive cartoons.

During last October, France witnessed the publication of insulting pictures and drawings of the Prophet Muhammad, peace be upon him, on the facades of some buildings.

In addition to the offensive cartoons, France has recently witnessed a controversy over the statements of a large section of politicians targeting Islam and Muslims, following the killing of a history teacher on October 16, by a French citizen of Chechen origin, angered by the latter’s display of cartoons. His students “insulted” the Prophet Muhammad, on the pretext of freedom of expression.

Many Islamic organizations condemned the killing of the teacher, but stressed that this cannot be separated from the condemnation of his behavior related to displaying “offensive” cartoons of the Prophet.

These were the details of the news The Sheikh of Al-Azhar sends fiery messages to France during his... for this day. We hope that we have succeeded by giving you the full details and information. To follow all our news, you can subscribe to the alerts system or to one of our different systems to provide you with all that is new.