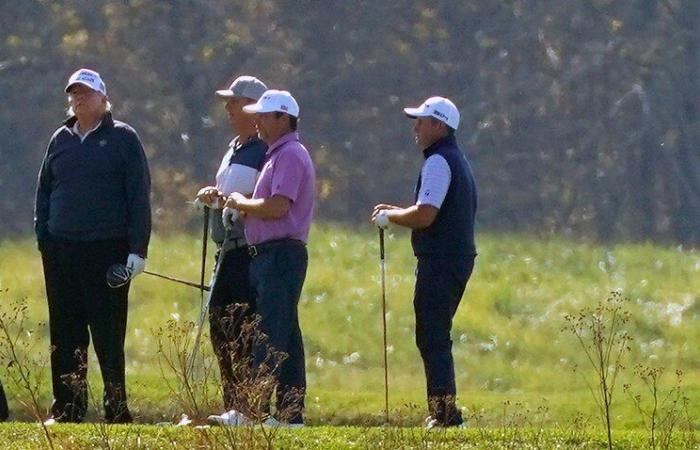 Incumbent President Donald Trump holds on to his political life and refuses to accept the reality of democratic victory in the United States election.

Mr Trump was out on his Virginia golf course when several U.S. networks finally stated his political rival Joe Biden had won Swing State Pennsylvania and the 270 votes it took to win.

The president immediately accused his political rival of “falsely posing as a winner”.

“We all know why Joe Biden is rushing to falsely pretend to be the winner, and why his media allies go out of their way to help him: They don’t want the truth to come out,” Trump said in a brief statement.

“The simple fact is that this election is far from over.”

Mr Trump stressed that states had not yet confirmed the results and his campaign had introduced several “legitimate legal challenges that could determine the ultimate winner”.

The president also used his favorite social media platform, Twitter, to get his message across, tweeting in capital letters “I WON A LOT OF THIS VOTE!”

Shortly after posting the tweet, Twitter checked the tweet and added a warning that read, “Official sources may not have called the race when this was tweeted.”

A few hours later, Mr Trump followed this tweet with two others who claimed he won “the most votes for a seated president.”

He also falsely claimed he won the election and repeated unsubstantiated allegations of election fraud.

It comes after President Trump confronted the media on Friday for alleging without evidence that Democrats were trying to “steal the elections”.

He also falsely stated that he won the swing state of Pennsylvania long before the count finished, and said he was on track to win another major battlefield, Arizona.

Sick of news that his father lost the election, Eric Trump tweeted a post claiming Pennsylvania ignored the Supreme Court.

The President’s other son, Donald Trump Jr., said earlier Friday, “The number one thing Donald Trump can do in these elections is to fight each of these fights to the death.”

There was no word from Mr. Trump’s daughter and advisor Ivanka Trump or Vice President Mike Pence, who were silent on Twitter immediately after the defeat.

Prior to the election, Mr Trump refused to commit to a peaceful transfer of power if he lost.

Instead, he filed a series of lawsuits challenging the results, but election officials in states across the country say there is no evidence of significant fraud.

A US Supreme Court judge on Friday denied a motion by the Pennsylvania Republicans to immediately stop counting post-polling ballots and referred the appeal to the court of law on trial on Saturday.

The final petition for an injunction was against thousands of ballots and was tabled as Mr Biden solidified his leadership and was ready to defeat President Trump.

Mr Trump is now joining a rare club of US presidents who lost re-election.

Since World War II, only two other presidents who have asked for a second term have failed: Jimmy Carter and George HW Bush.

These were the details of the news Donald Trump goes golfing and refuses to allow Joe Biden to... for this day. We hope that we have succeeded by giving you the full details and information. To follow all our news, you can subscribe to the alerts system or to one of our different systems to provide you with all that is new.