Donald Trump, an incendiary president who burned down in four years 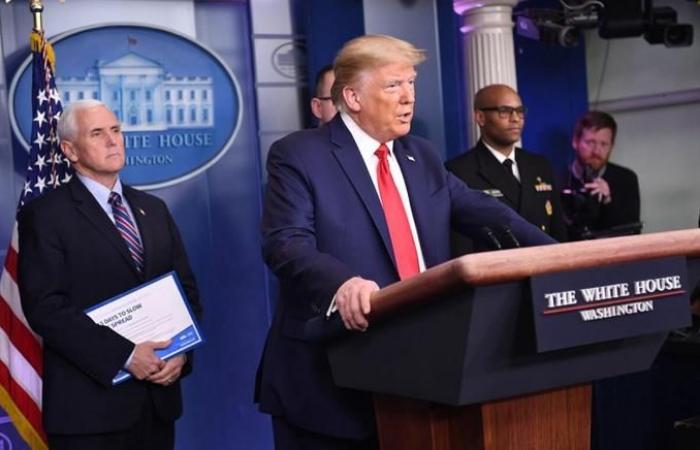 Donald Trump set fire to the political world of the United States in 2016 and never looked away from those flames, which spattered his four years in power with scandals but were not enough to guarantee him a second term in a country worn out by the pandemic and the economic crisis .

The president has made it clear that he will not easily accept defeat and is still confident in his legal maneuvers to challenge the scrutiny in several key states, but the projections of the main media proclaimed the victory of his rival, Democrat Joe Biden on Saturday.

The announcement set a deadline – next January 20 – to the extraordinary Trump presidency, which has divided the country and the world like perhaps no other US president and has deepened political and social fractures that will remain open long after he leaves the White House.

Guided his entire life by a strong need for approval, the president left his skin in dozens of rallies during a long and intense campaign, but failed to revive the options he had earlier this year, when he was confident of a comfortable re-election thanks to the good performance of the economy.

Worn out by the astronomical death toll from COVID-19, the country’s worst economic crisis since the Great Depression, and a popular movement against racism, Trump became the 11th single-term president in U.S. history. , something that had not happened since the defeat of George HW Bush in 1992.

THE INSURGENT IN THE WHITE HOUSE

When it came to convincing voters, the president entrusted himself to the same electoral strategy that worked for him in 2016, that of emerging as an enemy of the country’s political apparatus.

It did not matter that Trump is now the one who heads a large part of that apparatus: in his imagination and that of his followers, the supposed “deep state” has always been controlled by the Democrats and their alleged “infiltrators” in the government bureaucracy, and has ties to Biden.

“We have spent the last four years repairing the damage that Joe Biden inflicted in the last 47 years (of his political career),” Trump said during his speech last August before the Republican National Convention.

The 74-year-old former businessman continues to perceive himself as someone outside the cogs of what he defines as the “swamp” of Washington, despite the fact that, since he came to power, he has nurtured the interests of many of the most powerful of that apparatus, including lobbies that aided his reelection campaign.

By going down the golden escalators of the Trump Tower in 2015 and announcing his presidential campaign, the then real estate mogul became the Republican Party’s worst nightmare, but that formation ended up conforming to the president, leaving behind some of his figures and key priorities.

THE REACTION TO OBAMA

Since coming to power in January 2017, Trump has embraced provocation as a form of government and a tool of distraction, attacking the media and putting the country’s institutions to the test, whose courts have processed hundreds of lawsuits against many of their policies.

The president has revolutionized Washington through Twitter and regularly manipulates or exaggerates the facts, with more than 22,000 lies or false claims since he came to power, according to the count of The Washington Post newspaper.

With the slogan “America first”, Trump has turned the relationship with Washington allies such as Canada and the European Union upside down, has starred in a historic rapprochement with North Korea that has been stagnant for more than a year and has made China his worst enemy, with a trade war.

His rise to power was a reaction to the mandate of his nemesis, former President Barack Obama, whom Trump has led racist attacks since 2011 and whose legacy he has endeavored to destroy from the White House, by withdrawing from the Iran nuclear deal and the Iran pact. Paris on the climate, in addition to freezing the thaw with Cuba.

Although Trump has rolled back many of Obama’s regulations and appointed a record of conservative justices in federal courts, including three in the Supreme Court; has failed to deliver on one of his key campaign promises: repeal the 2010 health care reform, known as “Obamacare.”

IN THE SHADOW OF THE WALL

Its other star promise, the construction of the wall on the border with Mexico, has partially fulfilled: it has managed to erect almost 640 kilometers (400 miles) of barrier, although the vast majority replaced an existing fence; and there is no indication that the neighboring country will bear the costs, as Trump assured.

On immigration, Trump has profoundly eroded the right of the undocumented to seek asylum, sending them to Mexico to wait for months for a U.S. court date, while attempting to constrain legal immigration and profiling the undocumented as criminals, without nuances.

Trump has spent almost his entire term under investigation: first was the investigation into the Russian plot of special counsel Robert Mueller, which concluded in 2019 without major consequences; and then the impeachment trial ended last February, which acquitted the president of two charges for his pressure on Ukraine.

THE RISE OF A MAGNATE

Born in 1946 in New York to a family descended from German immigrants, Donald John Trump graduated in Financial Economics and at the age of 28 took over from his father’s real estate company to later enter the casino sector, with a promotion in complicated occasions and marked by debts.

Producer of the Miss Universe and Miss America beauty pageants, Trump premiered his own television program last decade, “The Apprentice” (“The Apprentice”), where several candidates competed for a job in his corporation, something that fueled his fame and boosted his presidential career.

These were the details of the news Donald Trump, an incendiary president who burned down in four years for this day. We hope that we have succeeded by giving you the full details and information. To follow all our news, you can subscribe to the alerts system or to one of our different systems to provide you with all that is new.