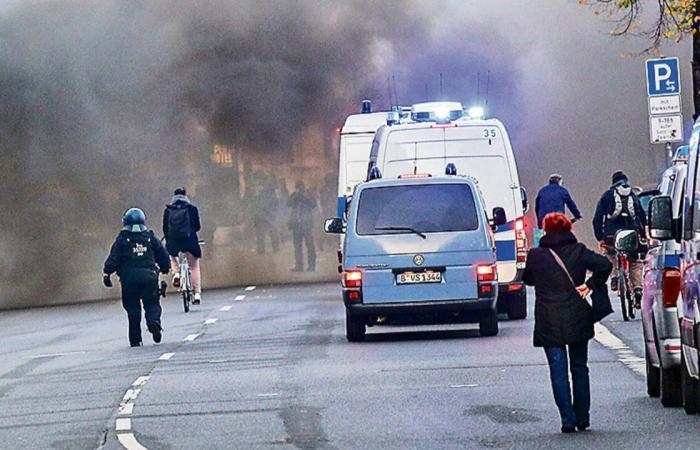 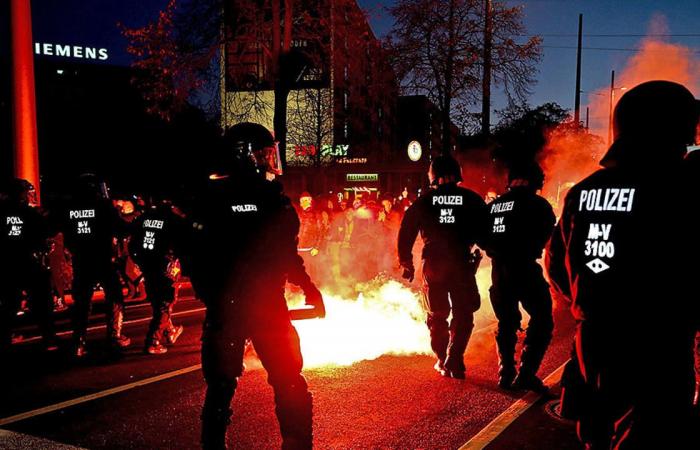 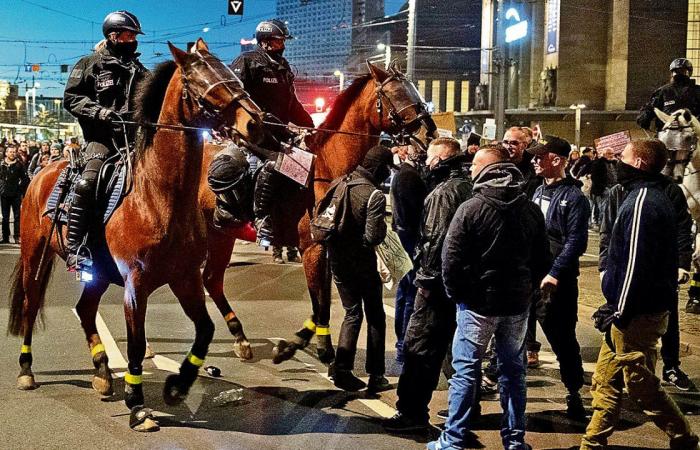 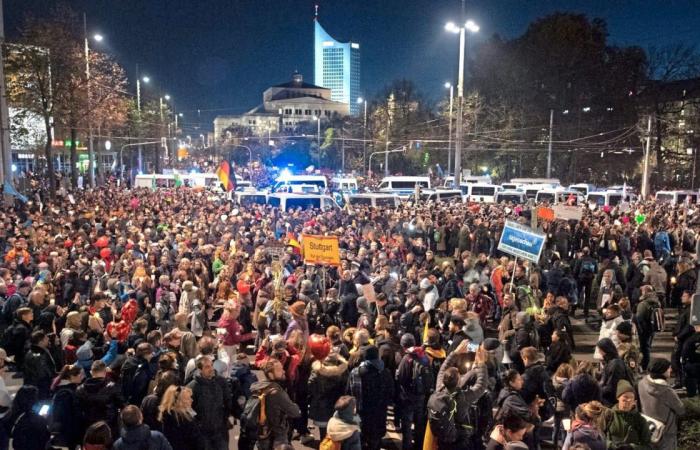 The “lateral thinker” demo in the city, approved by the Higher Administrative Court for 16,000 participants, with distance and mask.

The requirements, a joke. The police, completely overwhelmed.

1.30 p.m. on Augustusplatz at the famous Gewandhaus: The satirist Uwe Steimle (57), shot by the MDR, takes the stage disguised as GDR head of state Erich Honecker – and the crowd shouts the famous Honecker slogan: “Always forward, never backward!”

2 p.m .: The mood is heated. There is violence between Corona critics and their opponents, between neo-Nazis and antifa activists. More than two dozen counter-demonstrations are registered. Policemen (from nine federal states) are pelted with stones and bottles. There are first arrests.

2.30 p.m.: More and more people flock to Augustusplatz. The organizers temporarily interrupt the demo, calling on the participants to make full use of the space and also to use side streets. There are clearly well over 20,000 people there.

3 p.m.: The police repeatedly call participants with loudspeakers to adhere to the Corona requirements: keep your distance, wear a mask. Without success!

3.10 p.m.: Thomas Berthold (55), soccer world champion from 1990, takes the stage with his wife. He lets himself be celebrated as a “defender of democracy” and criticizes the lockdown: “We can no longer put up with all this shit!” The demonstrators shout “Peace, freedom, no dictatorship” and show banners showing Chancellor Merkel in prison clothes see is.

3:35 p.m.: The police break up the demo. The researchers in the “Counted” group even speak of 45,000 participants. And: According to the police, 90 percent of them do not wear a mask. The police asked the demonstrators to vacate the square. An organizer shouts into the microphone: “The meeting has been dissolved! Please behave peacefully. “

4.30 p.m.: There are still 10,000 protesters on Augustusplatz. Tens of thousands move through the city. There is violence especially at the main train station. Police officers are fired at with flares, journalists are attacked and threatened with death.

5.15 p.m.: Thousands of Corona critics shout: “Merkel has to go!” And “We are the people!”. Many resist the police, throwing smoke bombs and pyrotechnics at them. The officers defend themselves with pepper spray and also use a cavalry team.

5.42 p.m.: The left-wing alliance “Leipzig takes a seat” urgently advises the counter-demonstrators to withdraw from the city center: “We consider the situation too dangerous.”

6:03 p.m.: The police give up, let the demonstrators at the main station and walk across the inner city ring – although this was prohibited by a court and the demo has long been dissolved.

6.30 p.m.: Thousands of Corona deniers and right-wing radicals move unhindered, but accompanied by police through the city, back to Augustusplatz.

6.42 p.m.: The police tweeted: “There were numerous attacks on emergency services at the barriers.”

7:08 p.m.: According to the “Leipziger Volkszeitung”, the corona deniers shout: “Oh, how nice it is.”

By late evening there were no reliable numbers of injuries and arrests.

The scandal day in Leipzig was preceded by a legal tug-of-war over the location of the demo. A chronology:

► The “lateral thinkers” are aiming for a lift over the inner city ring in Leipzig – based on the model of the mass protest against the GDR leadership in autumn 1989.

However: The Saxon Corona regulation only allows “fixed” meetings. Consequence: The city administration orders that the rally should take place on the grounds of the New Fair.

► Saturday morning: The Saxon Higher Administrative Court (OVG) in Bautzen overturns this decision (AZ: 6 B 368/20). The demonstrators are allowed into the city center.

► Condition: The OVG limits the number of participants to a maximum of 16,000 and indicates the obligation to adhere to “corona-related conditions” (masks, distance).

These were the details of the news 45,000 at the lateral thinker demo in Leipzig: at 6:03 p.m.... for this day. We hope that we have succeeded by giving you the full details and information. To follow all our news, you can subscribe to the alerts system or to one of our different systems to provide you with all that is new.