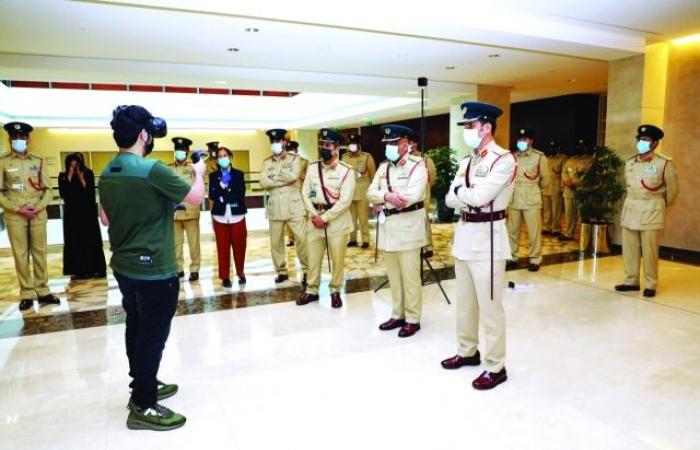 His Excellency Lieutenant General Abdullah Khalifa Al Marri, Commander-in-Chief of Dubai Police, was briefed on the “Virtual Training Simulation” project, which is one of the projects for virtual reality applications in training and qualifying experts of the Dubai Police General Command, as part of the “Expert Accelerators” program implemented by the Dubai Police Scholars Council In cooperation with the General Department of Forensic Evidence and Criminology and the General Administration of Training, the “Virtual Training Simulation” project aims to train and qualify Dubai Police experts to deal with crime scenes and all disciplines and police operations.

His Excellency Lieutenant General Abdullah Khalifa Al Marri affirmed that the Dubai Police General Command is keen to foresee the future and benefit from artificial intelligence programs in combating and reducing crime, thus contributing to achieving its strategy to make Dubai a safe and happy city.

He explained that Dubai Police is keen to harness technology and modern technical developments in various fields, including raising the efficiency of employees, developing their cadres, and achieving their goals.

The “Virtual Training Simulation” project comes within the framework of the Dubai Police General Command’s continuous efforts to build its competencies and cadres and establish a culture of innovation in the institutional work environment, by providing training services with international specifications to enhance security work and building smart learning systems that keep pace with future developments and changes.

These were the details of the news Abdullah Al-Marri: Dubai Police use artificial intelligence to fight crime –... for this day. We hope that we have succeeded by giving you the full details and information. To follow all our news, you can subscribe to the alerts system or to one of our different systems to provide you with all that is new.

PREV US, China agree to cooperate on climate crisis with urgency
NEXT Youth join mainstream as India unveils development initiatives in Jammu and Kashmir