Trump is “afraid” of going to prison in case of loss... 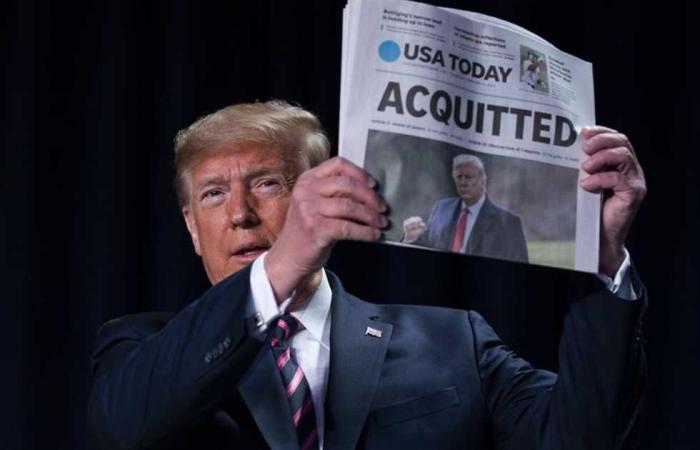 US President Donald Trump is afraid of being defeated in the elections he ran against the Democratic candidate, Joe Biden, not only because he lost his position as President of the White House, but because he will be subjected to legal, criminal and civil lawsuits alike once he loses the protection benefits he enjoys in Presidential office.

Trump used the so-called “executive privilege”, a right used by the US President, which prevents him from being summoned to trials or testifying against him, but that will change if he loses to Joe Biden, which seems possible now.

In this regard, informed sources inside the White House told the British newspaper the Mirror that Trump’s explosive emotions that the elections were stolen from him are fueled, in part, by his fear of being thrown in prison.

Former US federal investigator Harry Sandyck confirmed that leaving Trump to the post in all cases will make his prosecution easier for investigators and plaintiffs in civil cases against him, saying: “He is claimed, for example, that he enjoys higher protection than summoning the courts in criminal cases and summons. Parliament on the part of Congress, and all of this is based largely on his being the president.

The report added that the president’s legal team tried in September last year to cancel a subpoena from the Manhattan district office, which had applied for eight-year tax returns.

The report added that in addition to the Manhattan District Attorney’s investigation at the Trump Foundation, there are defamation cases that began due to Trump’s denial of accusations by dozens of women that he had sexually assaulted them, among them writer A Jean Carroll, who accused him of raping her in the changing room in Manhattan at the Birdorf Goodman store in the middle of The 1990s, while Trump simply responded about Carroll’s claims, saying, “It’s not my type,” while refusing to provide a sample of his DNA.

The report referred to another defamation case due to be heard, which former trainee Samar Zervos filed against him, accusing him before the 2016 elections, when he was a candidate at the time for the presidency, that Trump in 2007 kissed her aggressively and sexually harassed her.

The report confirmed that investigators had summoned Trump because of detailed documents on trade deals and tax records, which Trump had consistently resisted.

He pointed out that at the top of the criminal investigation, a case is being pursued by the New York City Attorney General, who is urging a civil investigation into the “Trump Foundation”, as they consider whether the company made false valuations of several assets, in addition to inflating or reducing their value as the case requires to secure loans or Tax evasion, noting at the same time that the Maryland and Washington attorney general sued the president three years ago, claiming that he was corruptly profiting from the presidency by putting the interests of American citizens at his disposal, to win millions of dollars.

The report confirmed that Trump’s golf courses, hotels, residential and office towers will be the focus of the investigations.

These were the details of the news Trump is “afraid” of going to prison in case of loss... for this day. We hope that we have succeeded by giving you the full details and information. To follow all our news, you can subscribe to the alerts system or to one of our different systems to provide you with all that is new.