‘Morocco will remain firm on its positions 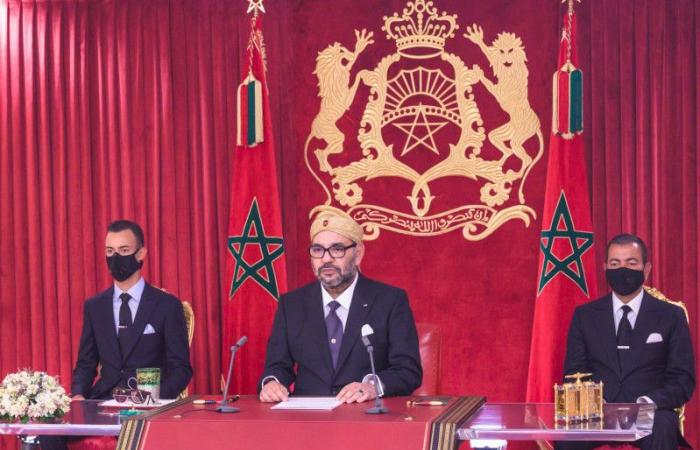 King Mohammed VI delivered a speech on Saturday on the occasion of the 45th anniversary of the Green March.

Here is the full text of the royal speech:

“Praise be to God, Prayer and salvation to the Prophet, His family and His companions.

Today we are commemorating the forty-fifth anniversary of the Green March, which was a unique model of collective mobilization, commitment, discipline, attachment to good law.

Indeed, it is as sincere patriots that Moroccans responded spontaneously to the call of the architect of the Green March, Our Venerable Father, the late His Majesty King Hassan II, that God have his soul.

The whole world discovered how the Moroccan people knew how to meet challenges. And so, by this peaceful march which found a happy outcome in the recovery of our Southern Provinces, we entered masterfully into the annals of history.

In this, the Green March does not only represent a major national event and a salient step in the process of completing our territorial integrity. It also embodies a dynamic whose spirit is perpetuated and renewed through the action carried out to consolidate the Moroccan character of the Sahara on the international scene and to erect the Sahara as a driving force for regional and continental development.

In this regard, the past few years have seen tangible developments at several levels:

At the level of United Nations : the outdated and unrealistic approaches and theories were definitively destroyed when the last Security Council resolutions were adopted.

These recent resolutions have also confirmed the effective participation of real parties involved by this regional conflict and they have established the irreversibility of the political, realistic and consensual solution.

This orientation is in keeping with the spirit of theMoroccan autonomy initiative, supported by the Security Council and the great powers as the only logical option to settle this conflict.

At the level of the African Union: Thanks to the return of Morocco to its African family, the Organization has successfully closed the chapter of the incessant maneuvers of which it was a victim for years.

Since then, the African Union has adopted a constructive approach based on full support for the efforts made, under a exclusive mandate by the United Nations, by its Secretary General and the Security Council.

On the legal and diplomatic level: Several sister countries have opened consulates generals in the cities of Laâyoune and Dakhla, thus recognizing, in a clear and distinct manner, the Moroccan character of the Sahara and affirming to be fully confident as to the security and prosperity which reign in our Southern Provinces.

At the same time, the vast majority of members of the international community refuse to align themselves with the theses of the other parties. In fact, 163 countries, representing 85% of United Nations Member States do not recognize the dummy entity.

The great powers have concluded partnerships including reserve the southern provinces

This orientation has been reinforced by the great powers which, in this area, have adopted constructive positions, in particular the conclusion of strategic and economic partnerships including, without exception or reservation, the southern provinces of the Kingdom as an integral part of Moroccan territory.

Based on these achievements, Morocco reaffirms its sincere commitment to collaborate with His Excellency the Secretary-General of the United Nations, within the framework of respect for the Resolutions of the Security Council, with a view to reaching a final solution, on the basis of the Autonomy initiative.

Moreover, Morocco will remain firm in its positions and will not allow itself to be flexed by the sterile provocations and the desperate maneuvers of the other parties. Moreover, it is clear that the consummate decline of their outdated theses has precipitated them into the typical scenario of a headlong rush.

In this regard, We reiterate our categorical rejection of the unacceptable actions by which we seek to impede the flow of traffic between Morocco and Mauritania, to alter the legal and historical status which prevails east of the security wall or to indulge in an illegitimate exploitation of the region’s resources.

Morocco, true to itself, will not depart from the common sense and wisdom it is accustomed to. On the other hand, it is with the utmost vigor and firmness that it will oppose abuses seeking to undermine the security and stability of its Southern Provinces.

On the other hand, we are convinced that the United Nations and MINURSO will continue to fulfill their duty by ensuring the preservation of the ceasefire in the area.

Our commitment to consolidate the Moroccan character of the Sahara at the international level is matched only by Our sustained action so that our Sahrawi provinces become an engine of regional and continental development.

Also, in order to complete the major projects underway in our southern provinces, the time has come to highlight the many potentialities that their maritime domain conceals.

In this regard, during this year, and in full compliance with the principles of international law, Morocco completed the delimitation of its maritime spaces, incorporating them into the Moroccan legal arsenal.

In addition, Morocco will continue, with constancy, the dialogue initiated with our neighbor, Spain, about the areas of overlap of the territorial waters of the two friendly countries.

This dialogue will be part of the law of the sea and will respect the partnership that unites them, far from any unilateral desire to impose a fait accompli.

In fact, by clearly defining the framework and the borders of the maritime areas placed under the sovereignty of the Kingdom, the plan implemented to boost the socio-economic development of the region will undoubtedly be consolidated.

Based on this vision, the South Atlantic coast of the Kingdom, located opposite the Moroccan Sahara, will constitute a maritime interface for economic integration and a focal point of continental and international influence.

In fact, Tanger-Med is already recognized as the leading port in Africa; the Dakhla Atlantic port will contribute to confirming this trend.

In addition, We will continue to work for the development of a true maritime economy in these territories which We cherish so much. This area, which abounds in resources and potential, on land and at sea, will thus serve as a bridge and a link between Morocco and its African depth.

In this regard, it is important to invest in maritime areas, both for the desalination of seawater and for the use of renewable energies of wind or tidal origin.

At the same time, we must continue to promote the maritime fishing sector, given its role in the development of the region’s economy.

In addition, for the Azur plan to become a strategic lever in the service of the revival of the tourism sector in the region and for it to assert itself as a true destination for seaside tourism, it is important to breathe new life into it.

Unfailing loyalty to the spirit and to the eternal oath of the Green March demands that all Moroccans remain mobilized and vigilant and that they endeavor to meet internal and external challenges with seriousness and responsibility.

We will thus be able to carry out the social and economic development projects of our country; we will continue to defend our interests and our just causes and to strengthen Morocco’s place in its regional and international environment.

It is also an opportunity for Us to pay homage to the immaculate memory of the brave martyrs of the Fatherland and to address the expression of Our consideration to Our Royal Armed Forces and to the security forces, all categories combined, for their constant mobilization to defend, under Our command, the territorial integrity of the country and to preserve its security and stability.

These were the details of the news ‘Morocco will remain firm on its positions for this day. We hope that we have succeeded by giving you the full details and information. To follow all our news, you can subscribe to the alerts system or to one of our different systems to provide you with all that is new.