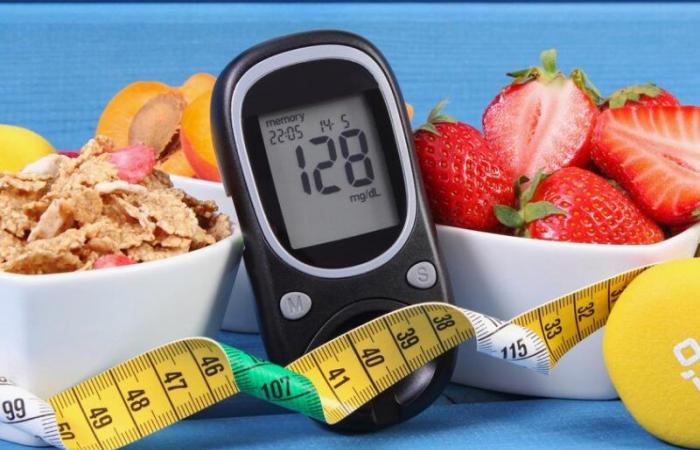 A healthy and balanced diet is essential for patients, especially diabetics, to prevent any complications that may threaten the patient’s life.

A recent study found that following a certain diet led to the elimination of diabetes among people with it, and to their disposal of drugs, as they no longer needed to take them. So what is this magic diet?

The study was conducted by researchers from the United Kingdom, including David Onwin, and published in the journal BMJ Nutrition, Prevention & Health.

The diet – which scientists have revealed is able to reverse diabetes – is a low-carbohydrate diet, in which participants ate less than 130 grams of carbohydrates per day, and the bulk of the diet consisted of vegetables, fish, meat, full-fat dairy products, eggs and nuts. And berries berries.

The study included 199 people, ranging in age from 24 to 91 years, 128 of whom had type 2 diabetes, while 71 had pre-diabetes. Participants followed a low-carb diet for an average of 23 months.

We emphasize here that the study data and advice are for general guidance only and are not a substitute for consulting a doctor, so do not stop taking any treatment, and consult your doctor about whether a low-carbohydrate diet can help you control diabetes.

Prediabetes, a condition that means that a person’s blood sugar level is lower than the diagnosis of diabetes, but at the same time it is higher than the normal level. When not dealing with this situation, the person will develop type 2 diabetes within 10 years or less.

Type 2 diabetes is a chronic disease that occurs due to the occurrence of resistance to the hormone insulin – which is responsible for introducing glucose into the cells – which leads to its accumulation and rise in the blood, and leads to major complications for the patient’s health.

The danger of “pre-diabetes” comes from the fact that it usually leads – if not dealt with adequately – to developing type 2 diabetes, which exposes the person to complications such as blindness, amputations, heart disease, high cholesterol and stroke.

The researchers found that when following the low-carb diet, type 2 diabetics – who were receiving treatment – decreased their average weight from 99.7 to 91.4 kilograms, and the average cumulative HbA1c decreased from 65.5 mmol / mol to 48 mmol / mol.

The very important factor here is that 46% of patients with type 2 diabetes no longer need to take medication for diabetes.

The cumulative blood sugar test is one of the tests performed to assess the level of glucose in the blood, in order to diagnose diabetes and evaluate blood sugar control in patients.

These were the details of the news An “amazing” diet cures diabetes for this day. We hope that we have succeeded by giving you the full details and information. To follow all our news, you can subscribe to the alerts system or to one of our different systems to provide you with all that is new.