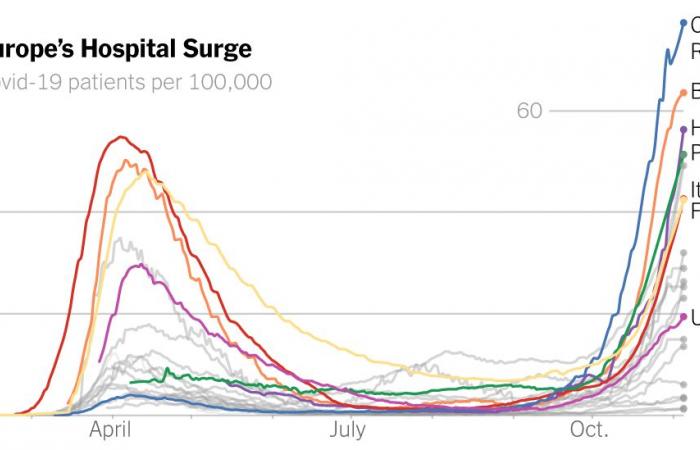 LONDON – More Europeans are seriously ill with the coronavirus than ever before, as new hospital data shows for 21 countries, beating the worst spring days, threatening to overwhelm congested hospitals and exhausted health professionals.

New lockdowns have not yet stopped the current influx of patients, which has only accelerated since growth began in September. This comes from official current patient counts collected by the New York Times. More than twice as many people in Europe are hospitalized with Covid-19 as in the USA, adjusted to the population.

In the Czech Republic, the nation hardest hit in recent weeks, one in 1,300 people is currently hospitalized with Covid-19. In Belgium, France, Italy and other countries in Western Europe, a new surge in patients has brought hospitals to levels last seen in March and April.

“Doctors and nurses could be forced to decide which patients should be treated, who will live and who will die,” Prime Minister Boris Johnson told the House of Commons on Monday. “I’m afraid the virus is doubling faster than we could ever imagine adding capacity.”

Where people are sick from the coronavirus

Sources: European Center for Disease Prevention and Control; Joint research center of the European Commission. Hospital data for Europe includes 21 countries reporting daily hospital occupancy data to the ECDC. Germany, the Netherlands and others are omitted. The spring peak is the highest since March and April, with the exception of Hungary, where data collection began in May. Current patients in hospitals reflect the latest available data.

Many politicians, including Mr Johnson, waited for full bans to be in place and resisted the first signs that the situation was getting worse. These delays can now prove costly.

Countries across Europe are trying to find solutions. Swiss authorities have approved the deployment of up to 2,500 military personnel to help hospitals cope with increasing infections in the country, while others like France have postponed non-emergency surgeries. In Belgium, the staff shortage has led some hospitals to ask doctors and nurses who have tested positive for the virus but have no symptoms to keep working.

Even if new control measures are effective in curbing the spread of the virus, it could be weeks before they relieve hospitals. People entering hospitals now may have been sick for a week or more after being exposed.

Public health officials face additional hurdles during this wave. Colder weather brings people indoors, which may make the virus easier to spread. And many people are fed up with the restrictions after having endured them for almost a year, making enforcement efforts difficult.

On Tuesday, French Health Minister Olivier Véran described how French hospitals are filling and young patients are in critical condition.

The current wave of infections in Europe is partly due to the relative normality this summer. Unlike the US, where the epidemic reached a second peak in July and set records that month, travelers roamed Europe, students returned to campus, and many large gatherings resumed as the virus continued to spread.

There is hope that no place will know the extent of death, the Bergamo, Italy; New York City and Madrid suffered this spring. The spread of the virus is now better known, and treatments have improved so that sick people have a better chance of survival. The tests have been rolled out across Europe so that countries can identify outbreaks earlier if they are easier to contain.

However, experts say the increased number of Covid-19 patients means an increase in deaths, which have already increased in many countries.

These were the details of the news Europe’s Covid-19 hospital crisis is getting worse, surpassing spring peak for this day. We hope that we have succeeded by giving you the full details and information. To follow all our news, you can subscribe to the alerts system or to one of our different systems to provide you with all that is new.