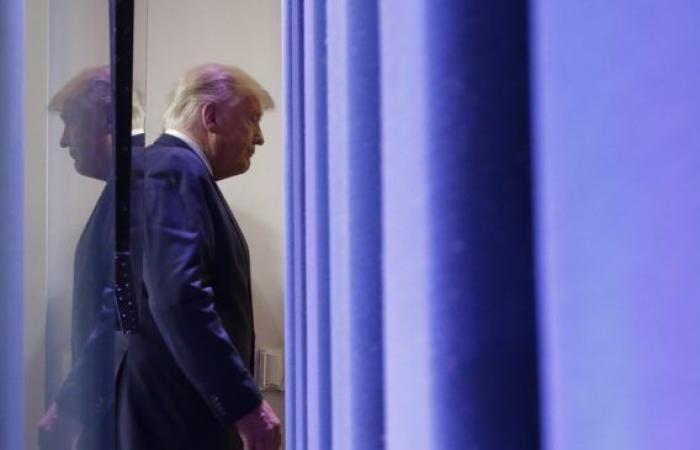 President Donald Trump again took a hard line on Friday night against what he claims is election fraud.

This is the second time he has made undocumented allegations of cheating from the podium in the White House, since election night.

– There has been cheating in the election, but it comes from the Republicans.

– They have tried for several years to exclude African-American voters from the electoral register. They believe we should not vote by mail. They intervened in the mail to delay the delivery of the ballot papers. They have been fooling around with the election, she says.

She explains that many Democrats have doubts about this.

– They ask basic questions about how this played out at the state level.

The Republican Party of Nevada has provided a list of 3,062 cases of what they believe is election fraud to Attorney General William Barr. Trump has announced that he will take legal action against all the last states where Joe Biden has declared victory.

In Michigan, it has already been clarified that the Trump campaign’s lawsuit to stop the vote count will not be upheld. In Georgia, too, the lawsuit has been rejected.

The Trump campaign’s official Twitter account wrote on Wednesday that Democrats are trying to steal the election, asking voters to defend the election and fight back. The campaign has repeated this message in a number of emails.

Dagbladet has received these e-mails. The e-mail from Thursday, which calls for defending the election, is signed by Donald Trump.

In another e-mail, signed “Team Trump”, the Trump camp writes that “Trump led in many important states – which were run and controlled by Democrats. Then, one by one, the leadership magically began to disappear as surprising ballots were counted. VERY STRANGE, and the “polls” got completely and historically wrong! “.

The Trump campaign also writes that “it is obvious that the Americans want four new years with Trump, but that it will not stop the radical left from creating CHAOS and CONFUSION”.

At the same time, the Trump administration is asking for donations to continue the fight against “Democrats and their fake news friends undermining the election.”

After Trump called for a fight back, there have been a number of demonstrations. In Pennsylvania, Trump voters are demanding that the count be stopped. In Arizona, the opposite is true. There they demand that all advance votes be counted.

– This is a hypocrisy of a completely different world, US expert Eirik Løkke, advisor in Civita, has previously stated to Dagbladet.

Several armed protesters gathered Friday night outside a polling station in Phoenix, Arizona. The demonstrations have caused many to react, because it disrupts the count.

“Being there causes delay and unrest, and prevents employees from doing their jobs,” Arizona Chief Executive Katie Hobbs told CNN.

Jennifer Leigh Bailey at NTNU thinks this is fundamentally wrong in a democracy – that “now my candidate has got enough votes, so now we must stop”, she points out.

– The point is to sow doubt and drag out time, says Bailey.

Donald Trump threatens to take the count of postal votes to the Supreme Court. If that happens, and they vote for the Republicans, it will be a “real crisis” for the United States, says Bailey, who is himself an American.

– If Amy Coney Barrett is among those who support the Republicans, it will be worse. Then I do not know what is happening.

She emphasizes that if Trump succeeds in his threats, the United States has never had such a situation.

These were the details of the news Think Trump’s party is cheating for this day. We hope that we have succeeded by giving you the full details and information. To follow all our news, you can subscribe to the alerts system or to one of our different systems to provide you with all that is new.