Played the intoxication in the World Cup 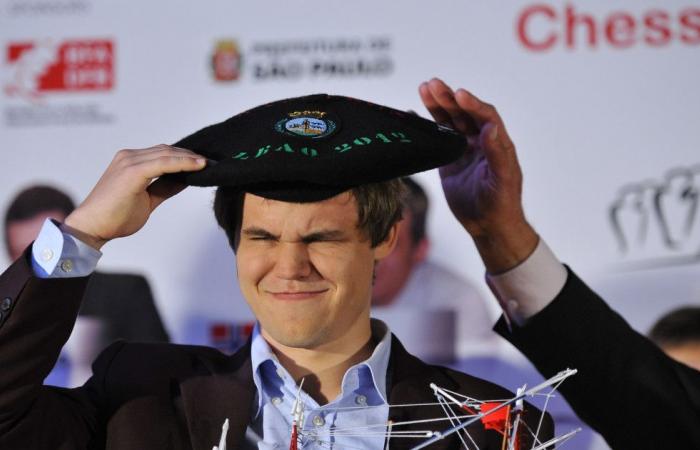 It is in Morten Ramm’s podcast «Must be treated» that Magnus Carlsen eases the veil.

Carlsen is challenged by Morten Ramm to explain what kind of storyteller he is in private, and then he pulls up the story from the World Cup in lightning and fast chess in 2012.

Where he simply decided to run up during the break on the last day of the World Cup and drink vodka.

But there have also been days where it has boiled over for Carlsen, and he has let the “tilt” take over or fallen completely out of rhythm.

Carlsen was on the verge of winning the fast chess for a long time, but little sleep due to a bad stomach meant that he “only took silver”. Carlsen struggled with the game, and it got worse when the lightning jacket continued the following day.

It was so below expectations that several of the competitors reacted with disbelief when they saw the results.

– The first day, I remember that everyone who went to the results sheet had to see several times, says Carlsen in the podcast.

He was in a bad position after the first day, and on the second and last day of the Lightning Chess World Cup, the bad trend continued. Carlsen himself says that he sailed aft and that it “went to hell”.

There and then he decided to take action.

Run in the minibar

And as so many other desperate souls have done before him: Carlsen ran straight to the hotel’s minibar, found a bottle of vodka and left it at:

– I emptied what I managed in a quarter of an hour, says Carlsen in the podcast.

Whether it was the fire water or that Carlsen stopped taking the tournament so seriously is difficult to say, but the 29-year-old managed to break out of the negative spiral after the stunt.

Suddenly it all turned around.

The 29-year-old says that the competitors began to wonder why Carlsen, who had been so angry for many days, was suddenly so happy. And that they reacted to why he played so quickly and confidently.

Carlsen won the last eight games of the day and ended up taking silver in lightning chess, half a point behind Aleksandr Grisjtsjuk.

– There and then I felt like a god. I had a good “buzz” and felt I played fantastically well. I’ve looked at it in hindsight. I did not play very well, but I managed to psyche people out completely, says Carlsen.

Tarjei Joten Svensen, who works as a journalist for Carlsen-owned chess24 and has followed the world champion for a number of years, says that he thinks the story is completely crazy.

– I think it’s cool that he tells openly about it. I do not think the grip is something to recommend to others, but it obviously helped him to get back in the right mode after a miserable start. I have not heard of anything similar before, says Svensen to Dagbladet.

Dagbladet has asked Carlsen’s father and manager Henrik Carlsen for a comment, so far without an answer.

It is unlikely to be a repetition of history in the first place. Carlsen stopped drinking in 2018. He felt he had to take action after delivering below expectations around the chessboard in both 2017 and 2018, and it was one of many moves he took.

– It’s a lot about self-confidence. It’s about having a reserve of energy. There is no hocus pocus that way. There are several little things that click at once, and suddenly things go much better, Carlsen explained to Dagbladet earlier this year.

– That he dropped alcohol completely has contributed to him reaching new heights, so I guess it is a bygone chapter, says Svensen.

Chess expert Atle Grønn laughs well when Dagbladet retells the story. He says that the cocktail alcohol and chess were much more common in the old days:

– There was a great drinking culture in chess before the Magnus Carlsen period. What happened to Magnus was that chess got a more sports culture. Mikhail Tal (world champion in chess eight times), drank constantly during the World Cup in Stockholm in 1960/61. Aleksandr Alekhin was also drunk during the World Cup.

Grønn believes that what is special about Carlsen’s story is that he does not drink as usual, but chose to do it as a stunt in the tournament.

Green says that he and “most other” chess players have tried to combine alcohol and chess:

– You can get into a flow where you feel that this is absolutely beautiful and ask yourself why you do not always do it. But my experience is that it can go right on the snout if you try to repeat it. In the long run, it is probably guaranteed best to never drink, Grønn states.

These were the details of the news Played the intoxication in the World Cup for this day. We hope that we have succeeded by giving you the full details and information. To follow all our news, you can subscribe to the alerts system or to one of our different systems to provide you with all that is new.