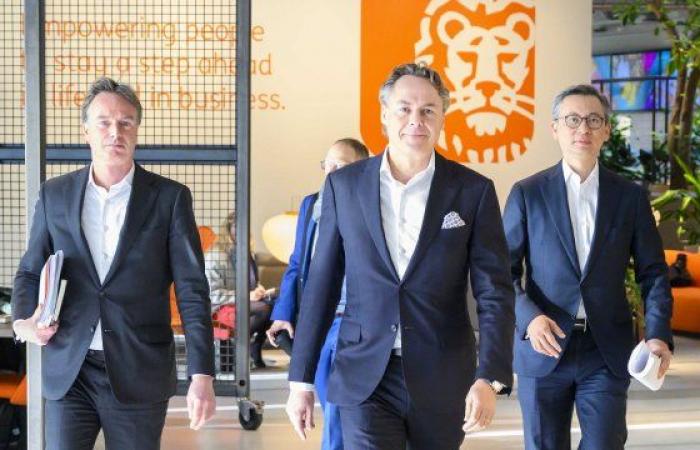 The plans of the previous ING CEO Ralph Hamers to merge bank subsidiaries in different countries are unsuccessful. The scrapping of the European integration project Maggie leads to a write-off of 140 million euros.

Whether he was still in contact with his predecessor Ralph Hamers, who switched to Swiss competitor UBS, a German journalist asked the new ING CEO Steven van Rijswijk during a conference call about the quarterly figures. “Yes, of course, we had a chat this morning,” it sounded. “He wished me the best of luck today.”

If the stock market price is taken as a benchmark, it was not a successful day for Van Rijswijk. The ING share thundered to 9 percent lower and closed 4.8 percent lower, the worst performance in the Bel20 and Amsterdam AEX.

The pandering comes after disappointing figures. Interest income fell by 6 percent and that could not be offset by higher income from investments or insurance. In addition, the company had to set aside extra money for possible credit losses and there were write-offs on the Thai banking subsidiary TMB (230 million euros) and the IT project Maggie (140 million euros).

Maggie, formerly known as Model Bank, was one of Hamers’ big yards. He wanted to merge ING’s activities in four European countries (Spain, Italy, France and the Czech Republic) on one platform with more than 6 million customers. Van Rijswijk is now pulling the plug from that project due to the economic headwind and the experiences with similar integration projects.

ING has tried to fully merge the banking activities in Belgium and the Netherlands in the Unite project. But that was not possible due to opposition from the National Bank and the integration benefits were not achieved. The fact that customers in the Benelux have largely switched to similar apps and web banking is a meager consolation.

The dividend policy is being overhauled. Instead of a progressive dividend that grows with profit growth, ING now pledges to distribute half of its current net profit in cash or through share buybacks.

Hamers had made a strong effort to gradually convert the group of local banks into a single European platform, following the example of American technology companies. In that view, ING could easily make money by negotiating large deals with third parties who can sell their products to millions of audiences through the ING platform.

Maggie will be seriously downsized, but an attempt will be made to become a digital universal bank in a different way, Van Rijswijk emphasizes. For example, the ING branches in the different countries will be able to use functions developed in the same programming language by other branches.

By the end of 2021, ING will cut more than 1,000 jobs in European countries and the investment banking division in Latin America and Asia.

The removal of Maggie and the phasing out of the investment banking division will cost 1,000 jobs by the end of 2021, Van Rijswijk said. It is not clear where the redundancies will be made. The biggest blows to the investment bank are in Latin America and Asia, where offices are closing.

The dividend policy is also being overhauled. Instead of a progressive dividend that grows with profit growth, ING now pledges to distribute half of its current net profit in cash or through share buybacks.

In Belgium, there is no succession yet for the Belgian CEO Erik Van Den Eynden, who left shortly after Hamers’ departure. Van Rijswijk said that ‘the best of internal and external candidates will be chosen’ and that the regulator has yet to give the green light. ING Belgium has been led by financial director Hans De Munck since Van Den Eynden left. ING Belgium saw its quarterly profit more than halve, from 207 million to 92 million euros.

These were the details of the news Ralph Hamers’ legacy weighs on ING for this day. We hope that we have succeeded by giving you the full details and information. To follow all our news, you can subscribe to the alerts system or to one of our different systems to provide you with all that is new.