The Supreme Court, a real ally of Trump? 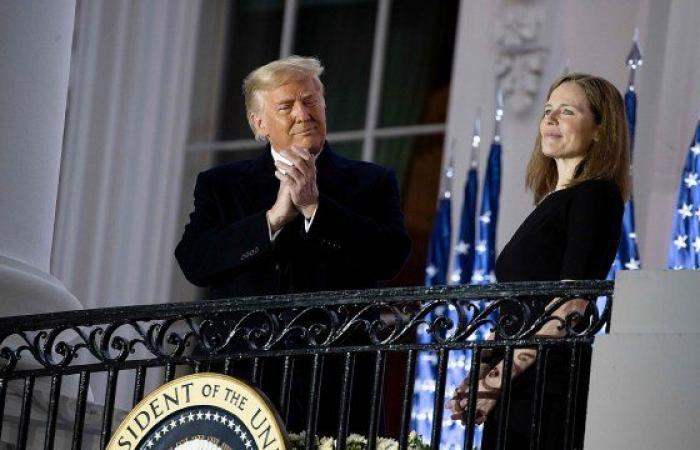 Trump’s threat of recourse to the Supreme Court is far from far-fetched. Especially since several judges of the institution are committed to the conservative cause.

“This is a major fraud against our nation. We want the law to be used appropriately. So we will go to the Supreme Court. We want all votes to stop“, launched on the night of Tuesday to Wednesday, Donald Trump during a speech at the White House. Wednesday, the Republican President again questioned the conduct of the election.
“Last night I was leading, often solidly, in many key states, almost all of them. Then one by one they began to magically disappear as surprise ballots were tallied. VERY STRANGE.”

Thus, Donald Trump denounces “fraud” and counts go to the Supreme Court. Is it really the role of the latter to decide on this subject? We remember that she had intervened in 2000, during the George W. Bush-Al Gore duel. We know that six of the nine Supreme Court justices are conservatives and that the President appointed a week before the election Amy Coney Barrett, saying he wanted it in place to judge possible election disputes.

The remedies of Trump and his team

→ Trump’s campaign team announced a judicial offensive, in the Wisconsin (10 major voters), won by Joe Biden with a difference of less than 1% according to almost complete results, according to several American media. Republicans want to demand a recount of the votes and have asked a local judge to reconsider the ballots already counted.

→ In Georgia (16 electorate voters), State whose electoral results are not yet confirmed, the appeal relates to the county of Chatham. The Republican Party is asking a judge to “secure” and store ballots received after 7:00 pm on November 3, polling day.

→ In the Michigan (16 voters), where an appeal is also initiated by the Trump team, the American media have already confirmed the victory of his democratic rival Joe Biden.

→ The Republicans have also lodged an appeal to obtain the suspension of the counting in the key state of Pennsylvania (20 major voters), the outcome still uncertain.

Partisan judges … or not?

In any case, legal actions could delay the announcement of the final result, from Several weeks perhaps. But Trump shouldn’t go straight to the Supreme Court. His lawyers must first have the case tried by a court of first instance. There they could already come across “understanding” judges, since the President has appointed many federal judges. If this fails, lawyers can appeal and only then go to the Supreme Court. But it will take demonstrate that there has been fraud.

Trump bases his arguments on the postal voting system. For Ed Foley, an expert in electoral law at the University of Ohio consulted by AFP, these votes are correct slowed down the count and explain why the outcome of the ballot remains unknown, but they do not ask “no legal problem”.

What chance of success?

Changing the rules to accommodate the pandemic had been the subject of some 300 court challenges in recent months. Some appeals have already gone to the Supreme Court, including one concerning Pennsylvania. The high court had refused to rule urgently, but could come back. For Professor Rick Haser, author of a blog on electoral law, it is unlikely, because in the name of “the interests of the voters”, she doesn’t like to change the rules of the game after the fact.

As electoral rules vary from state to state, or even county to county, complaints only relate to specific cases, not to a single case. However, for this to affect the outcome of the ballot, the gap between the two candidates must be “extremely tight”, well below 2%, explained to AFP Derek Muller, professor of law at the University of Iowa. This is indeed the case in some states targeted by Trump.

Trump could nevertheless invoke the 14e amendment of the Constitution to bring the case directly to the Supreme Court. But she may or may not choose to look into the case. However, given that it is accused of being increasingly politicized, she might prefer to stay away from the debate. If it takes the case, Camp Biden is not unaware that sit there three former members of George W. Bush’s team.

*The article has been translated based on the content of Source link by https://www.lecho.be/dossier/electionsusa/la-cour-supreme-reelle-alliee-de-trump/10263274.html
. If there is any problem regarding the content, copyright, please leave a report below the article. We will try to process as quickly as possible to protect the rights of the author. Thank you very much!

These were the details of the news The Supreme Court, a real ally of Trump? for this day. We hope that we have succeeded by giving you the full details and information. To follow all our news, you can subscribe to the alerts system or to one of our different systems to provide you with all that is new.