US sanctions on Gebran Bassil? 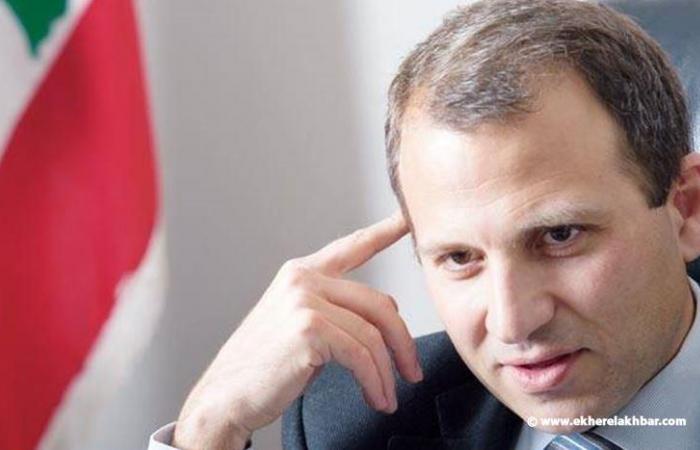 Two sources indicated to Al-Arabiya TV that the President’s administration, Donald Trump, will impose US sanctions on the former Lebanese Foreign Minister, Gebran Bassil, and that the sanctions will be announced on Friday, according to what the Washington correspondent of Al-Arabiya reported.The American Wall Street Journal reported that the US administration will impose sanctions on the former Lebanese official, in an attempt to limit the influence of the Iranian-backed Hezbollah militia on the Lebanese authority.

The newspaper said, citing an informed source, that the sanctions had been approved by the US Treasury and Secretary of State Mike Pompeo, who is expected to reveal the sanctions later on Friday.

It is reported that Gebran Bassil is one of Hezbollah’s Christian allies in Lebanon, son-in-law of the Lebanese president and head of the Free Patriotic Movement.

Last September, the United States blacklisted two Lebanese ministers, and says they assisted Hezbollah, which is backed by Iran.

About two weeks ago, the day after President Saad Hariri was assigned to form the government, the US Assistant Secretary of State for Near Eastern Affairs, David Schenker, declared that Washington “will continue to impose sanctions on Hezbollah and its Lebanese allies and those involved in corruption,” and considered that any new cabinet should implement the necessary reforms. Fighting corruption. ”

In an interview with journalists from various countries, in which Al Arabiya.net participated, he said: “We are involved in the Lebanon file and stand with the Lebanese people, and we are still insisting that every government in Lebanon should bring transparency and reform, as the Lebanese people demand and fight corruption, and that there should be. Accountability for the crimes that have been committed. ”

“These are our preconditions for our continuing to provide aid to Lebanon, and the French have said the same thing as well, and we, along with the international support group for Lebanon, have clearly said that the legitimate aspirations of the Lebanese people should be fulfilled. As for who should be the prime minister, this is a matter for the Lebanese people alone,” he added.

Schenker stressed that “Lebanon is in dire need of economic reform in order to combat poverty and corruption, because the public debt numbers in Lebanon are bad.”

These were the details of the news US sanctions on Gebran Bassil? for this day. We hope that we have succeeded by giving you the full details and information. To follow all our news, you can subscribe to the alerts system or to one of our different systems to provide you with all that is new.