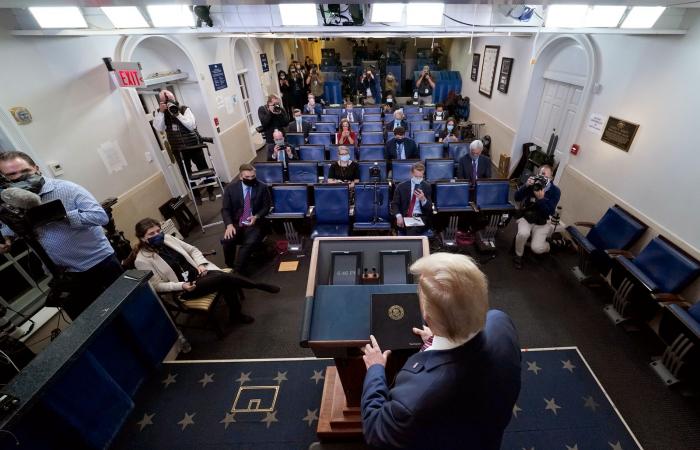 Several elected Republicans express strong opposition to Donald Trump’s speech in the White House on Thursday. There came the president with several allegations of electoral fraud.

CNN cites it as the first sign that Republicans are beginning to prepare for the post-Trump era.

“This is starting to get insane,” said Adam Kinzinger, an Illinois congressman. He describes the president’s statements as misleading.

– There is no defense for the president’s comments tonight that undermine our democratic process. The United States counts votes, and we must respect the result we have always done, says Larry Hogan, the Republican governor of Maryland.

Hogan is considered a possible presidential candidate in 2024, and has previously been critical of Trump.

– If someone has evidence of cheating, it must be presented and processed. Everything else damages the integrity of our elections and is dangerous to democracy, says Congressman Paul Mitchell from Michigan.

Marco Rubio, a prominent senator from Florida, also emphasizes that the system is equipped to handle the election in a good way. He says evidence must be presented for allegations of electoral fraud.

– That’s enough, Mr President. Enough. Spitting out conspiracy theories about the election will not change the outcome. The votes have been cast. The votes will be counted. The will of the people will happen. Your lies undermine our democracy and harm the country. Just stop, she writes

Enough, Mr. President. Enough. Spewing conspiracy theories regarding this election will not change the results.

The votes have all been cast. The votes will all be counted. The will of the people will prevail.

Your lies undermine our democracy and harm our country. Just stop.

At a press conference on Thursday, Trump repeated several allegations of electoral fraud. He did not come up with any documentation that can prove the allegations, writes the news agency AP. CNN and the New York Times also report that not a single piece of evidence was presented for election fraud.

These were the details of the news Several Republicans are reacting strongly to Trump’s speech for this day. We hope that we have succeeded by giving you the full details and information. To follow all our news, you can subscribe to the alerts system or to one of our different systems to provide you with all that is new.