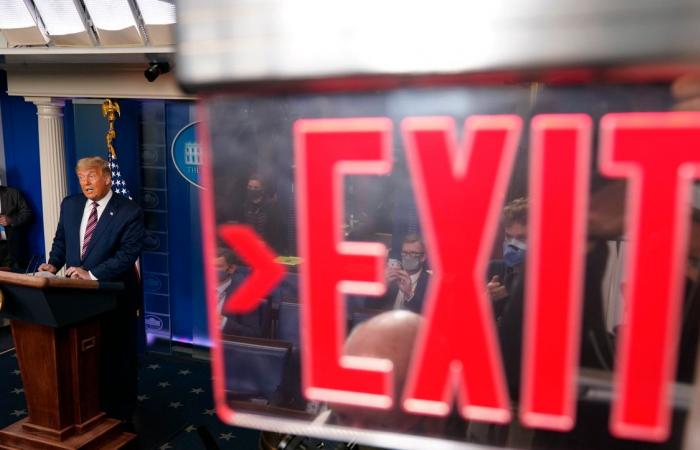 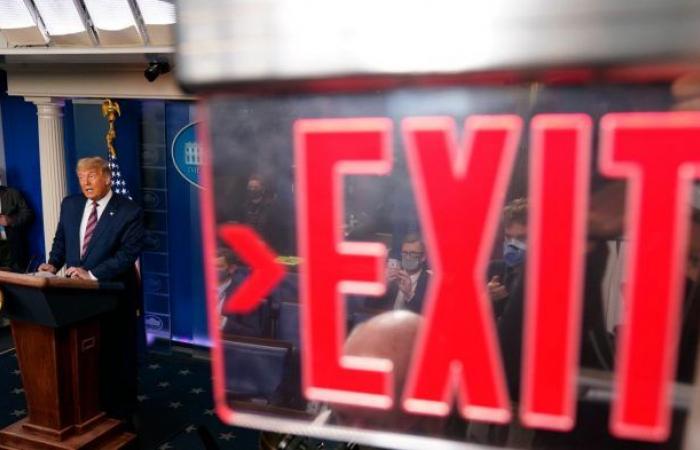 The duel for the presidency has not yet been decided: incumbent Donald Trump still sees himself as the winner of the election in the USA. “If you count the legal votes, I win with ease,” said Trump on Thursday evening (local time) in the White House in his first public appearance since election night.

“If you count the illegal votes, then they can try to steal our elections,” said Trump – and spoke once more without any evidence of alleged “fraud”. He criticized the fact that, to his detriment, poll results were knowingly published before the election. Trump has so far provided no evidence to support his claims that there was massive election fraud. Officials, experts and observers have so far seen no evidence of this.

Several US television stations are said to have canceled the broadcast of Trump’s appearance in the middle. Presumably they did not want to send the unsubstantiated fraud allegations there without classification.

The President particularly attacked the postal votes: “It’s incredible to see how these postal votes are so one-sided.” Trump was referring to the fact that the majority of supporters of his challenger Joe Biden had taken up the opportunity to vote by mail.

Trump announced that he wanted to defend himself massively in court against a defeat: “There will be a lot of lawsuits. We cannot allow an election to be stolen in this way.”

Vice President Mike Pence assured Trump of his support. He stands by the side of the President, wrote Pence on Twitter shortly after Trump finished a press conference in the White House. At the same time he wrote: “We have to count every legal vote.” He wrote “Legal” in capital letters.

Trump’s niece Mary made a disparaging comment on the Republican’s behavior after the US election. “This is what it looks like when a loser loses,” she wrote on Twitter while her uncle was giving the press conference in the White House.

Mary Trump – a PhD in psychology – had published a disclosure book before the election and warned of her uncle’s second term. In an interview with the German press agency, she said that her uncle was a pathological liar and a racist.

In a first appearance after the election, Donald Trump had already claimed election victory on Wednesday night, although no winner had yet been declared in a number of states. The Republican had also announced legal action up to the Supreme Court.

In a series of short messages on Twitter, Trump has since denounced alleged election fraud and called for a count stop without any evidence. His team has already taken legal action against the counts in several states.

So far, no significant cases of election fraud have been reported in the USA. Trump had been claiming for months without evidence that the risk of fraud is higher with postal votes and refused to guarantee a peaceful transfer of power in the event of defeat.

The president currently has only 214 of the 270 electors needed to win. As things stand, his challenger Joe Biden has at least 253 voters. Adding the state of Arizona, where some media outlets have already proclaimed Biden the winner, adds up to 264.

In the states of Pennsylvania and Georgia, Trump’s initial lead is currently shrinking the more ballots received by post are evaluated. Supporters of the Democratic Party had resorted to postal voting more strongly than the Republicans in view of the corona risk. In Pennsylvania, the ballot papers that arrive up to three days after the November 3rd election date are still to be counted. The US Post had been working with delays in the past few months.

*The article has been translated based on the content of Source link by https://www.spiegel.de/politik/ausland/us-wahl-2020-donald-trump-behauptet-erneut-gewonnen-zu-haben-a-8dea65e4-4ab1-45c1-bacb-cf923bf05615
. If there is any problem regarding the content, copyright, please leave a report below the article. We will try to process as quickly as possible to protect the rights of the author. Thank you very much!

These were the details of the news 2020 US election: Donald Trump again claims to have won for this day. We hope that we have succeeded by giving you the full details and information. To follow all our news, you can subscribe to the alerts system or to one of our different systems to provide you with all that is new.