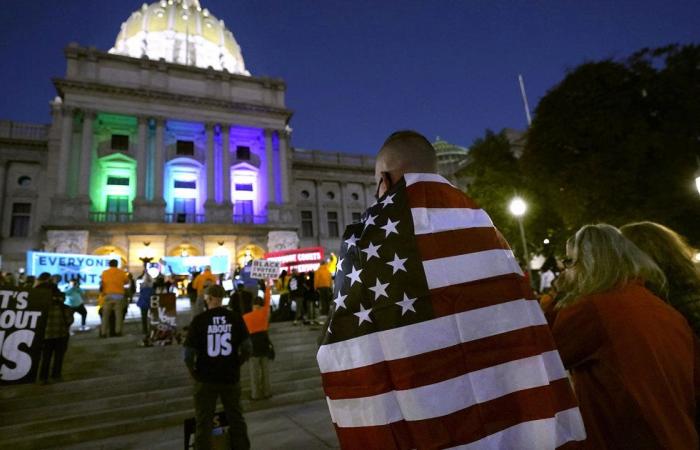 The truth may have come from a high place of lies and human turpitude. When the Supreme Court of Nevada rejected, on the night of November 3, the request to stop the recount of Clark County – where Las Vegas and its casinos are located – requested by the local branch of the Republican Party, his motives summed up the impasse in which the legal guerrillas of the Trump camp could find themselves, despite the contrary claims of its lawyers.

“If your lawyers want to come after us, let them come. They will lose again in court ”

The latter demanded – as they did in the wake of Michigan, Wisconsin and Pennsylvania, three other key states – the immediate end of the count. Reason invoked? The impossibility, for their observers, to get close enough to the ballot boxes during the election day, then during the count. Another complaint in Nevada was about marks left on ballots by the machines used to collect them post-count.

The answer of the magistrates of this State was simple: “Lack of sufficient evidence” and “Gross exaggeration of the difficulties encountered.” Hence the resumption of the counting Thursday morning, under the magnifying glass of all the media because of the importance of the six major voters in the state, likely to allow Joe Biden to reach the figure of 270 synonymous with victory.

The legal arsenal that Donald Trump threatens to use to repair the “electoral theft” of which he claims to be a victim actually looks like a worn-out trap. Long before the ballot, the president was already threatening to take legal action to contest the official result taken out of the polls. Promise kept … but for the time being deemed not very credible by lawyers.

Example in Pennsylvania, the state where recourse has been and continues to be the most numerous. Most of the complaints concern the presumed defective nature of the mail-order ballots (second envelope missing, bad signature, etc.) and the arrival of a limited number of these ballots after November 3. Rudy Giuliani, former mayor of New York and lawyer for Donald Trump, went so far as to seize the State Supreme Court (with a Democratic majority) on Wednesday to invalidate 125,000 ballots sent by mail, because Republican observers did not were not equipped with binoculars when transferring sealed ballot boxes.

The New York lawyer then attacked the city of Philadelphia (Democratic city), accusing its electoral commission of being “corrupt” and “partisan”. Except that in fact, very few electoral incidents were reported: “Our election will not be over until all the votes are counted. And they will be, tweeted state justice minister Josh Shapiro (Democrat) in response to Donald Trump. But if your lawyers want to come after us, let them come. They will lose again in court. ”

If he does not win his case, Rudy Giuliani swears he will bring the Pennsylvania case to the Federal Supreme Court, which Donald Trump vowed to seek again on Wednesday, as his lead began to melt. as and when the votes sent by post are counted (supposed to end this Friday evening). However, here too, beware of the announcement effects.

US laws are clear: every state – not the federal government – is responsible for elections. More importantly: the nine Washington judges (including six Conservatives since Amy Coney Barrett’s appointment in recent days) can only rule on cases of alleged unconstitutionality of a court ruling. It is therefore not at all certain that Giuliani’s complaints reach Washington.

Better still: on October 20, the same United States Supreme Court validated the decision of the Supreme Court of Pennsylvania, based in Harrisburg, to allow the counting of mail ballots mailed no later than polling day if they arrive. before this Friday. A status quo obtained thanks to the conservative judge John Roberts, ally for the occasion with his three liberal colleagues against the four other magistrates of the college. In the absence of a majority, the decision of the magistrates of Harrisburg had been confirmed. The Pennsylvania Election Commission then “set aside”, in separate ballot boxes, these late votes to avoid any accusation. Difficult, therefore, to find the fault.

Save time, and create a fog

The precedent that is in everyone’s mind is obviously that of the duel between George W. Bush and Al Gore in November 2000. The Supreme Court then interrupted on December 12 yet another recount of votes in the disputed state of Florida, where the first had won by 537 votes.

Except that, this time, the electoral reality has nothing to compare, in view of the clear lead of Joe Biden in number of delegates (except huge surprise this Thursday) and the much more substantial difference in votes between the two men, even in the most disputed states. Hence the impression of judicial harassment. “The complaints and the threats of a lawsuit are just attempts to confuse and obscure what is in fact a very transparent and safe process,” said Michigan Home Secretary Jocelyn Benson (Democrat).

A card in the outgoing president’s hand is the possible alliance between his lawyers and the Republican majority that still controls legislative power in three of the states where he demands a count: Pennsylvania, Wisconsin and Michigan. Ed Barnes, former Fox News political reporter, sees it as a loophole: “Legally, the complaints don’t hold up, but if each state’s parliaments get involved, it can create mayhem and save Trump time,” to create a fog that will allow him to say he is unfairly beaten. “

“Legally, the complaints do not hold, but if the parliaments of each state get involved, it can create mayhem”

“Fraud” is the word that keeps coming up in the mouth of the American head of state. But beware, even in a Republican stronghold like Texas, justice has been able to be impartial: the Republicans who demanded the cancellation of 127,000 votes near Houston were rejected. This did not prevent Donald Trump from winning the “Lone Star State” and its 38 delegates on November 3.

“The Florida recount in 2000 was interrupted by the Supreme Court because it constitutionally discriminated against this state compared to others,” said Edward Foley of the University of Ohio in the Washington Post. In 2020, the questions relate to the treatment of legally cast votes. Without clear evidence of fraud, everything will collapse. “

*The article has been translated based on the content of Source link by https://www.letemps.ch/monde/donald-trump-assigne-urnes-justice
. If there is any problem regarding the content, copyright, please leave a report below the article. We will try to process as quickly as possible to protect the rights of the author. Thank you very much!

These were the details of the news Donald Trump sues the ballot boxes for this day. We hope that we have succeeded by giving you the full details and information. To follow all our news, you can subscribe to the alerts system or to one of our different systems to provide you with all that is new.