Bolsonaro is confident in Trump’s victory but wondered about the return... 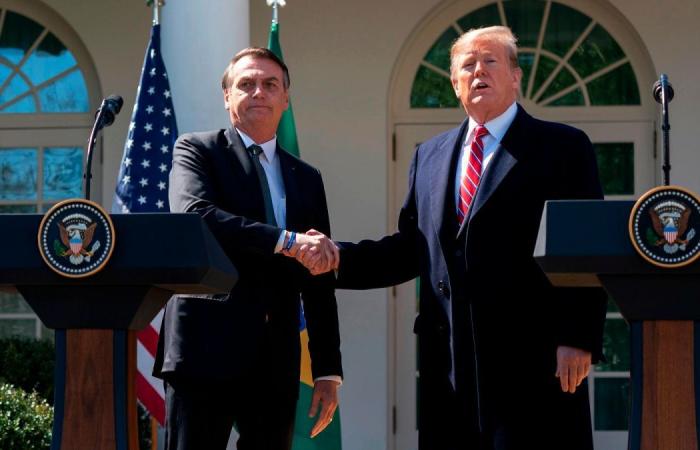 The president, his children and the chancellor Celso Araújo They have automatically aligned themselves with Trump from the beginning of the administration on January 1, 2019 and campaigned for his re-election.

But minutes later on Facebook, Bolsonaro wrote, in line with Trumpism, about the possibility of electoral fraud, risks for Brazil and for its own re-election in 2022 in case the balance of forces changes, especially since the democrat Joe Biden He has already criticized the Brazilian for his environmental policy.

“It is not just about Brazil, we must increasingly investigate the reasons why and by whose action South America is moving to the left”, said Bolsonaro, who in 2019 campaigned for the re-election of the defeated Argentine president Mauricio Macri.

“Our greatest good, freedom, continues to be threatened. In this battle, it is evident that food security for some countries becomes important and there the dominance of the Amazon itself is included as a priority”, said.

The president refloated a thesis from the 70s of the military dictatorship, which indicates that foreign powers seek to conquer the Amazon jungle, of which Brazil owns 60 percent of the territory.

The president faces the largest pasture and forest fires in the Amazon biome in history, reduced the control of logging, illegal occupation of land and defends opening mining in indigenous reserves.

In the message, Bolsonaro also affirmed that the US elections define geopolitical issues for everyone. “In Brazil, especially due to its agricultural potential, we may suffer decisive external interference, in search of an internal policy sympathetic to those powers, looking at the 2022 elections,” he commented on the year of his possible re-election.

Analysts estimate that a Biden victory will weaken Bolsonaro, but at the same time the Brazilian far-right is one of the main allies of Washington against the Venezuelan government of Nicolás Maduro.

Bolsonaro slipped that in the field of information “there is always a strong suspicion of interference by other powers in the final result of the polls”, although he did not detail what those powers or political group would be.

Carlos Bolsonaro, the son of the president of Brazil and councilor of Rio de Janeiro, posted on social media today a post of encouragement to Trump with the word “America”, not to refer to the continent but to the United States, dressed in a military uniform and posing with an automatic rifle, supposedly in the name of freedom to carry weapons heavy.

The United States is Brazil’s second largest trading partner and represents 9% of all volume, behind China, which holds the first place with the dominance of 31.5% of the Brazilian external sales.

These were the details of the news Bolsonaro is confident in Trump’s victory but wondered about the return... for this day. We hope that we have succeeded by giving you the full details and information. To follow all our news, you can subscribe to the alerts system or to one of our different systems to provide you with all that is new.