Killers of journalists in the Arab world have immunity! 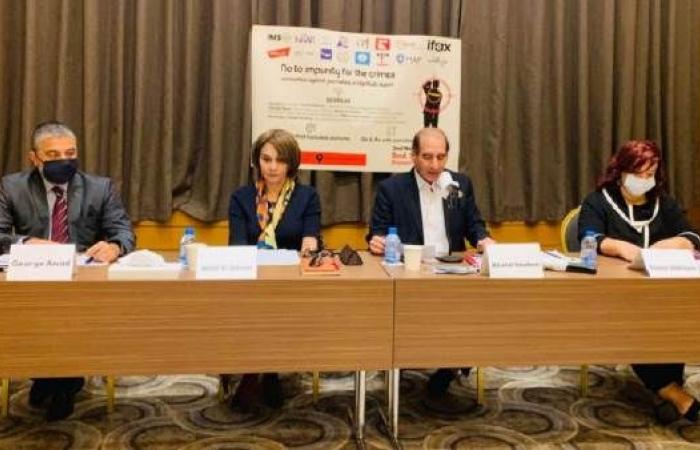 This appreciation came within the activity “No impunity for crimes against journalists in the Arab region” that was held in Beirut today, Monday, on the occasion of the seventh anniversary of the International Day for the Prevention of Impunity for Crimes against Journalists, corresponding to November 2, 2020, which It was approved by the United Nations General Assembly at its sixty-eighth session, held in 2013.

The Executive Director of the Gulf Center for Human Rights, Khaled Ibrahim, presented a general framework for establishing impunity for crimes against journalists in the Arab region. Ibrahim referred to the killing of hundreds of journalists in the region, especially in countries such as Syria, Iraq, Yemen, and Libya, while they were performing their professional journalistic work in order to convey the truth to their citizens. In most of these assassination cases, the killers enjoy complete impunity that prevents them from receiving the punishment they deserve after facing justice.

Ibrahim mentioned other methods of intimidation that journalists are subjected to in our region, including arbitrary arrest, kidnapping, enforced disappearance, torture, threats and extortion, judicial harassment and imprisonment after show trials, and the closure of independent newspapers or preventing them from working.

Ibrahim stressed that he salutes all journalists in the Arab region, and called for work to end immunity, establish accountability and redress for victims, and ensure that the killers face justice. Adding that “journalism is a human right, and without a doubt it is not a crime at all.”

The Executive Director of “Maharat” Foundation, Rola Mikhael, said that our Arab region “is still at the forefront of insecure areas for journalism,” as journalists are only targeted because they may disagree with the de facto forces, whether these forces are statutory or irregular authorities. She emphasized, “The growing phenomenon of impunity in this region constitutes a great threat to freedom of expression and the development of a diverse free press that reflects the plurality of ideas and opinions, the development of an independent press, and the growth of investigative journalism that would help expose violations and corruption.”

According to Mikhael, the International Day to End Impunity for Crimes against Journalists is a global solidarity station every year, to emphasize the importance of securing protection and justice for journalists in order to protect the right to expression and the free flow of information and the public’s right to access and circulate information. This day also constitutes “a station for us also with our partners in the Arab region to confirm that when the threat, intimidation, assault and killing passes with impunity, this leads to more injustice and insecurity, and this constitutes a direct threat to the right of expression.”

The official in charge of communication and information programs at the UNESCO Office in Beirut, George Awad, stated that “access to information and the enjoyment of freedom of expression can only be guaranteed through investigation of crimes against journalists and prosecution of the perpetrators. Truth in the face of power. ”

The President of the Bahrain Center for Human Rights and the President of IFEX, Nidal Al-Salman, focused on the violations committed against journalists in Bahrain. Al-Salman emphasized a set of demands and recommendations of the government of Bahrain in this regard.

The Yemeni journalist, Abeer Badr Yassin, pointed out that in Yemen, “we lack the concept of a military correspondent, and most media institutions do not take into account the safety conditions in sending war correspondents. Therefore, journalists need continuous training to develop their professional skills, as a professional journalist is very little that can be caught.”

These were the details of the news Killers of journalists in the Arab world have immunity! for this day. We hope that we have succeeded by giving you the full details and information. To follow all our news, you can subscribe to the alerts system or to one of our different systems to provide you with all that is new.