Runaway subway saved by whale tail sculpture in the Netherlands –... 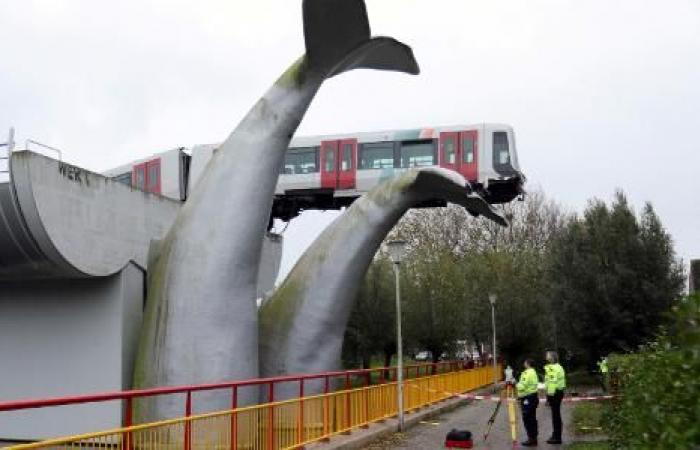 Spijkenisse, Netherlands, 2 Nov 2020 (AFP) – A Dutch subway car was saved on Monday (2) from a serious accident, derailed and was finally stopped, just before falling into the water, by the tail of a whale sculpture .

The train’s driver, who was the only person on board, left the accident unscathed shortly after midnight in Spijkenisse, near the port city of Rotterdam.

The front of the subway remained supported by the sculpture at a height of 10 meters, above the water. Interestingly, the sculpture is called “Saved by the whale’s tail”.

“The subway derailed and ended up at the monument called ‘Saved by the whale’s tail’. Literally, this is what happened,” said Carly Gorter of the Rijnmond Regional Security Authority.

“It’s unbelievable. The driver was saved by the whale’s tail,” he added.

The reasons for the incident are being investigated.

The sculptures of two whales, which submerged in water leave their tail in the air, were built about 20 years ago, in a park located under the subway’s airstrip.

One of them was the one who stopped and saved the subway car and its driver.

These were the details of the news Runaway subway saved by whale tail sculpture in the Netherlands –... for this day. We hope that we have succeeded by giving you the full details and information. To follow all our news, you can subscribe to the alerts system or to one of our different systems to provide you with all that is new.