Double murder in Quebec on Halloween night: what we know about... 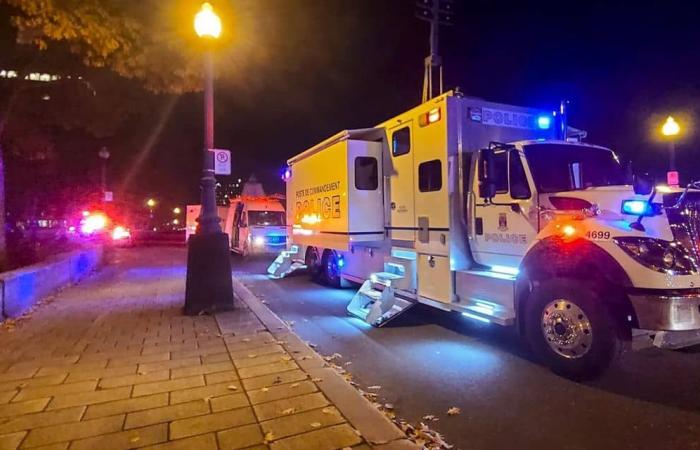 Quebec blamed shock Sunday after a 24-year-old man armed with a Japanese sword and wearing a medieval disguise killed two people and injured five others during Halloween night in the city’s historic center from Quebec, for a reason still unknown.

The man, who suffers from mental disorders according to several media, wanted “to kill as many victims as possible” but was not a priori “associated with a terrorist group”, police said at a press conference on Sunday.

During a brief appearance before a judge by videoconference in the late afternoon, he was notified of charges for two murders and five attempted murders, we learned from his lawyer, Benoît Labrecque.

The suspect, with no criminal record, had premeditated his attack, police said. Armed with a “katana-type” saber, he sowed terror and death in the streets of Old Quebec, seeking his victims in the streets of the city, little frequented due in particular to the coronavirus pandemic which limited Halloween festivities.

He was arrested without resistance after several hours of manhunt.

“Yesterday evening we were plunged into a night of horror when a 24-year-old man, who does not live in Quebec, came to us with the intention of causing as many victims as possible”, explained the Director of the Quebec Police, Robert Pigeon. “Everything suggests that he would have chosen his victims at random”.

The man’s name is Carl Girouard, according to several media, and had no criminal record. A search was carried out on Sunday at his home in Ste-Thérèse near Montreal, according to these sources.

Two French people, settled in Quebec for several years, are among the injured.

The vital prognosis of the five injured is not committed but some have suffered “significant lacerations”, said the boss of the police.

The two people killed were residing in Quebec: François Duchesne, 56, and Suzanne Clermont, 61. The injured are four men aged 19 to 67, and a 24-year-old woman, said police joined by AFP.

“This morning, I learned from a neighbor who knew her that she is one of our close neighbors, someone to whom we say hello every day with a smile,” Anne Pasquier, a neighbor, told AFP by Suzanne Clermont, a hairdresser who lived in the rue des Remparts.

Saturday evening, she “did not have time to cross the street because he arrived at that time and beheaded her,” she added, an information not officially confirmed.

“She was lovely. She had a good sense of humor,” said Jean-Pierre Ajmo, 82, a friend, speaking of “a real shock”.

Sunday afternoon, flowers had been placed and a candle lit in front of his home.

François Duchesne, the other victim, was director of communications and marketing at the National Museum of Fine Arts in Quebec, told AFP Jean Rousseau, city councilor.

The attacks took place late Saturday evening in Old Quebec, especially in the famous Chateau Frontenac district, a tourist hotspot in the capital of the French-speaking Canadian province.

Federal Prime Minister Justin Trudeau has denounced a “terrible tragedy”. “My heart is broken for the relatives of the two people killed in this horrible attack,” he reacted on Sunday.

The mayor of Quebec, Régis Labeaume, denounced a drama “hallucinating, terrifying”, which “is beyond comprehension”, and evoked problems of “mental health” of the suspect.

“This morning, I have the distinct impression of replaying in an old film, a film whose action took place on January 29, 2017 at the Quebec mosque,” he said during the press conference of the police.

That day, a man close to far-right circles, Alexandre Bissonnette, opened fire on the faithful gathered to pray at the Quebec mosque, killing six people and seriously injuring several others. He has since been sentenced to life in prison.

“I feel the need to reiterate that this drama does not call into question the fact that this city is one of the safest in the world, but it is difficult, almost impossible to foresee the consequences of the madness resulting visibly from mental health problems” , he added.

These were the details of the news Double murder in Quebec on Halloween night: what we know about... for this day. We hope that we have succeeded by giving you the full details and information. To follow all our news, you can subscribe to the alerts system or to one of our different systems to provide you with all that is new.