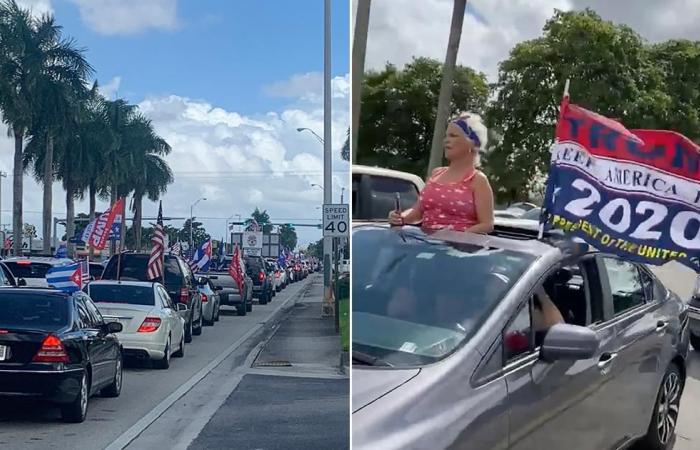 Hundreds of Cubans, Venezuelans and Nicaraguans in Miami held a historic caravan this Sunday in support of the Republican presidential candidate Donald Trump, when the elections are barely 48 hours away.

More than 55,000 cars gathered at 11 a.m. and departed from Tropical Park, in the Palmetto of that city in South Florida, in support of the re-election of the president on November 3.

Trump is the darling of the southern community and has promised continue supporting the desire for freedom of the peoples of Cuba, Nicaragua and Venezuela in a second term.

True to their Latin blood, the streets of Miami sounded salsa, reggaeton and theme of the group Los 3 de La Habana that was included in Trump’s election campaign.

Images of the caravan circulate on social networks, which took place in a festive atmosphere and at the purest Latin rhythm.

“Giant pro-Trump caravan at Tropical Park in Miami”, highlighted one of the publications on the microblogging platform.

Another post claims that Miami showed its love for the country at the hands of Cuban exiles.

South Florida has become the target of the Democratic and Republican campaigns ahead of the elections on November 3 in the United States.

Candidates Donald Trump and Joe Biden agree that winning Florida, which contributes 29 electoral votes, is essential for the election result.

Faced with this reality, the actions of both leaders in the south of the state have intensified.

Trump voted last Saturday in West Palm Beach, and reiterated yesterday in Pennsylvania that it will continue to support the desire for freedom of the peoples of Cuba, Nicaragua and Venezuela.

The current president seems to be the favorite of the Cuban-American community from the south of that state, but Biden does not lose hope of winning the Latino vote in that territory.

In Coconut Creek, the former vice president said last Thursday that Trump is not the right person to promote democracy in Cuba or Venezuela, and that so far his policies have failed to promote real changes in any of those nations governed by dictatorial regimes. .

During an event held at the University of Broward, the Democrat announced that if he wins the elections, he will change his country’s policy towards the island.

Cuba “is no closer to freedom and democracy than four years ago”, he pointed.

Barack Obama He will also return to South Florida on Monday to campaign, in a final attempt to convince the Latino community to vote for Biden.

It is the third time in the last two weeks that Obama travels to the Sunshine State, where on Saturday the Democrat’s running mate also spoke, Kamala Harris, as part of the offensive in Florida.

“If Florida wins, this is over,” Obama said last Saturday, and Biden acknowledged that “Florida holds the key” to the November 3 election result.

These were the details of the news Trump supporters carry out massive caravan in Miami for this day. We hope that we have succeeded by giving you the full details and information. To follow all our news, you can subscribe to the alerts system or to one of our different systems to provide you with all that is new.