Mohammed bin Zayed confirms the rejection of hate speech and the... His Highness Sheikh Mohamed bin Zayed Al Nahyan, Crown Prince of Abu Dhabi and Deputy Supreme Commander of the Armed Forces, and French President Emmanuel Macron, yesterday, during a phone call, discussed bilateral relations within the framework of the strategic partnership, as His Highness affirmed the depth and solidarity of relations, as well as regional and international issues.

His Highness expressed his condemnation of the terrorist attacks in France, and stressed his rejection of the hate speech that harms the relationship between peoples, rejecting his Highness categorically any justification for crime, violence and terrorism.
His Highness indicated that the Messenger Muhammad (may God bless him and grant him peace) represents a great sacredness among Muslims, but linking this issue to violence and its politicization is unacceptable.

Mohammed bin Zayed: The Messenger Muhammad is a great sanctity for Muslims and the politicization of the issue is unacceptable

These were the details of the news Mohammed bin Zayed confirms the rejection of hate speech and the... for this day. We hope that we have succeeded by giving you the full details and information. To follow all our news, you can subscribe to the alerts system or to one of our different systems to provide you with all that is new. 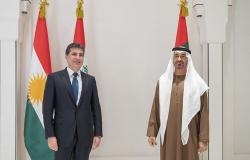