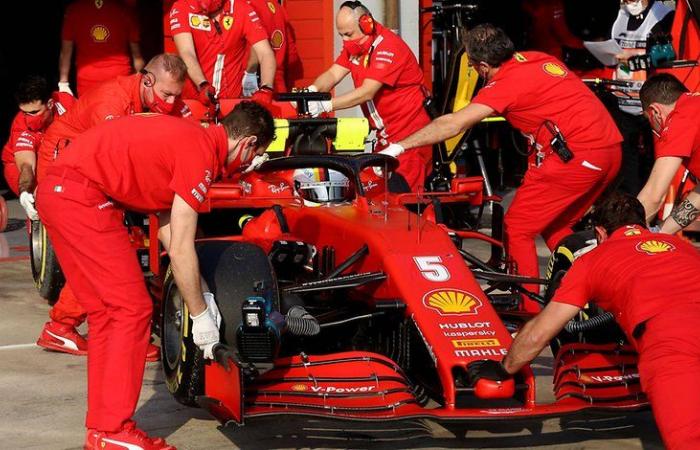 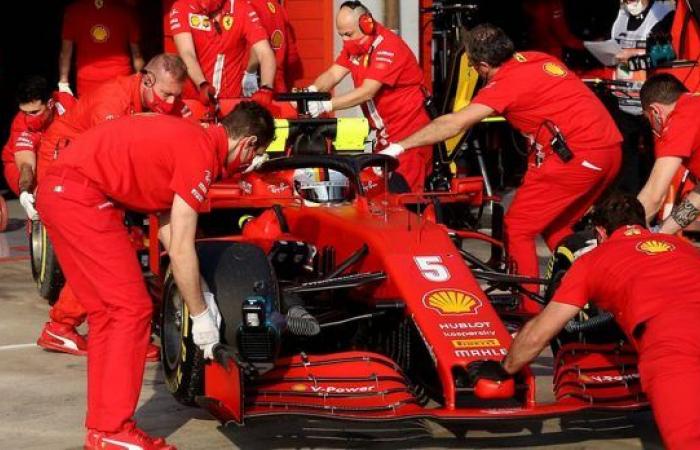 Imola Mamma mia, Ferrari. The Schluderia finally makes Sebastian Vettel (33) a mockery. The dismantled old master fought his way from the embarrassing 14th place on the grid to four in his home race in Imola – and then his pit crew ruined the race for him. Completely failed tire change on lap 40, ten seconds longer than normal, in the end he was twelfth.

The third Italian race of the season was also a debacle for Vettel. After Monza (17th place on the grid, retirement after a brake defect) and Mugello (14th place on the grid, tenth) now the shame of Imola. After the ninth qualifying slap in a row (again half a second slower than Leclerc), Vettel stayed out on medium tires for a long time and was fourth after two thirds of the race. But when changing tires, the impact wrench jammed in the front right. That, of course, fueled the rumors of sabotage again.

Vettel quarreled: “We didn’t have a good stop and I lost a lot of places. It wasn’t meant to be. ”And why did Ferrari put him on hard instead of soft tires? Vettel didn’t understand it either: “I also asked, I wanted the soft tires. But they said we have to take care of Lando Norris. I’d rather have lost a position and attacked again. “

Vettel takes his Schlamper crew under protection – for now

So far, Vettel had taken protection of his crew: “I still have faith in the guys in my garage.” But this red mixture of slower car, lousy tactics, defects and pit mishaps simply cannot be a coincidence.

Vettel only longs for the end of his Ferrari time

No matter how often Ferrari sports director Laurent Mekies (43) can say: “Sebastian and the team around him do not give up looking for solutions that will help him restore his confidence.” That will be in the last four races for Ferrari no longer work, Vettel only longs for the end of the broken marriage and his first day at work for Aston Martin.

Vettel has had nothing to do with the fight for the top since the start of the World Cup. The first victory in the first Grand Prix of Emilia Romagna went to the hungry Lewis Hamilton (35). It was his 93rd Grand Prix victory with which he further expanded his record. And that, although he had lost the pole position to noble helper Valtteri Bottas (31).

You might also be interested in: Not good enough? Mick Schumacjer does not get a cockpit at Alfa Romeo

But the fuck-you Finn was unlucky again, damaged the underbody on the second lap when Lance Strolls (21) Racing Point ran over debris. His Mercedes slowed down in the middle of the race, from then on he had to act as the brake for Max Verstappen (23). As a result, Hamilton took the lead after changing tires on lap 31. Bottas initially even lost second place to Verstappen, which he inherited again after his tire blown on lap 51.

Formula 1: Mercedes wins the seventh title in a row

With the next double victory, Mercedes made the seventh consecutive constructors’ title perfect. Third was Daniel Ricciardo (31) in a Renault. And Ferrari’s home race ended with another embarrassment: The new number one Charles Leclerc (23) was pushed out of fourth by Alpha-Tauri Russian Daniil Kvyat (26). Great success for the ex-Toro Rosso team based in neighboring Faenza, whose spearhead Pierre Gasly (24) had to give up after a sensational fourth place on the grid in the eighth lap due to overheating problems.

*The article has been translated based on the content of Source link by https://www.mopo.de/sport/motorsport/kann-das-noch-zufall-sein–sabotage-geruechte-um-vettel-erhalten-neue–nahrung–37563614
. If there is any problem regarding the content, copyright, please leave a report below the article. We will try to process as quickly as possible to protect the rights of the author. Thank you very much!

These were the details of the news Ferrari debacle: was Sebastian Vettel sabotaged in Imola? for this day. We hope that we have succeeded by giving you the full details and information. To follow all our news, you can subscribe to the alerts system or to one of our different systems to provide you with all that is new.