NASA scientists monitor an “unexpected” particle in the atmosphere of Saturn’s... 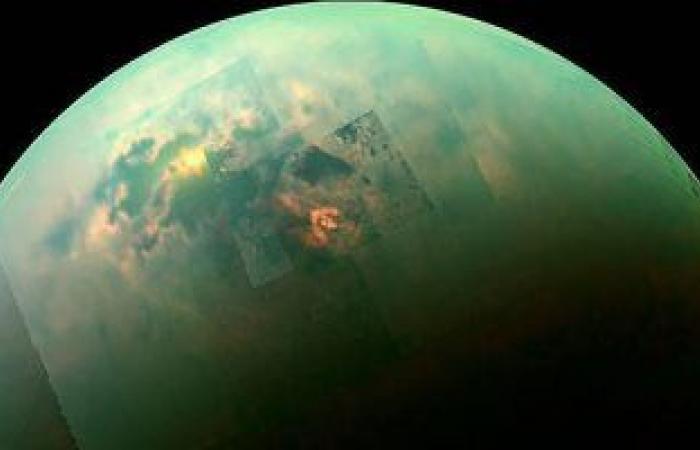 A team of NASA scientists stated that they observed an exceptional molecular giant radio telescope in the atmosphere of Titan is the largest moon of Saturn, And the molecule is called cyclopropenilidine (cyclopropenylidene), ورمزه C3H2And its discovery is important because similar molecules are part of the nucleic bases of nucleic acid and ribonucleic acid, which carry the genetic code for life. But despite the importance of the discovery, the researchers were quick to note that it does not need to be evidence of life on Titan..

In a statement, Connor Nixon, a planetary scientist at NASA’s Goddard Space Flight Center, said: “When I realized that I was looking at cyclopropenylidine, the first thing that occurred to me was,” This is never expected.

This molecule was not discovered before that except in gas clouds between the stellar systems, which are regions that NASA said are empty and cold to an extent that does not allow any important chemical reaction, but Titan’s atmosphere appears full of reactions, and this is what NASA wants to study with an eight helicopter without A pilot called Dragonfly.

Nixon added: “Titan is unique in the solar system, and it has been proven that it has a buried molecular treasure, and its atmosphere is closer to the Earth’s mantle than the rest of the lunar shells in our system. It even has rivers, lakes, and an underground ocean of salty water, but it is not valid for pictures.” Life as we know it, because its nitrogen atmosphere is four times denser than the Earth’s, and its gravity is slightly less than that of the Earth’s moon. “

However, this did not discourage scientists from studying it and searching for life on it, as they considered that its atmosphere contains some methane, which can stimulate many chemical reactions..

Rosalie Lopez, a senior research scientist at NASA’s Jet Propulsion Laboratory, who is an expert on the matter, and if she did not participate in the research, said: “We are trying to find out if Titan is viable for life. To the subterranean ocean, because we think that the suitable conditions for life are in the ocean.“

The moon’s atmosphere still has many mysteries waiting to be revealed, including how cyclopropenilidine interacts with other atmospheric gases..

“We will look in Titan for molecules that are larger than cyclopropenilidine, but we need to know what is happening in the atmosphere, to understand the chemical reactions that make complex organic molecules form and fall to the surface,” said Melissa Trainer, a Goddard astrophysicist who was not involved in the research..“

These were the details of the news NASA scientists monitor an “unexpected” particle in the atmosphere of Saturn’s... for this day. We hope that we have succeeded by giving you the full details and information. To follow all our news, you can subscribe to the alerts system or to one of our different systems to provide you with all that is new.