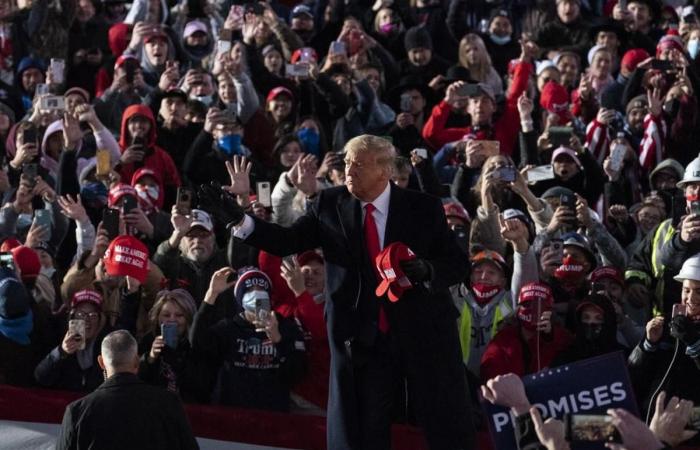 The American president, candidate for his re-election on Tuesday, multiplies the meetings as D-Day approaches.

He connects them at the rate of four a day, these campaign meetings where he is welcomed as a hero; three days before the presidential election, Donald Trump continues to tirelessly galvanize his base, with the hope of creating surprise once again.

The temperature, which gets lower and lower as winter approaches, doesn’t matter. They are there, by the side of the road, on the tarmac of airports, glued to each other, many without masks.

The mechanics are so well established that the first three meetings on Saturday, all in Pennsylvania, were almost exactly the same. So much so that even Fox News, the conservative-line news channel, interrupted the live broadcast in the middle of the third episode.

A fourth was expected in the early evening in Montoursville, still in Pennsylvania, a key state in the presidential race. These supporters, almost all white, come to watch a show they already know. The Head of State lists what he considers to be the many successes of his mandate, by mixing anecdotes, digressions, humor and criticism galore, like a freewheeling radio host.

At times, the third meeting even turned into a stand-up number, with imitations and “punchlines” (jokes that punctuate a comic number). Finally, Donald Trump gratified the delighted spectators with his famous choreography on “YMCA” by Village People, whose singer recently asked him, without success, to no longer use the group’s titles.

Everything is so well settled that the public has become an actor in these “rallies”, and responds to its candidate tit for tat. “Lock him up!” (“Put him in jail”), for a somewhat strong reference to Joe Biden. “Su-per-man!”, When he says he contracted the coronavirus. And, at regular intervals, “We love you!” and “USA!”

How far will “the wave” go?

“They never talk about our crowds,” Donald Trump began taking the microphone in Reading (Pennsylvania) on Saturday afternoon, accusing the media of not restoring the fervor of his supporters. “And they don’t talk about the sleepy Joe + either.” There were 12 people ”at his last campaign meeting.

The fact is that Joe Biden limits the capacity to host his public meetings to respect barrier gestures, with spectators in their vehicles, in drive-in mode, offering a striking contrast to Donald Trump’s meetings.

By multiplying the stages, the Head of State offers himself a series of baths of youth as much as he galvanizes his faithful. “It doesn’t look like someone who is going to finish second, do not you think?” Launched the American president on Saturday to a delighted audience who responded with a clamor.

For the former real estate developer, a “wave” is forming, the most visible signs of which are these campaign meetings, the massive gatherings of boats in his colors, the processions of cars or motorcycles.

The tide of signs planted on the lawns of millions of homes and along the roads also testifies to a field visibility unprecedented in American political history.

If the polls show him beaten with flawless regularity for months, Donald Trump says he only believes in what he sees, this red “wave”, republican color. “In history, there has never been a movement like this,” he hammered back to Butler, where he started his speech more than an hour late. “Tuesday will be a historic day. I feel it.”

These were the details of the news US Presidential – Trump’s meetings, last stand or victorious parade? for this day. We hope that we have succeeded by giving you the full details and information. To follow all our news, you can subscribe to the alerts system or to one of our different systems to provide you with all that is new.