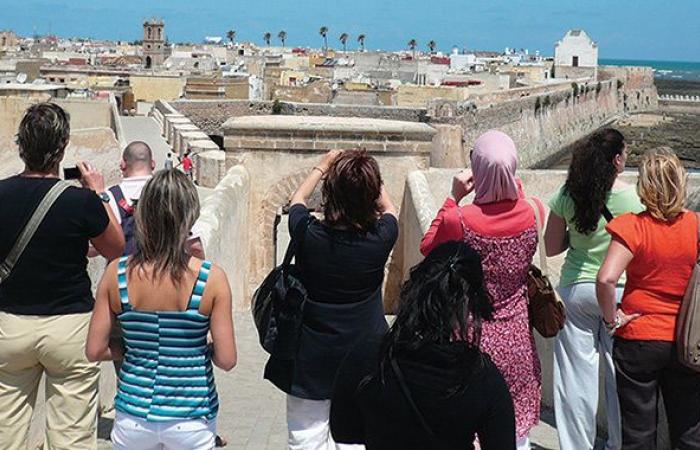 A first group of 74 tourists arrived on Saturday at Essaouira-Mogador international airport from Brussels, Belgium, as part of the sustained efforts made by the Kingdom for a gradual recovery, secure and sustainable tourism activity on a national scale. Thus, after several months of border closures due to the health crisis induced by the spread of Covid-19, this first group of travelers, including Moroccans living abroad, arrived aboard a company plane. low-cost airline “Ryanair”, thus bringing great hopes for professionals and operators of the tourism sector as well as for the competent authorities who spare no effort in order to boost this destination which remains among the most popular as well on the scale international than national. On the occasion of this happy event and this highly symbolic moment, the guests of Essaouira were warmly welcomed by a guard of honor made up in particular of officials of the Cité des Alizés airport and the Provincial Tourism Council of ‘Essaouira (CPTE) as well as professionals of the sector. This ceremony, organized to symbolically celebrate the return of tourists to Essaouira, was punctuated by the distribution of flowers, protective masks and hydroalcoholic gels to all travelers, while wishing them a pleasant stay in the city of Alizés and the Kingdom. In a statement to MAP, the Acting Commander of Essaouira-Mogador International Airport, Mr. Mohammed Arhjoul, expressed his deep joy to see this airport platform welcome, as part of the resumption of its activity, which has since been suspended. last March, this “Ryanair” flight from Brussels with 74 passengers on board, after months of closure dictated by the spread of Covid-19. He said that this happy event is of great importance and is intended to bring enormous hopes to tourism professionals across the province. Mr. Arhjoul also underlined that the passengers were welcomed within the framework of strict compliance with precautionary devices and preventive measures in accordance with the directives of the competent authorities and the health protocol in force, in order to ensure a healthy environment and a secure reception. and reassuring for all travelers and to guarantee their health security. In partnership with the ONMT, the low-cost European airline “Ryanair” recently announced the increase of its frequencies in Morocco, able to support the recovery of the national tourism sector, it is recalled. According to the ONMT, from October 25, 58 weekly flights on 45 lines to France, the United Kingdom, Ireland, Italy, Germany, Belgium, Spain and Portugal were blown. The ONMT has set up a partnership with “Ryanair” so that the company can once again provide flights from the six main European markets and to eight Moroccan airports.

These were the details of the news Gradual revival of tourism: Essaouira welcomes a first group of tourists... for this day. We hope that we have succeeded by giving you the full details and information. To follow all our news, you can subscribe to the alerts system or to one of our different systems to provide you with all that is new.