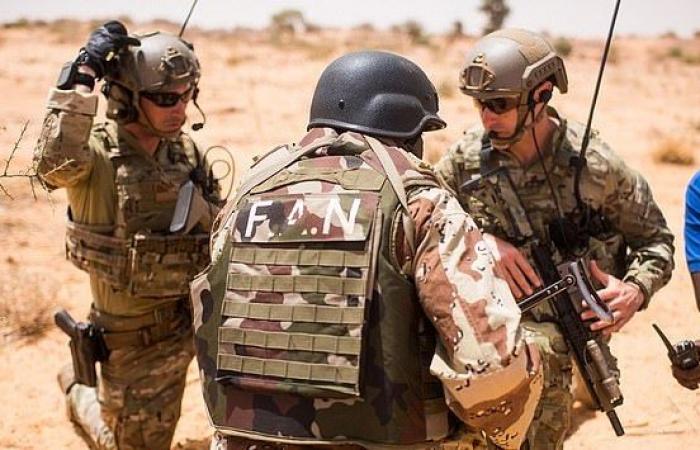 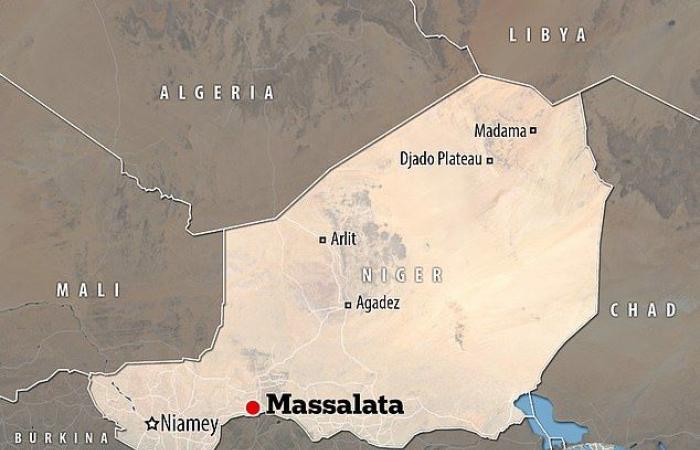 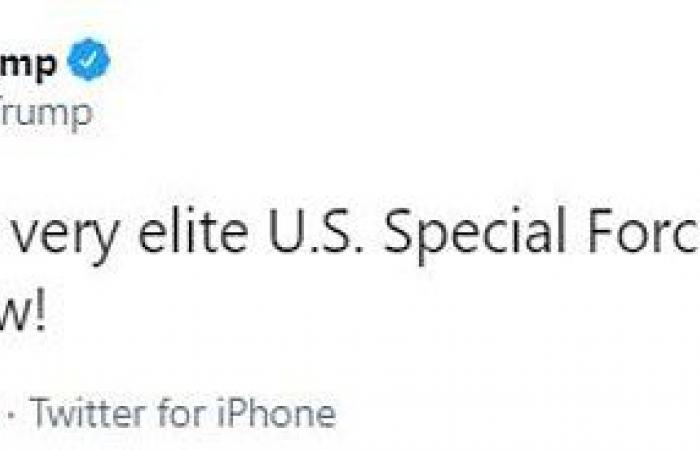 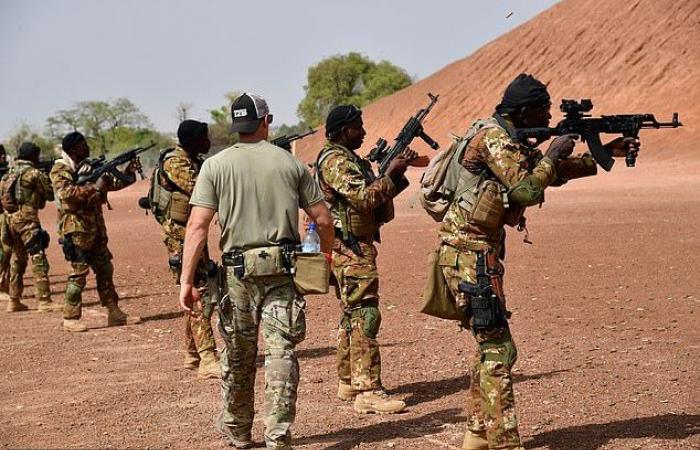 A US citizen kidnapped at gunpoint last week in the West African nation of Niger was rescued from a dramatic US military operation in neighboring Nigeria, the Defense Department has confirmed.

Philip Walton, 27, was picked up from his farm in Massalata, southern Niger, early Tuesday morning by kidnappers armed with AK-47 assault rifles and demanding a $ 1 million ransom from the man’s father.

The Department of Defense confirmed on Saturday that the successful operation was carried out by elite SEAL Team 6 commandos in a daring early morning attack after tracking the kidnappers’ phones.

According to the ABC, all but one of the seven kidnappers were killed in what is termed the “precise” hostage rescue mission.

“They were all dead before they knew what happened,” a source told the network.

President Trump tweeted his praise upon news of the rescue. ‘Big win for our elite US Special Forces today. Details following! , he wrote. 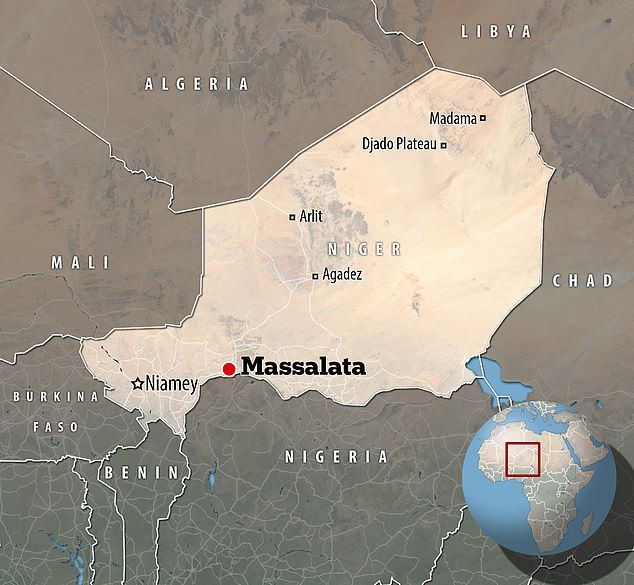 The Defense Department added that the operation did not injure any military personnel and that it was carried out with the help of the Nigerian and Nigerian governments to quickly rescue Walton before he could be moved.

“We had to get him before a possible deal or sale,” a US official told Fox News.

The CIA provided information that led to Walton’s whereabouts while elements of Marine Special Operations in Africa located him.

The New York Times reports that about 30 Navy commands dropped into the remote area where the kidnappers brought Walton early Saturday morning. They hiked about three miles before they came across the kidnapper’s little camp.

An intense but brief shootout ensued, in which a kidnapper escaped.

Walton was not injured and was taken out of the camp to a makeshift landing area, where a US helicopter brought him to safety.

‘This American citizen is safe and is now in the custody of the US State Department. No US military personnel were injured during the operation, “the Department of Defense said in a statement that did not name Walton.

“We will never take an American hostage,” added Secretary of State Mike Pompeo.

“Thanks to the extraordinary courage and skills of our military, the support of our intelligence agents, and our diplomatic efforts, the hostage will be reunited with his family.”

A US official, who was not empowered to publicly discuss the rescue and spoke on condition of anonymity, said there was no solid evidence that Walton’s abduction was related to terrorism and instead “tended towards a ransom abduction “.

Reuters reported that the perpetrators appeared to be of the Fulani ethnic group and spoke Hausa and some English.

However, the official said the US government was concerned that the hostage could be turned over to another terrorist group or that the kidnapping could turn into a prolonged hostage situation.

The US decided to act quickly before it could be taken over or sold to a group of Islamist militants linked to either Al Qaeda or ISIS.

“These types of operations are among the most difficult to perform,” retired CIA officer Mick Mulroy told ABC.

Walton is now back in Niger and is staying at the U.S. ambassador’s residence in Niamey, according to the official, who said no ransom was paid. 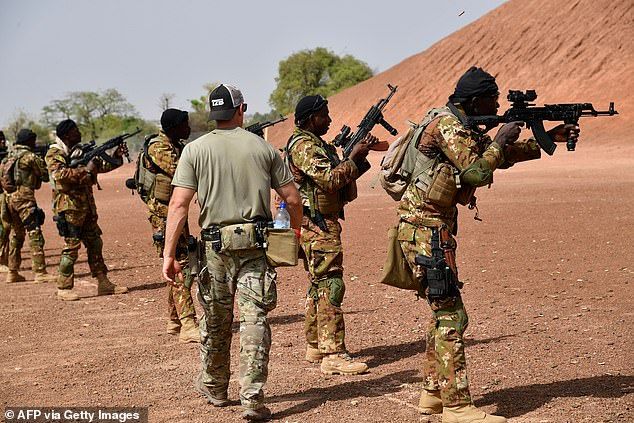 The increasing number of attacks in Niger and other West African countries has come despite the aid of French and US forces. Pictured: A US Army instructor walks next to Malian soldiers during an anti-terrorism exercise in the Kamboinse in 2018 (file photo).

The Nigerian Defense Minister also confirmed the release to AFP.

“I confirm that the American hostage was released last night,” said Minister Issoufou Katambe, without giving details of the circumstances of the release or the whereabouts of the hostage.

Six armed men riding motorcycles armed with AK-47 assault rifles abducted Walton, who has been referred to as the son of a missionary, from his home on the outskirts of a rural village in neighboring southern Niger on October 26.

US and Nigerian officials said the attackers found Walton in his backyard and pressured him to make money. When he offered them only $ 40, it took him by force.

The kidnappers tied the rest of Walton’s family together so they could not inform the authorities, which meant the police did not know that the kidnapping had taken place for about four hours.

Authorities said the armed men left on three motorbikes and took the 27-year-old across the nearby southern border to Nigeria, leaving his wife, young daughter and brother unharmed.

Local officials said the kidnappers called the man’s father, who lives half a mile away, to ask for a ransom, although the family did not confirm it.

According to his father, who has been in Niger himself for almost 30 years, Walton had lived in Massalata with his wife and child for two years.

They raise camels in the countryside and often take them to the surrounding bush.

“They were so exposed that he was kidnapped without anyone knowing,” Prefect Lele told Reuters, saying the man was kidnapped at around 1am on Tuesday morning “in a garden on the outskirts of Massalata.”

Niger lies at the heart of the vast Sahel region which is grappling with a jihadist insurgency that has claimed thousands of lives and displaced hundreds of thousands from their homes.

The country is facing a growing number of attacks from extremists linked to both the Islamic state group and al-Qaeda.

The kidnapping comes two months after ISIS-affiliated militants killed six French aid workers and their Niger leader while visiting a wildlife park east of the capital.

Kidnappings in the region are rare, but not uncommon. At least six foreign hostages are being held by Islamist insurgents in Mali, Burkina Faso and Niger.

Two of them were taken in Niger, including US helper Jeffery Woodke, who had been missing since October 2016, and Jörg Lange, a German helper who was brought from a city near the Malian border in April 2018.

Niger’s President Mahamadou Issoufou said last September that he had information that Woodke was alive and in good health.

Three Europeans, including 75-year-old French NGO worker Sophie Petronin, were released by their kidnappers in Mali earlier this month as part of a prisoner swap arranged by the Malian government.

Islamists have collected millions in ransom payments as a result of kidnappings in recent years. The US government has often criticized other countries for their payment.

President Donald Trump has repeatedly promoted his administration’s focus on the release of American hostages held by militant groups overseas as well as other detainees.

Earlier this month, two Americans held captive in Yemen by Iranian-backed militants were released along with a third person in exchange for the return of around 250 Houthi rebels from Oman.

These were the details of the news The 27-year-old US citizen who was kidnapped in Niger is rescued... for this day. We hope that we have succeeded by giving you the full details and information. To follow all our news, you can subscribe to the alerts system or to one of our different systems to provide you with all that is new.