Metallic asteroid between Mars and Jupiter is estimated to be worth... 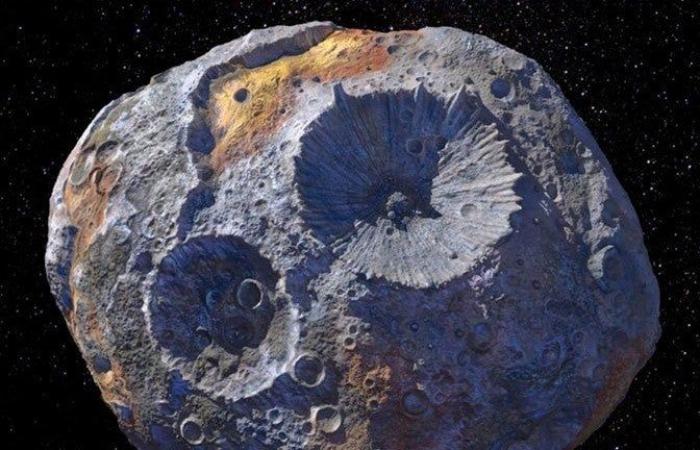 Asteroid 16 Psyche, as it is called, is possibly the remnant of a planetary core that never properly formed into an actual planet. While most asteroids are made of stone or ice, the incredibly dense psyche is mostly metal and about 140 miles in diameter, making it the size of Massachusetts.

The new study by the Planetary Science Journal found that psyche can be made up of iron and nickel, which are typically found in the cores of planets.

“We saw meteorites made mostly of metal, but Psyche might be unique in that it is an asteroid made entirely of iron and nickel,” said lead study author Dr. Tracy Becker in a statement. “The earth has a metal core, a mantle and a crust. It is possible that when a psyche protoplanet was forming, it was hit by another object in our solar system and lost its mantle and crust. “

NASA plans to launch an unmanned spacecraft named Psyche on a SpaceX Falcon Heavy rocket in 2022 to reach the asteroid and study its composition and history. This is the first time NASA has reached a body made entirely of metal. The spaceship will hit the psyche in January 2026.

Back in 2017, researchers told CBS News that they would not use the asteroid’s $ 10,000 trillion metal mass for business gain.

“What makes Psyche and the other asteroids so interesting is that they are seen as the building blocks of the solar system,” said Becker. “It is fascinating to understand what really makes a planet and possibly to see the inside of a planet.” Once we get to Psyche, we will really understand whether this is the case, even if it is not what we expect. Whenever there is a surprise, it is always exciting. “

If you like weird and wild science stories head over to IGN’s science news hub. A rogue planet swimming through the Milky Way was also recently discovered. In addition, scientists discovered that the amusingly named “Black Widow Star” is the source of the gamma rays that give Hulk his superpowers.

Oh, and the moon is wet.

These were the details of the news Metallic asteroid between Mars and Jupiter is estimated to be worth... for this day. We hope that we have succeeded by giving you the full details and information. To follow all our news, you can subscribe to the alerts system or to one of our different systems to provide you with all that is new.