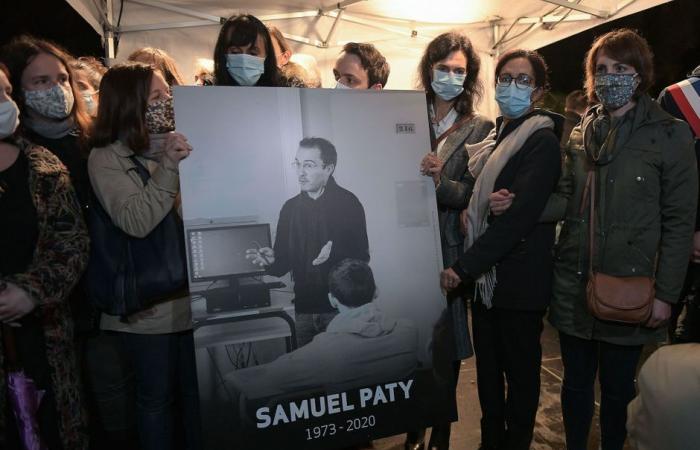 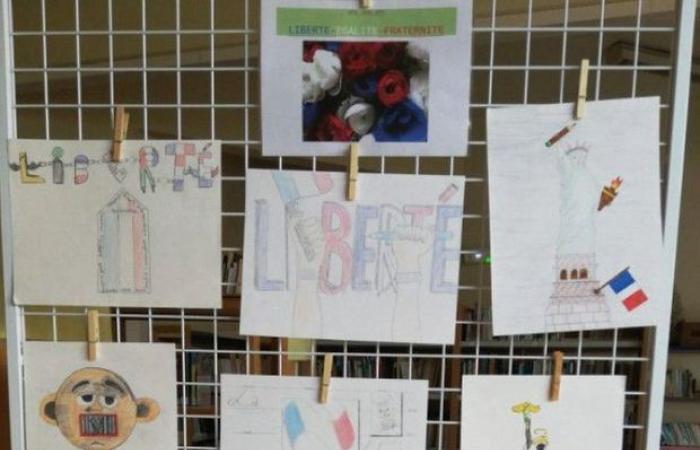 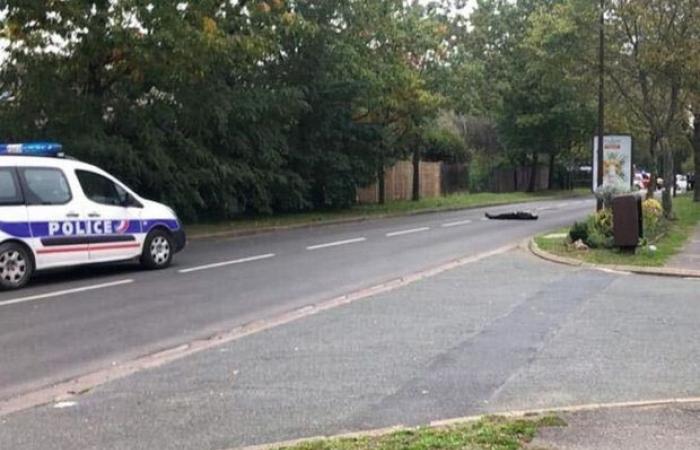 The history-geo teacher from Conflans-Sainte-Honorine has become the 267th victim of a war that does not speak its name. Samuel Paty, who fell for having devoted a course to freedom of expression, will be honored on November 2, the first day of school.

On Friday October 16, Samuel Paty knows he is in danger. In recent days, this teacher, much loved by his students, has lost his usual good nature and walks with his head down, in silence, in the corridors of his college. Samuel Paty has been teaching history and geography there since 2018 with an unusual passion, a consummate art of pedagogy. There are professors we hope to “have” in September. “Monsieur Paty” is one of them.

To return home, to the apartment he shares with his beloved 5-year-old son, on the second floor of a small building nestled in the heart of the residential district of Grillon, in the neighboring town of Eragny-sur-Oise, he changed his ways. He swapped the pretty path that winds through the woods for a less direct path, but asphalted and lined with houses. It’s safer. He also wears a hood so as not to be recognized. The principal of the college did give him a magnetic badge that would allow him to come by car to park in the establishment, but the apartment is ten minutes on foot. Samuel is not afraid of being murdered. He fears a scuffle, slaps, blows.

Since October 6 to be exact – when, as part of a course on freedom of expression, he projected a caricature of Muhammad signed “Charlie Hebdo” into his fourth grade class – rumors and slanders have been swelling about social networks. The Prophet naked, on all fours, a star on the posterior and this comment: “A star is born. He persists in giving this course in order, he hopes, to sharpen the critical spirit of his students, and to teach them to argue, in the purest tradition of the Enlightenment. Caricatures shown only for a moment. Sometimes he changes his drawing: “With us, he projected a caricature of Jesus, and he told Christians they could hide their eyes,” recalls Aminata, a former Muslim student, now in first year. As always, the professor relies on intelligence but takes precautions. Thus, the day before, he warned: “Tomorrow, I am going to show you a drawing likely to shock some of you, of Muslim faith. If you want, you can walk out of the classroom, close your eyes, or look away. A young girl is moved. She screams that she won’t come out. The exchange is heated.

The schoolgirl, excluded for two days, will not participate in the course and will not see the caricature. However, the next day, his father reacted furiously, uploaded a video in which he called the teacher a “thug”, assured that the latter demanded that Muslim children raise their hands and go out into the hallway before showing the image of a naked man presented as the Prophet. “I will not let pass,” he warns. He multiplies vindictive messages on Facebook, files a complaint for “dissemination of pornographic images to a minor”, calls on the Collective against Islamophobia in France (CCIF), the academic inspectorate, the Pantin mosque, denouncing ” this teacher [qui] said braggingly to my daughter that he participated in the “Charlie” walk. You love your Prophet […], you have the name and address of the teacher to say STOP ”.

The young girl appears in a video opposite Abdelhakim Sefrioui, Salafist and anti-Zionist figure of the Cheikh Yassine collective (founder of Hamas), file S. She claims to have been present in the class: “They do not respect us. For them, we are not their equals while we are humans like them. The video, viral, will be seen as far as Algeria. Other parents of Muslim students join the movement; they send their grievances to the principal, who then attempts a conciliation, receives the father of the family with the radical preacher. In vain.

“After the video of the Salafist Abdelhakim Sefrioui, we received a lot of messages, more than ten anonymous phone calls a day, death threats”, confides a source who works at the college. Samuel Paty is targeted, the main one too. The Islamist promises to refer it to the academic inspection. He will maintain that the latter had planned to sanction the professor, although no procedure was ever initiated. Heard by the police as part of the complaint filed against him, Samuel Paty explains himself, then, in an effort of mediation, apologizes to the parents of the students who had said they were shocked. Yet he did not commit any fault. “It was beyond him,” said a friend. He did not understand what was being criticized for him. Shaken, he in turn files a complaint against the young girl’s father for “slanderous denunciation”.

During these ten hellish days when the college hierarchy tried to protect Samuel Paty, the tension did not abate. Most do not realize anything, even if “in the discussions of the playground, some teenagers, who do not know this teacher, treat him as ‘racist’ and ‘Islamophobic'”, says a student. Calumny drinks from ignorance. The atmosphere is electric. On the morning of October 16, at 10:15 am, a plastic arts teacher is challenged in class by a third year student who points to her collar: “You are hiding your cross! He orders. Speechless, the teacher does not dare to answer and is content to drop an hour of glue. The other schoolchildren are stunned by the silence of the paralyzed teacher.

A 12-year-old schoolgirl, who returns home quietly, is arrested by the killer: “Change the sidewalk, that’s better for you!” “

At 3 pm, according to the elements of the investigation, Abdoullakh Anzorov seems to have been dropped off by a friend in front of the college, after a hundred kilometers of road from Evreux, where he lives. He carries two knives in his bag, including a 35 cm butcher’s blade, and an airsoft-type rifle. This 18-year-old Chechen, born in Russia, watches, asks the pupils who say goodbye before the holidays to show him “Mr. Paty”. According to a source close to the anti-terrorism prosecution, he offers 300 euros to those who will help him. He says he wants to “kill” Mr. Paty. Several of them accept the sum. A student will burn the money before the police arrive. He is now in police custody with fourteen other people.

At around 4:30 p.m., the history teacher left school, no doubt happy to be on vacation. But still worried. He asks one of his teacher friends to accompany him. Alas, the teacher, today consumed with guilt, has an obligation. Samuel Paty, a slim 47-year-old man, a tennis and badminton lover, walks alone towards his destiny. Behind him, Anzorov. When you get to the end of rue du Bois-d’Aulne, the teacher turns left and then immediately right, rue du Buisson-Moineau. A 12-year-old schoolgirl, who returns home quietly, is arrested by the killer: “Change the sidewalk, that’s better for you!” »Impressed, the girl scampers off.

He was a gentle man, a humanist

The rest is the bloody chronicle of ordinary Islamist barbarism. This terrorist barely out of adolescence believed he was suppressing a “hell dog”. He savagely murdered a very discreet, humble, measured, tolerant, open to the world, funny and cherished hero by his students. You had to see them the day after the crime, gathered to keep warm in front of the college, thrown in spite of themselves into this icy abomination. The budding Islamist would have had to listen to these teenagers barely younger than him, like Gina, 14, in third: “Mr. Paty was so kind, so helpful, attentive. “Let him see the red eyes of Carmin and Arthur, 15 years old:” He was a teacher thoroughly into his work, he really wanted to share his passion for history with us. “From them, he would have discovered that the slaughtered man was full of humor, that he had a book of jokes,” all of them sucker than the others and that’s what made us laugh ” , Layza recalls: “I prefer to think about it again. I was rowdy, so he kicked me out a few times but I don’t blame him, because he was fair. Thanks to him, I know World War II very well. “

Fair, kind: the words that come up most often. Samuel Paty was born on September 18, 1973 in an inn in the Allier, in Moulins, where his parents still reside. Only son, he loved medieval history, was gifted for drawing and adored travel, “Star Wars”, music, in particular the group Sigur Ros or Goran Bregovic, which he had gone to see in concert with his companion and the mother of his son, from whom he was recently separated. With his public writer friend, he shared the same passion for poetry: “We contacted each other to see exhibitions together, museums, visit castles. »After the Lumière Lyon 2 University, then at the IUFM in Lyon, Samuel obtained his Capes of History-Geography in 1997 and went to the Paris region. A teacher from SVT, who knew him in Torcy, in Seine-et-Marne, is stunned: “He was a gentle man, a humanist. And even though he’d have been a dirty jerk, he didn’t deserve that. I think about the last week he lived, the fear and the sense of abandonment he must have felt, and his family, of his integrity to the end. “

It is my generation which inaugurated this college in 1986. We are in a movie, a nightmare, we are going to wake up

300 meters from the college where President Emmanuel Macron received the police who had shot the killer, three men wandered with empty eyes, arms dangling, in front of the teacher’s body, protected by a white tarpaulin stretched by the forensic police . Kenzo, who was the first to discover the lifeless body, and his friend Maxime could not get home: “I gave them the Scotch to stick the tarpaulin”, Maxime repeated, in a state of shock. Marc L., 46, a resident of the street, was also stunned: “It is my generation which inaugurated this college in 1986. We are in a film, a nightmare, we are going to wake up. “

These were the details of the news Samuel Paty, martyr of the Republic for this day. We hope that we have succeeded by giving you the full details and information. To follow all our news, you can subscribe to the alerts system or to one of our different systems to provide you with all that is new.