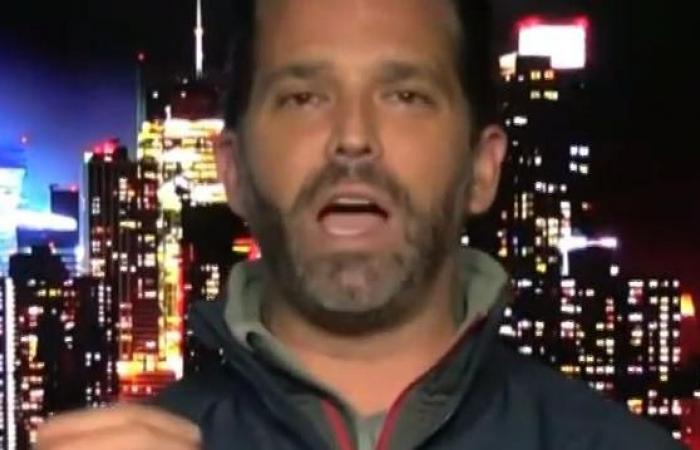 President Donald Trump has claimed coronavirus deaths in the US are “way below” while his son Donald Jr. says deaths are now “next to nothing”.

None of the claims are true.

I’m going to give you the facts here first and then examine the Trump claims.

The US reported 88,521 confirmed new infections yesterday, according to Johns Hopkins University. This is the highest daily total since the pandemic began.

A further 971 deaths were recorded, which is roughly the daily average for the past few weeks.

The US is currently killing an average of more people per day than Australia during the entire pandemic.

There are currently more than 40,000 Americans in the hospital and there are fears that the death rate will soon rise as deaths are known to be several weeks behind cases.

These diagrams from the COVID tracking project show you the trajectory of the virus.

RELATED: Trump railed over coronavirus coverage in the media

Donald Jr. appeared on Fox News last night where he was interviewed by Laura Ingraham.

She asked the president’s son to respond to comments from CNN’s chief medical commentator, Dr. Sanjay Gupta, who reported yesterday that 82 percent of Mr Trump’s campaign events were followed by an increase in infections in the region.

Each rally attracts thousands of the President’s supporters who are in close proximity to one another without any social distance. The vast majority of participants do not wear face masks.

“You are putting yourself at risk.”

He advised anyone who had already attended a Mr Trump rally to assume they had been exposed to the virus and self-quarantine for 14 days.

“You go home to your family, to your friends. They can infect community members. If you go to such an event now with the amount of virus that is spreading in this country, you have to assume that you have been exposed in some way, ”said Dr. Gupta.

Donald Jr. didn’t think much of this advice.

“These people are really idiots. You know what I mean? ”He told Ingraham.

“I like the way you follow up Scott Atlas because he’s not an epidemiologist, but Sanjay Gupta magically is now. I mean, give me a break. ”

Dr. Gupta is a neurosurgeon and has worked in medical journalism since 2003.

Dr. Scott Atlas, a neuroradiologist, is a controversial member of the White House’s coronavirus task force. He has questioned the effectiveness of face masks and advocated a herd immunity strategy that is alarming other experts on the task force.

Such a strategy would involve spreading the virus to most parts of the community while trying to protect the most vulnerable such as the elderly.

“I mean, the reality is this. If you look – I posted it on my Instagram a few days ago because I was looking through the CDC data, because I kept hearing about new infections. But I thought, why don’t they talk about deaths? “Donald Jr. continued.

“Oh, because the number is almost nothing, because we’ve got control of this thing. We understand how it works. We have the therapeutics. If you look at this, check out my Instagram, it’s almost nothing left. ”

“Why are the CDC’s actual data not discussed? Why is the media just talking more about cases that are rising (because we are testing) but the real numbers that matter, namely the death rate, are way down? “The President’s son wrote.

“I think they cannot rule you with fear if they tell you the truth.”

The graphs Donald Jr. shared were actually based on data from the Centers for Disease Control and Prevention.

He neglected to mention or may not notice several warnings on the CDC website that the recent death data is incomplete as unlike other organizations, they have to wait for the formal death certificates to be completed and processed. This can sometimes take months.

“The data during this period is incomplete due to a delay between the time of death and the completion of the death certificate which was presented to NCHS and processed for reporting purposes.

“This delay can range from a week to eight weeks or more, depending on the jurisdiction and cause of death.”

The result is that CDC data always shows that the death rate has dropped sharply in the past few weeks and has been throughout the pandemic. It is an illusion.

President Trump this morning confirmed his son’s false claims on Twitter, saying deaths from the virus were “way down”.

Meanwhile, Trump’s critics online have beaten her up for spreading misinformation.

“Don Jr is an idiot”

News flash—Don Jr is an idiot. Okay not really news — but bastardizing mortality statistics that have a well known lag is just so on brand for him. #COVID19 https://t.co/fh9nwx0Dg8

“Bastardizing mortality statistics with a known delay is just right for him.”

Donald Jr’s comments sparked an angry response on MSNBC today. The network’s host, Kasie Hunt, played it early that morning after returning from a commercial break on her program Way too early.

“That was Donald Trump Jr., falsely claiming the death toll fell to next to nothing on the same day the US recorded one of the highest coronavirus deaths since the pandemic began,” Hunt said.

Dr. Vin Gupta, lung specialist and intensive care doctor, was also devastating. He cited a dire forecast from the Institute of Health Metrics and Assessment.

“My institute was actually right with its models, unfortunately for the country.”

With approximately 1,000 dying in the U.S. daily, the president's son just claimed that Covid-19 deaths are down to "almost nothing."@VinGuptaMD has some thoughts about that.

“We expect up to 2300 deaths per day by the turn of the year. We expect, and this applies to me as an ICU doctor, that 18 states will show extreme stress when it comes to their ICU skills.

These were the details of the news Donald Trump Jr. Claims Coronavirus Deaths “Almost Nothing” for this day. We hope that we have succeeded by giving you the full details and information. To follow all our news, you can subscribe to the alerts system or to one of our different systems to provide you with all that is new.