The lining is still in my house .. Rania Youssef and... 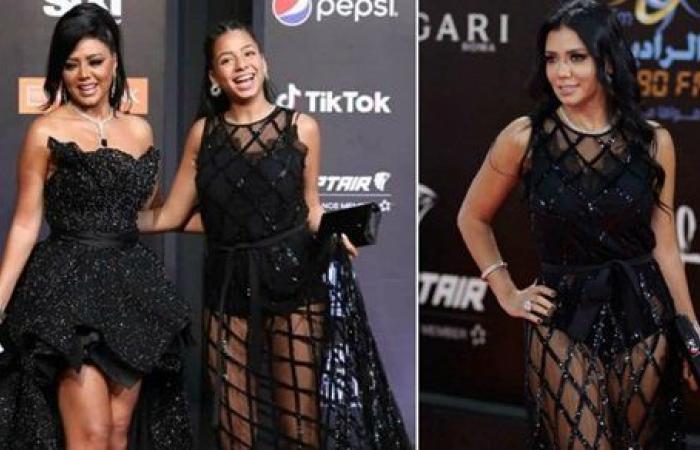 In high caliber surprise, she appeared The artist Rania Youssef, With her daughter on the red carpet, during the closing ceremony of the El Gouna International Film Festival, and the daughter wears the famous mother’s dress (without lining).
And surprised Raniya YousifAttending the closing ceremony of El Gouna Film Festival, with the appearance of her daughter in the dress that caused a sensation at her time, which is famous for the dress lining, which “Rania” wore at the previous session of the Cairo International Film Festival.

The story of Rania Youssef lining

The crisis of the lining dress, by Rania Youssef, to The closing ceremony of the Cairo Festival in 2018, when she wore a transparent black dress that exposed her legs completely, which made some attack and prosecute her, but she justified this in a televised statement, saying that the lining of the dress had fallen from her during the ceremony, and she did not know that until after she was photographed.

Rania Youssef said, after this crisis:My son’s life is what I mean, and I am like your daughter, forgive me. ”To respond with these words to the anger of the masses and citizens; For not being compatible with the values ​​of Egyptian society.

Regarding the reason for her purchase of the exciting dress that angered the Egyptians during the end of the Cairo film events, Rania said: “I was in an Arab country and bought the dress and my family and my children loved it. And when I was in the festival, the lining rose and what happened happened.” It was worn during the festival.

She explained that she was surprised on the second day of the festival’s end, after her brother called to tell her that she was talking about social media, because of her appearance in one of the nude pictures, saying: “I was surprised as people dressed, and no one said something, and we are in the festival.”

In response to a question: Is her appearance in this scene to gain media coverage, Rania Youssef commented that she is not one of those who seek to attract the media compass around her in the wrong ways, saying: “I am my longevity in the light and there is no need to hide it from people, and then I am making successful films and series, not I need to do this for fame. ”

She also expressed her great surprise that a lawyer had filed a lawsuit against her, saying: “I do not know why all these cases were talking to me while I was telling the truth.”

She explained that her children are subjected to severe criticism in schools after the occurrence of this crisis, commenting: “My children are bothering every day and are afraid of being arrested for me.”

In her latest statements, Rania Youssef sent a message to her audience, saying: “I am long in the light and there is no need to hide it, and if I need something that was issued from me without intending to forgive me, and I didn’t mean my intention, and I built his Adam, and in the end I dreamed and took my mind after that and I I chose to wear it, and try the dress before participating in any festival, and I will leave Bali from the linen. ”

These were the details of the news The lining is still in my house .. Rania Youssef and... for this day. We hope that we have succeeded by giving you the full details and information. To follow all our news, you can subscribe to the alerts system or to one of our different systems to provide you with all that is new.