Trump and China are forcing Australia to secure its defenses closer... 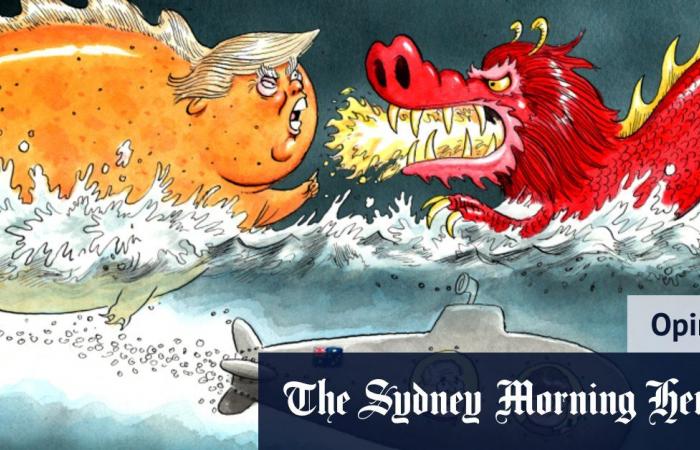 Defense Secretary Linda Reynolds prefers to call Australia’s new strategy “an expanded Plan A”. Australia has had relationships with a large number of countries in the Asia-Pacific region for decades, she emphasizes. So this is not new. But “we are strengthening them in a new way”.

“We are shaping the region in favor of respect for sovereignty and the rule-based order – it is the most consistent realignment since the Second World War,” she tells me. “We are actively and resolutely committed to stability in the region.”

The plan is to put together what I previously described as a group of other MPs and like-minded nations who want to keep the peace. Paul Keating said to him: “Good luck with that.”

Linda Reynolds, a Senator for Western Australia and a former brigadier in the Australian Army Reserve, tries anyway. She is alone, at the moment in isolation at her home in Canberra, with ACT police knocking on the door daily to ensure this as a direct result. She works from home on secure defense communications, but has completed an extensive travel program to the region’s capitals despite COVID-19.

She was in Tokyo last week and gave Japan’s new defense minister, Chinese hawk Nobuo Kishi, an akubra hat. He happens to be the brother of former Prime Minister Shinzo Abe and the grandson of the Japanese Prime Minister who sacrificed his career in 1960 to ram the post-war Japanese-American alliance through the Japanese parliament, Nobusuke Kishi.

The Australian was the first match he’d met from a country since taking office last month. As a keen fisherman, his Akubra is his new fishing hat. He’s also “very interested” in building the relationship, Reynolds says. The two countries have already carried out seven joint maritime operations this year.

And now Reynolds and Kishi have started talks so that the two countries can protect each other’s forces in the event of an attack. So far Japan has such an agreement with only one nation, the USA. Japan is also working with Australia on air-to-air refueling of each other’s air forces and collaborative research on cyberwar and space.

And Reynolds met the Sultan of Brunei at his palace last week. What do you give the monarch who has everything, including his own land? A pair of signed RM Williams boots as it happens. And a submarine. The Australian HMAS Dechaineaux was the first submarine from a country to visit the tiny sultanate when it called that year. Located in the South China Sea, Brunei is a rival to some of China’s territorial claims on this hotly contested waterway.

Reynolds used the same trip to visit the Philippines, where support from the Australian Armed Forces was critical in ending the five-month Islamist takeover of Marawi city in 2017. Since then, the ADF has trained a total of 10,600 Filipino soldiers in counter-terrorism.

“We both have a problem with the return of foreign fighters,” says Reynolds, Daesh or ISIS militiamen who are fleeing their collapsed self-proclaimed caliphate in Iraq and Syria. “Daesh is still an active threat in the Philippines, Malaysia and Indonesia.”

That same week Reynolds was in Singapore to meet Prime Minister Lee Hsien Loong, among others, and to celebrate the 30th anniversary of military training in Singapore, Australia. When they met, a squadron of Singaporean fighter jets was training in the Northern Territory, and HMAS Adelaide certified Singaporean crews of Chinook heavy-lift helicopters to land on the ship deck.

Two Singaporean chinooks were welcomed to Victoria during the January bushfires and flew to remote areas to evacuate people trapped by the flame. “Some cockies said they had no contact with anyone and they burst into tears when they heard the rotors,” says Reynolds.

In the 18 months she was on the job, Reynolds visited 21 countries, received six colleagues and held 41 bilateral meetings on Videolink. She prefers physical contact because she has not found a replacement. Also, “I can’t ask my people to do what I’m not ready to do.”

During the pandemic, the ADF was in use with an average of 20 ships at the same time. “The number of on-board transmissions of COVID is zero,” Reynolds says. In the US, aircraft carriers were temporarily out of service with mass COVID-19 outbreaks.

The defense employed an average of 2,300 people overseas. Reynolds reports that of a total of 99,800 uniformed and civilian workforce, only 95 have been registered with COVID-19 – 92 of them have recovered.

The ADF has turned a liability into an asset and has also been busy assisting the military of other countries through the pandemic. These include smaller Pacific states – Papua New Guinea, Vanuatu, Fiji, Timor-Leste, the Solomon Islands – as well as larger countries in the region. Australia has provided personal protective equipment for the Indonesian military, medical machines for the Philippines and an online COVID-19 training course in half a dozen languages ​​in 68 countries.

However, the biggest news during Reynolds’ last round of defense diplomacy came from a country she hadn’t visited – India. Australia had sought an invitation to India’s annual maritime exercise, Operation Malabar. The US and Japan are regulars, but Australia had been banned for the past 13 years. Until now.

The times of India reported the news: “India is stepping up action against China and inviting Australia to join the Malabar exercise.” What had changed? China’s behavior. Beijing pushed against Indian forces on their disputed border in the Himalayan Mountains, killing 20 Indian troops.

Reynolds describes New Delhi’s invitation to Canberra to send the Navy as “a very important development for us.” The Quad is an emerging group of four Indo-Pacific democracies – the US, Japan, India, and Australia – that only had their second foreign ministers meeting this month. Beijing has railed against the concept of the quad for many years, complaining that it is an Asian NATO targeting China, but predicts it will “disappear like ocean foam”. Instead, it has started to take shape.

“The previous quad was formally very much geared towards foreign ministers,” says Reynolds. India’s invitation to Australia to join Malabar “really extends it to the defense realm”.

Reynolds points out that the Indo-Pacific is increasingly the great theater of global competition when the US and China face each other. “By 2030, more than half of the world’s submarines, more than 300, will be in the region.”

Unfortunately, six of them at most will be Australians and possibly fewer. Of the 12 new submarines Canberra has ordered, the first is expected to be delivered in 2032 and operational by 2034.

Australia’s six aging Collins-class submarines may not be operational by then. “There is a serious risk of a void opening in the 2030s,” says Hugh White, “which means we may not have boats in the water.” It’s one of the cruelly horrific things about big acquisitions. ”

And the seventh of the new Attack-class submarines, which would add a net increase to Australia’s existing fleet of six Collins, isn’t due until the 2040s.

White is skeptical that Australia’s Plan B – or its expanded Plan A, as the Defense Secretary prefers – can function as a credible military strategy to prevent Beijing’s domineering behavior. Especially when Australia’s own armed forces are inadequate.

“In the world of power politics, it depends a lot on how much help the ally can expect from an ally,” White writes Australian Foreign Affairs.

Peter Jennings of the Australian Strategic Policy Institute is equally unfazed by the pledge on the subs acquisition. In the absence of US leadership, however, there is a regional reaction against Chinese aggression: “Asian countries that have the resources to fight back against China will do so – I think it is now happening organically. The trend is indeed towards a group of like-minded countries coming together. ”

Australian activism is an indispensable element of its own defense. Australian planning and building skills would be even better. Happiness cannot break a naval embargo; Hope does not intercept incoming missiles.

Regardless of which candidate wins the US elections next week, Australia cannot revert to its long stance of learned helplessness.

Peter Hartcher is the political editor and international editor of The Sydney Morning Herald and The Age.

These were the details of the news Trump and China are forcing Australia to secure its defenses closer... for this day. We hope that we have succeeded by giving you the full details and information. To follow all our news, you can subscribe to the alerts system or to one of our different systems to provide you with all that is new.