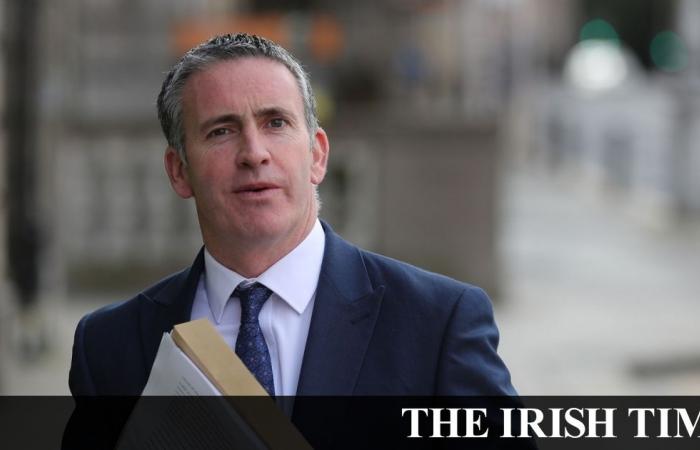 Retail junior minister Damien English has been criticized for insisting that children’s clothing is not an essential item according to criteria set by the government.

When asked by RTÉ’s Prime Time presenter Miriam O’Callaghan on Thursday evening why it was possible “to buy a bottle of wine but not socks for my son”, Mr. English said: “Socks get under clothing [AND]Clothing is not essential. “

To these comments, Socialist TD Gary Gannon replied that he believed clothing was an essential item, pointing out that supermarkets could sell clothing in addition to groceries and other essentials during the first lockdown in March, April and May.

This practice has now ended as retailers were asked to follow the definition of “essential items” more closely, which resulted in parts of supermarkets displaying toys, clothing and housewares being cordoned off.

“In terms of how we make it fair, we have to make it meaningful. I think closing certain aisles in supermarkets where you can buy socks and t-shirts doesn’t make sense to close them. “

He said stores have the “ability to ventilate and use social distancing methods.” This is not the case in every store, but in the large outlets that should be able to. “

“If children’s clothing were not considered essential, the government would cut the zero percent VAT rate,” said Mary Clary. “I know it’s only six weeks, but kids tend to grow quickly, sticking their knees through things and losing coats / sweaters / shoes at an alarming rate,” she added.

Meanwhile, Sharon Leavy said that her children “go through pants like you won’t believe it. Yes, I can order online, but it takes a week and I’m happy to have a card and good WiFi for it. Many don’t. On which planet are clothes not essential? “

Jeanne Dowling repeated similar concerns. “My two-year-old’s shoes got too small in the last lockdown,” she said. “I couldn’t buy online because she has an extremely wide foot with a high instep. I’m usually lucky enough to have a couple or two in the entire store that suit her. Now it looks like she’ll be crushed into these by December. “

On Wednesday, Mr. English hosted a conference call with retailers and representative groups to discuss how the sector can function between now and early December if the current Level 5 rules are to be relaxed.

One person at the meeting told the Irish Times that Mr English had taken a similarly firm line when asked by a representative from Dunnes Stores for more clarity on what was considered material and not material. They were told that no further clarification was required as all information was already publicly available.

Most major retailers across the state have been remodeling stores and banning products that are considered negligible while the country is under level 5 restrictions.

Last weekend, Tánaiste and Enterprise Minister Leo Varadkar said the sale of non-essential items next to essential goods was “unlawful” and urged retailers to “comply with the regulations and … uphold the spirit of the regulations”.

He said mixed retailers need to segregate their inventory and “only sell the essentials,” citing the example of a supermarket where food and clothing are available and the latter section should be cordoned off.

On Saturday and Sunday, gardaí stepped up surveillance of retail space, despite a spokesman refusing to say how many stores had been visited or what would have been done if action had been taken against those found to be violating the rules.

Tesco said it had “followed government guidelines and closed our clothing, home entertainment and toy F&F units across the country prior to enforcement measures on Lake Garda. We will continue to offer a very limited selection of essential clothing items for customers only, such as school clothes and some baby clothes. “

A Boots spokeswoman said it was an essential service to continue trading. “We attach great importance to the sale of important items in our branches. However, if a customer wants to buy additional products in a different area of ​​the store, they can do so. “

These were the details of the news Damien English Defends Retail Restraints | DE24 News for this day. We hope that we have succeeded by giving you the full details and information. To follow all our news, you can subscribe to the alerts system or to one of our different systems to provide you with all that is new.