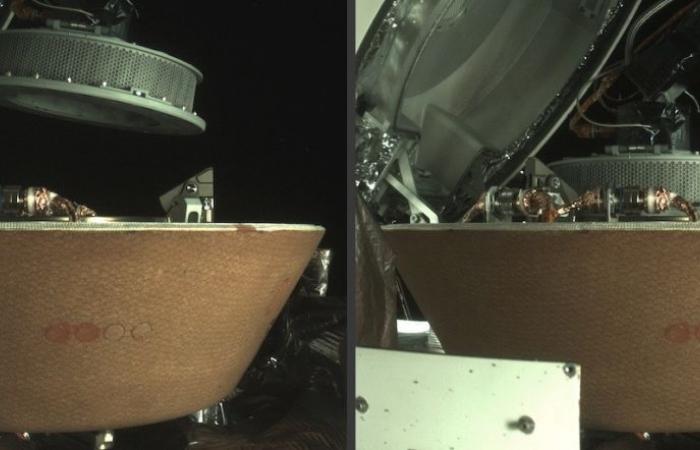 OSIRIS-REx has completed the stowage of the parts of the carbon-rich asteroid Bennu that it captured last Tuesday (October 20) and successfully sealed the material in the spacecraft’s return capsule, mission team members announced on Thursday (October 29) .

And the sample appears to be sizeable – far heavier than the 60 grams that the mission was targeting, team members said. In fact, on October 20th, OSIRIS-REx collected so much material that its sampling head could not close properly. The mylar valve of the head was pinched in places by protruding Bennu pebbles.

The OSIRIS-REx team discovered this problem last week while examining photos of the head and its collected sample. Flakes of escaped asteroid material drifted through the frames. To minimize the loss, the team decided to speed up the precise and complex stowage process that was due to take place next week.

Within 36 hours on Tuesday and Wednesday (October 27 and 28), the engineers instructed OSIRIS-REx to put the sampling head, which was at the end of the probe’s robotic arm, into the return capsule. Pull on the head to make sure it is securely attached. Disconnect connections with the robot arm; and lock the recirculation capsule by locking two latches.

This all happened while OSIRIS-REx was approximately 330 million kilometers from Earth, which meant it took each command 18.5 minutes to reach OSIRIS-REx and another 18.5 minutes for each update from the probe earth was restored.

“We just wanted to try tucking away once, and we wanted to make sure we were successful,” said Sandra Freund, operations manager for OSIRIS-REx, of Lockheed Martin Space in Littleton, Colorado, during a NASA press conference Thursday. “And we definitely were.”

The change in plans required a short-term reallocation of time on NASA’s Deep Space Network (DSN), the system of radio telescopes that the agency uses to communicate with its distant probes. Because the jam operation was so important and complicated, OSIRIS-REx needed a large block of continuous DSN time that other NASA missions sacrificed for the common good.

It is unclear how much asteroid material is now in the return capsule of OSIRIS-REx, which will come to Earth in September 2023. The team canceled a planned post-sampling weighing procedure that would have rotated the probe as this maneuver would have resulted in more sample loss. (Moving the arm – for example, to photograph the sample and carry out the stowage process – accelerated the grain-releasing process, explained the members of the mission team. Therefore, they wanted to minimize such movements.)

But there is definitely a lot of asteroid material on board, said Head of Mission Dante Lauretta of the University of Arizona.

The October 20th sampling went very well, Lauretta said, and the head went deep into Bennu’s surface – maybe 18 inches or more. The team is confident that OSIRIS-REx pretty much filled its sampling head that day, meaning it probably pulled back from Bennu by about 4.4 pounds. (2 kg) collected material.

The losses in the following days appear to be minimal in comparison – probably a total of “ten grams,” said Lauretta. And recent photos of the sampling head showed that it was still wrapped. Mission team members could only see 17% of the head volume in these photos, but they estimate that about 400 grams of Bennu material is trapped in this room, Lauretta said.

Connected: The greatest asteroid encounters ever!

If this estimate is accurate, and if the 17% disc is representative of the entire sampling head, OSIRIS-REx may have held more than 4.4 lbs. (2 kg) sample. Lauretta’s overall prediction is more measured, but it’s still decidedly bullish.

“I think we still have hundreds of grams of material in the sample collection head – probably a little over a kilogram,” Lauretta said during today’s press conference.

That would be great news. Such a large amount would allow many research groups to study the Bennu dirt and rock and conduct a variety of experiments on the pristine cosmic sample. As an example, Lauretta pointed to organic chemistry – especially to analyzes with sugars.

Sugar is expected to be present in very small amounts [on asteroids like Bennu]Lauretta said this would not be doable with the 15 gram allocation, but with the greater mass available for analysis.

If all goes according to plan, such experiments will reveal much about the beginnings of the solar system and the role asteroids like Bennu may have played in helping life on Earth by providing plenty of water and carbonaceous organic chemicals. The main objective of the US $ 800 million OSIRIS-REx mission, which started in September 2016 and arrived in Bennu in December 2018, is to shed light on such big questions.

The next big steps of the mission are preparing for the return voyage (although the engineers are also trying to see if they can somehow get a rough mass estimate of the sample now stowed). The orbital dynamics dictate that OSIRIS-REx has to go home between the beginning of March and May. The current plan is to target the earliest part of this window, team members said today.

OSIRIS-REx is NASA’s first asteroid sampling mission, but not the first in history. Japan’s Hayabusa mission delivered small fragments of the stony asteroid Itokawa to Earth in 2010. The successor to this probe, Hayabusa2, is due to return a sample of the carbon-rich asteroid Ryugu next December.

These were the details of the news NASA’s asteroid probe is stowing a space rock sample for return... for this day. We hope that we have succeeded by giving you the full details and information. To follow all our news, you can subscribe to the alerts system or to one of our different systems to provide you with all that is new.