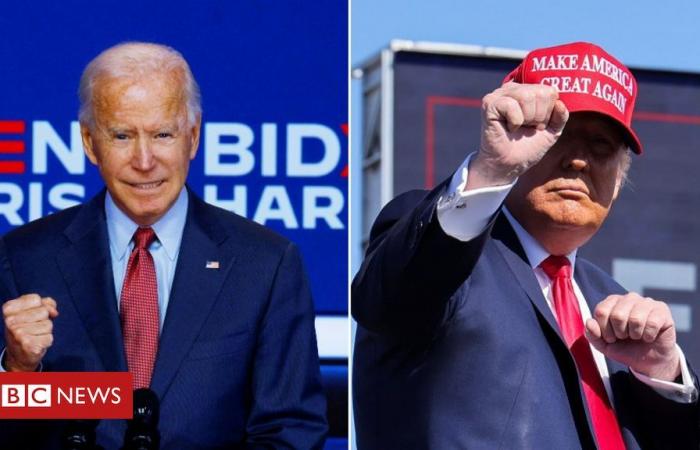 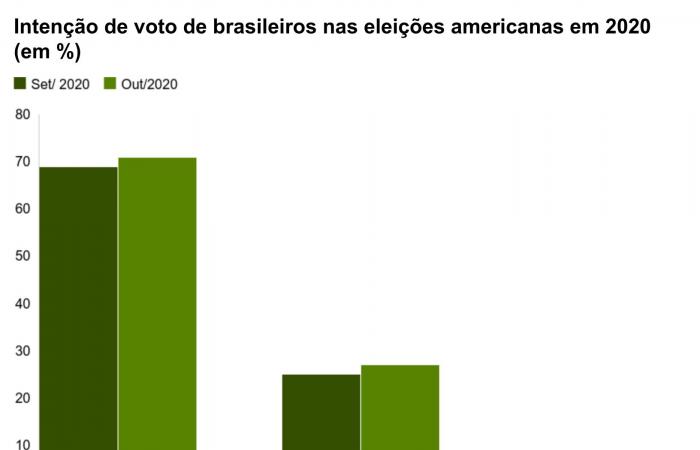 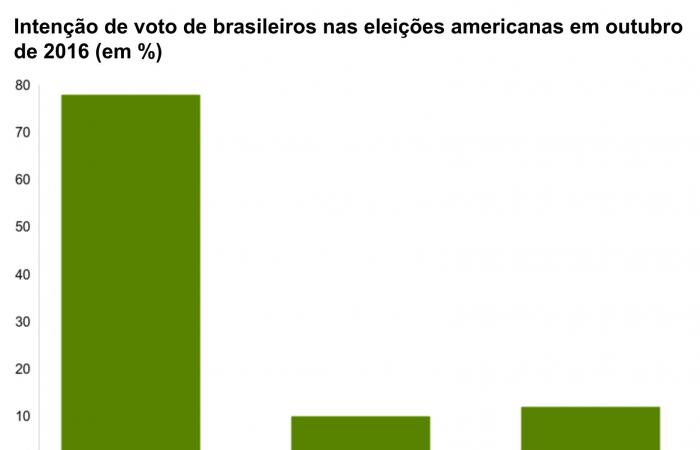 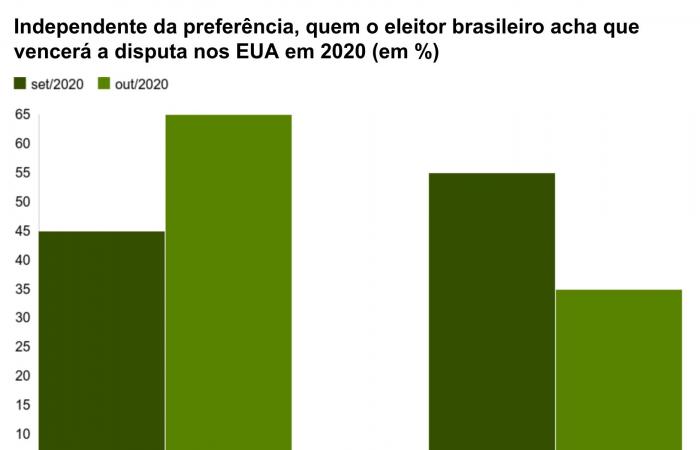 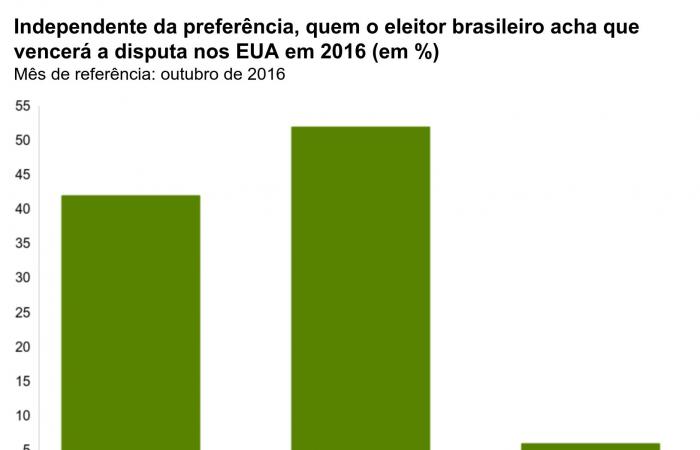 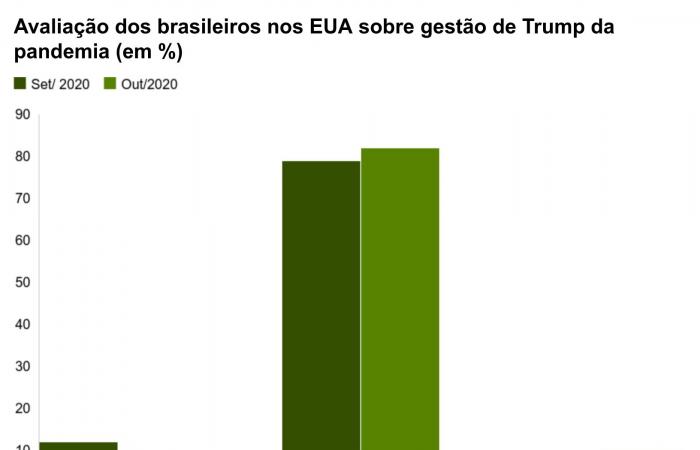 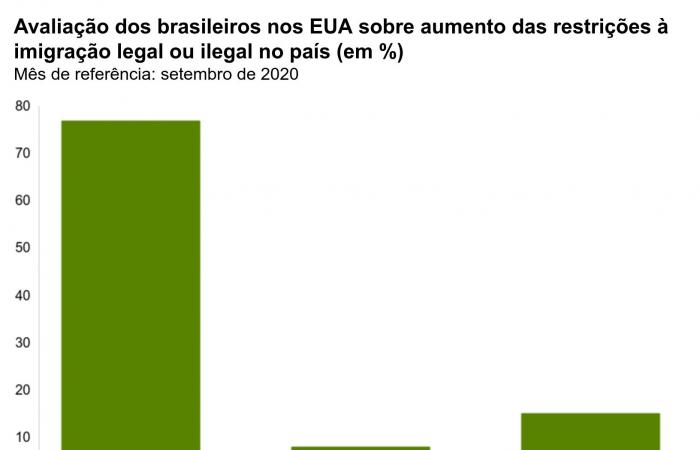 If it depended only on the Brazilian community in the United States, the American presidential election, which will be held in five days, would already be defined. That’s because 71% of Brazilians who live in the country and have the right to vote say they prefer Democrat Joe Biden, while 27% opt for Republican Donald Trump, who is running for reelection. This is indicated by a survey carried out by Instituto Ideia and obtained exclusively by BBC News Brasil.

Ideia heard 800 Brazilians over 16 years old, between October 26 and 27, in the states of Florida, Virginia, Maryland, New Jersey, New York, Massachusetts, Texas, Illinois and California, in addition to the District of Columbia, where it is located the country’s capital, Washington DC. The survey’s margin of error is three percentage points. The institute also found that more than half of these Brazilians have already voted – and added more than 70 million votes already received in the current election. 33% of them sent their ballots via mail. 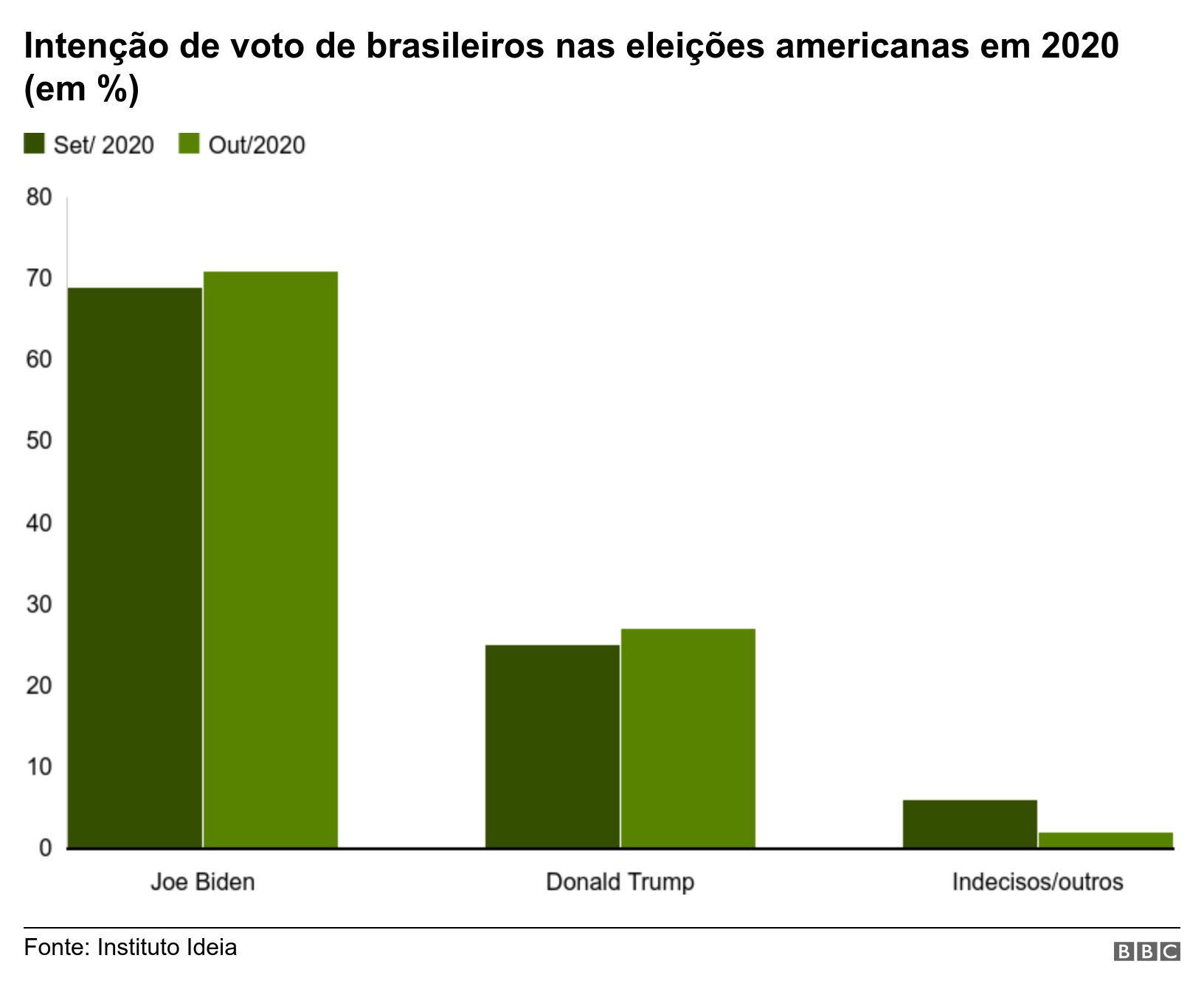 The portrait obtained by the poll shows Democrat Biden with a 44 percentage point advantage over his opponent Trump, in a much more comfortable picture than the fiveThirtyEight national research aggregate points out, in which Biden leads with a nine percentage point hand.

What do they expect from those who win the election?

The explanation for the widespread preference for the Democrat also comes from an Ideia poll conducted in September 2020: 77% of respondents said they were opposed to the increase in US government restrictions on legal or illegal immigration.

Asked what the next president’s priorities should be, the Brazilians put the search for an anti-vaccine vaccine in first place (23%), the recovery of the economy (22%) and the improvement of the health system (19 %). Following are items directly linked to the issue of immigration. For 15%, the reform of the American migratory system is the most urgent act of the next president and, for 13%, the president should dedicate himself to creating a way to regularize the undocumented.

It was exactly the content of Biden’s proposal in the last presidential debate among the candidates, a week ago. The Democrat said he would carry out a reform of the system and would send Congress a proposal to give US citizenship to 11 million immigrants living illegally in the United States today.

“Although these Brazilians who can vote are already citizens and are not at risk of deportation, many of them were born here, the children of undocumented immigrants. Or they are the so-called Dreamers, young adults brought to the USA as infants in an irregular condition. For them , the threat that the deportation policies posed or still represent for their families is very real “, explains Maurício Moura, founder of Instituto Ideia and visiting professor at George Washington University, in DC. 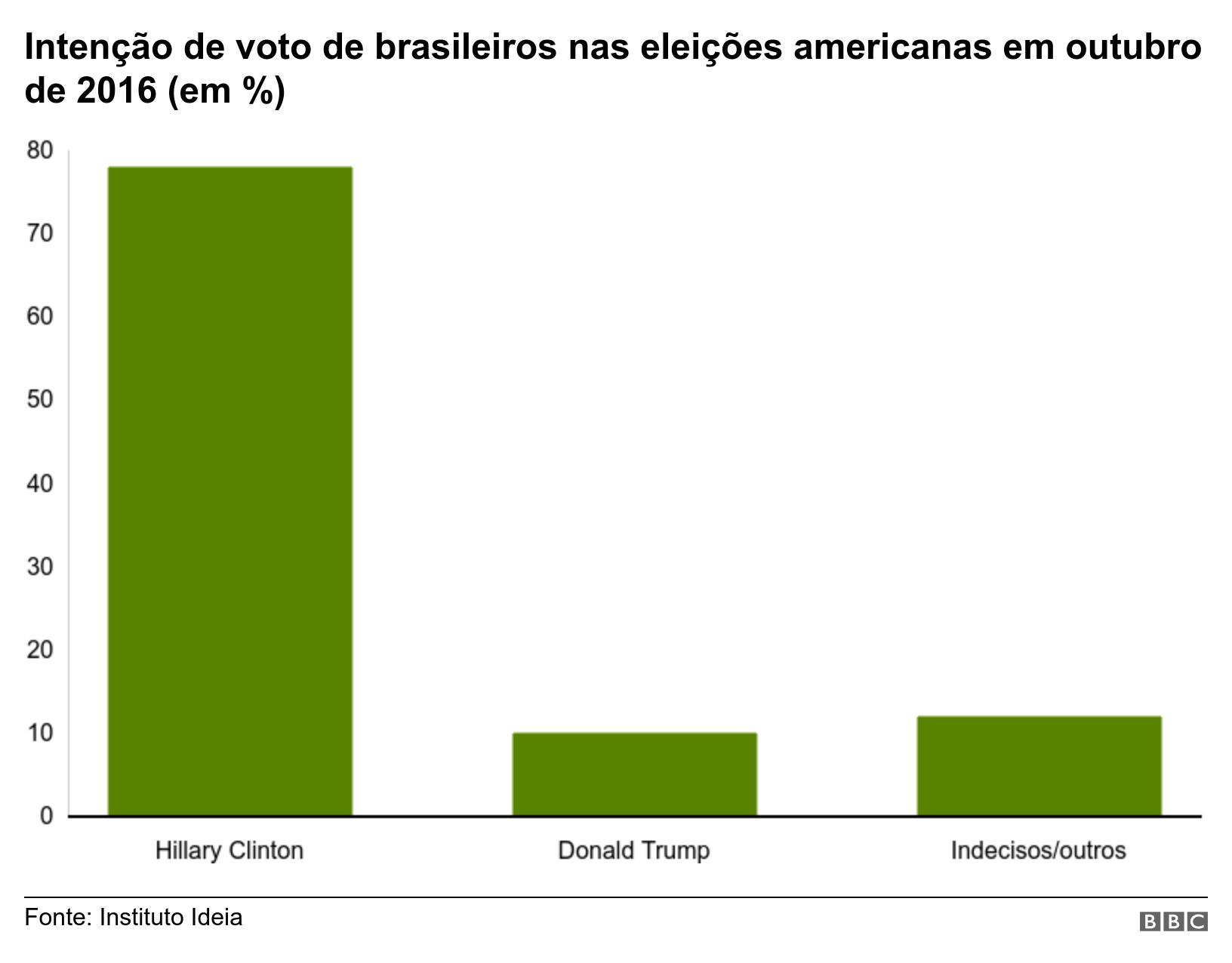 According to Moura, the Brazilian community, made up of about 1.2 million people, associates Trump with an idea of ​​zero tolerance towards immigrants. The Republican was elected in 2016 promising to build a wall on the border with Mexico and put out of the country what he called “bad hombres”, in a reference to undocumented Latinos in the USA.

During his tenure, Trump increased the number of arrests and arrests of undocumented people. In 2018, he instituted a policy of separating thousands of families, including Brazilians, who crossed the border with Mexico without authorization from the American government. Because of the measure, to date, 545 children have never been able to be reunited with their parents.

In addition, in 2019, Americans began to subject Brazilians to summary deportation, that is, without the right to a court hearing. They also began to force immigrants from the country in search of asylum to await the outcome of the process in Mexican territory. Trump also entered the Supreme Court with a request to revoke the Dreamers’ stay in the country.

Although Democrat Barack Obama’s previous government, in which Biden was the vice president, also registered record deportations, for Brazilians, the program advocated by Trump is even more aggressive and threatening.

“Somehow, it is as if Trump does not even allow these people to come, and then expel them. He made this movement unfeasible, and this is serious for the community,” says Moura. 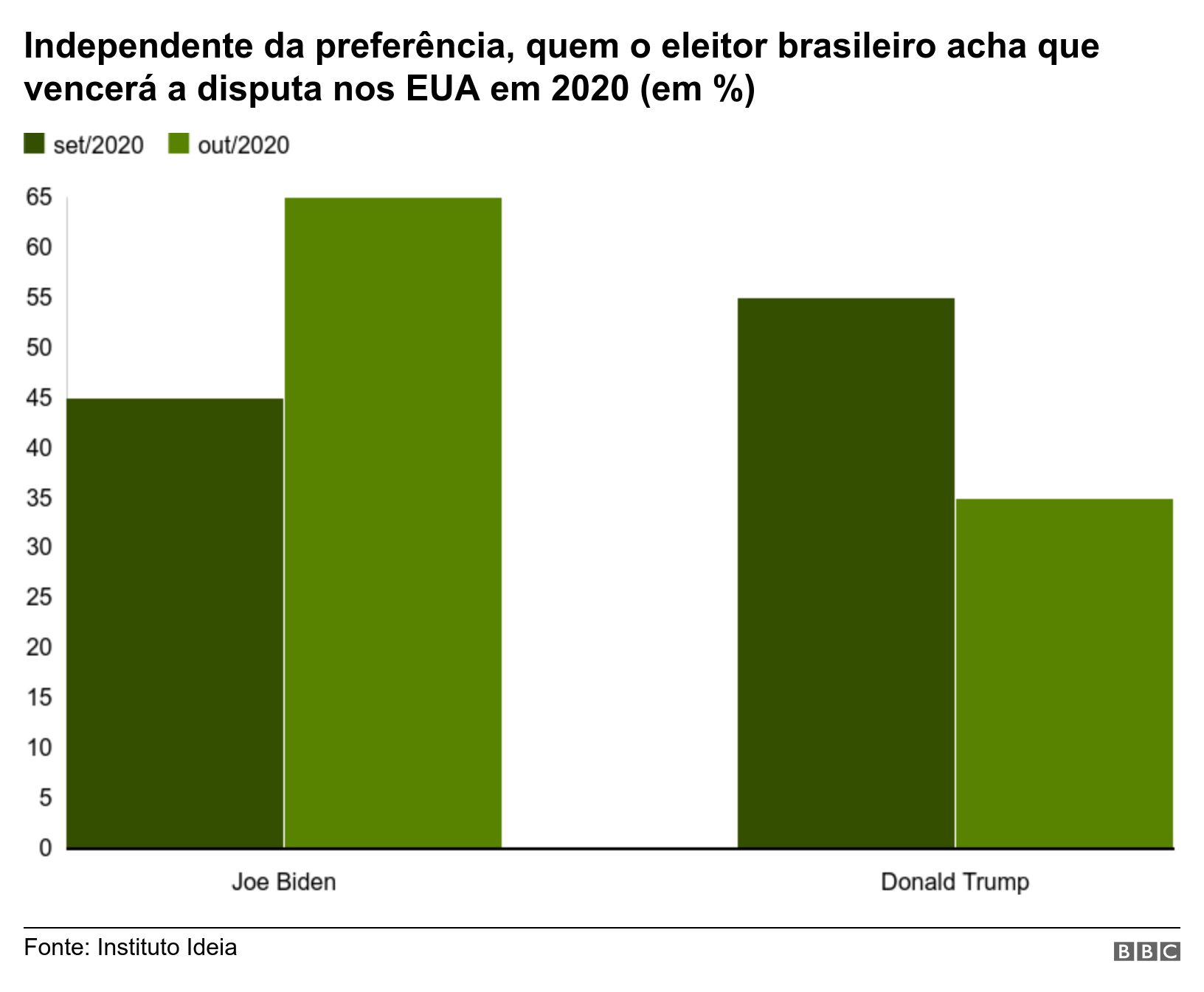 Can Brazilians predict who will win?

Brazilian immigrants tend to live in the suburbs, areas around major cities, such as Miami, Florida, and Boston, Massachusetts.

And while American cities are mostly Democratic and rural areas, Republican, the suburbs function as a kind of pendulum region, which at each election tends to one side of the political spectrum. It is precisely because of this characteristic that voters in these areas have enormous weight: they are usually the electoral balance.

In 2016, the suburbs were crucial to Trump’s victory over Hillary. But by 2020, part of that constituency, especially white women, appears to have landed in the Republican candidacy. Two weeks ago, at a rally in Pennsylvania, Trump himself acknowledged the problem: “” Suburban women, they should like me more than anyone here tonight, because I ended the regulation that brought crime to the suburbs . I allowed them to live the American dream. Suburban women, could you please like me? I saved your neighborhood, right? “

As they live in these areas, Brazilians tend to have, according to Moura, “a greater sense of the electoral reality in the USA” and, therefore, they would be able to take the pulse of the advance of the political dispute and to foresee the result of the election. 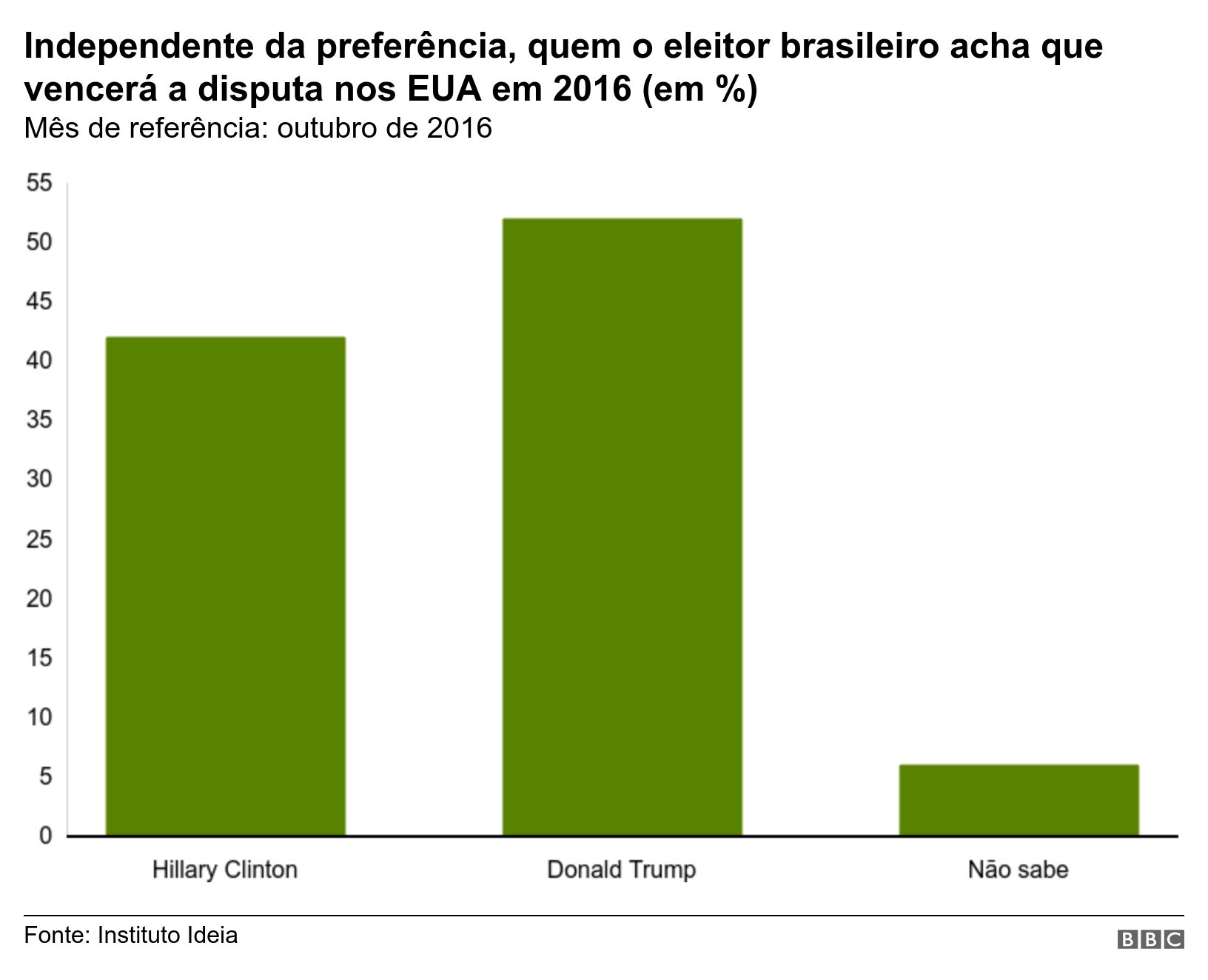 In 2016, Ideia was also in the field to assess the community’s electoral preference and found that 78% of them voted for Hillary Clinton. Despite this, 52% of the Brazilians interviewed guaranteed that it was Donald Trump who would win that election (42% said he would be the Democrat). They went against – and rightly so – what was said by the research institutes, which gave Hillary an advantage of about five percentage points over Trump, and by the press, whose reading was that the Democrat was the favorite.

Now, however, 65% of Brazilians spear Biden’s victory, against 35% who say it is Trump who will win. These figures represent a change from what the community itself predicted in September 2020: at that time, Trump was seen by 55% of Brazilians as the favorite.

Between one survey and another, two events seem to have weighed on the fate of the dispute and the perception of Brazilians.

The first was the presidential debate between Trump and Biden in late September. On that occasion, Trump interrupted his opponent dozens of times, creating a chaotic atmosphere in the debate. The assessment of the Republican’s own campaign was that his behavior hindered him. So much so that, for the last debate, last week, the president completely changed his stance towards his opponent and the cameras.

The second event was the contamination of Trump by coronavirus in early October. The president’s covid-19 symptoms were strong – with a drop in blood oxygen and high fevers – and forced the Republican to spend four days in the hospital. According to Moura, “the disease has gone badly for Trump”, since he has thrown a topic on which he is not doing well.

The president’s conduct in relation to the pandemic is poorly evaluated by Americans in general, but his image is even more negative in the Brazilian community: in October, 82% of Brazilians say that Trump performed poorly in the health crisis and only 9% approved it. In September, before his infection, the numbers were slightly better for Trump. 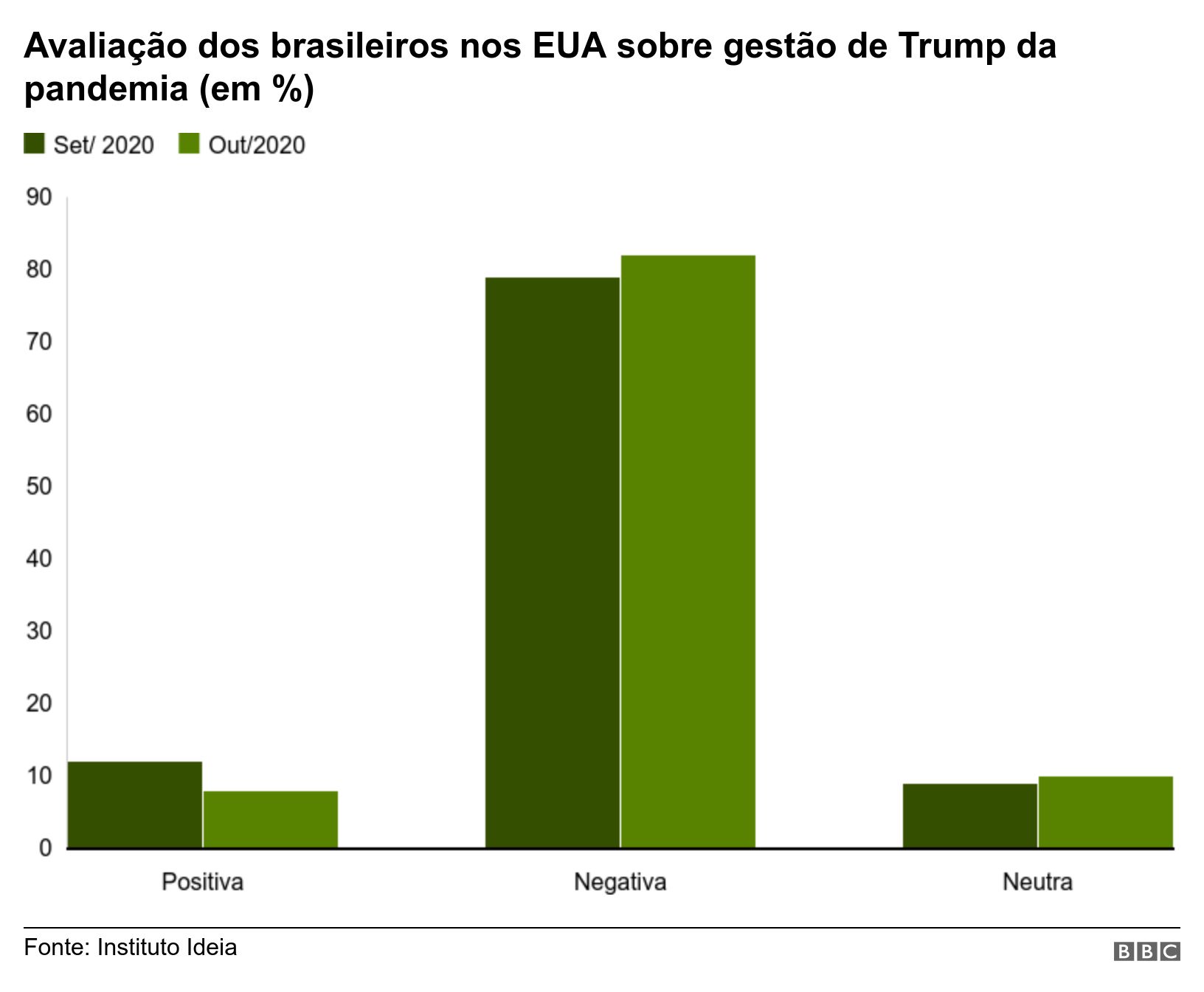 With nearly 230,000 deaths from covid-19, the United States is the world leader in human losses in the pandemic, in absolute numbers. And they are now facing the third wave of coronavirus in their territory. Latinos are one of the groups hardest hit by the disease: 22% of Latino adults have already caught the new coronavirus, compared with 14% of the American population in general, according to Pew Research.

And despite that, Trump has recently repeated that the situation “is not so serious” and that the virus “is going away”. At the start of the outbreak, the American president publicly underestimated the pandemic – while telling journalist Bob Woodward to be aware of the seriousness of the situation. He threatened to cut funds from governors who would not suspend quarantines and reopen the economy. It adopted a measure to expel international students if their schools and universities did not resume face-to-face classes – the government later backed down. He defended therapies without scientific proof, such as hydroxychloroquine and even suggested the injection of disinfectant, at the same time that he refused to use a mask and to determine its mandatory use in the country.

In 4 years, Trump has improved among Brazilians

And although he is poorly rated in relation to covid-19 and rejected by a large part of the community for its immigration policy, in the past four years, Trump has managed to gain ground among Brazilians living in the U.S.

In October 2016, the Republican intended to vote only 10%. Now, 27% of Brazilians in the US claim to vote for him. The numbers, by the way, approach the approximately 30% of the Latin community that has supported Trump in the country. 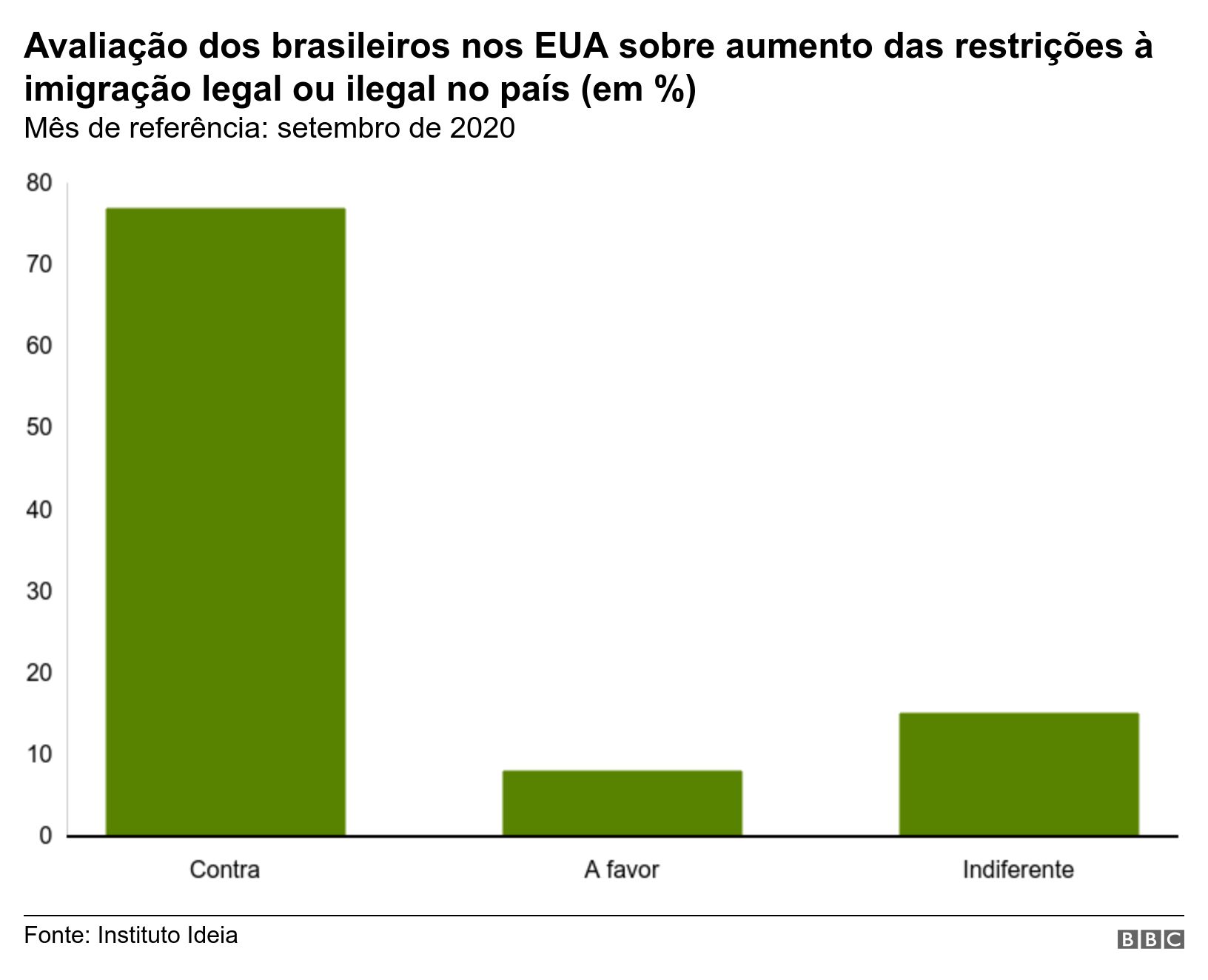 The preference has a lot to do with Trump’s management of the economy in the pre-pandemic, when the country recorded steady growth and full employment. “A common anecdote among Brazilians is that as they thrive on life, they stop being Democrats and become Republicans,” says Moura.

According to him, especially among Brazilians in their 40s or 50s, entrepreneurs, who have their own business and employees under his command, Republicans appear strongly. On the one hand, this group praises the tax cut for business that Trump has adopted. On the other hand, he fears that Democratic governments will give strength to unions that could harm their business.

Factors such as religious conservatism may also motivate some – especially in a strongly evangelical community – but they are a minority aspect, analyzes Moura.

Likewise, the association between Bolsonaro and Trump does not appear to have resulted in major electoral gains for the American. “Although the Brazilian community voted hard for Bolsonaro in 2018, his rejection of Trump’s immigration policy explains this phenomenon of the anti-Trump bolsonarista. We are talking about personal survival and the voter’s family, they are direct impacts on his life, this usually speaks louder than political and ideological sympathies “, says Moura.

These were the details of the news US election: 3 in 4 Brazilians living in the country vote... for this day. We hope that we have succeeded by giving you the full details and information. To follow all our news, you can subscribe to the alerts system or to one of our different systems to provide you with all that is new.