A source reveals to CNN the details … Who was the... 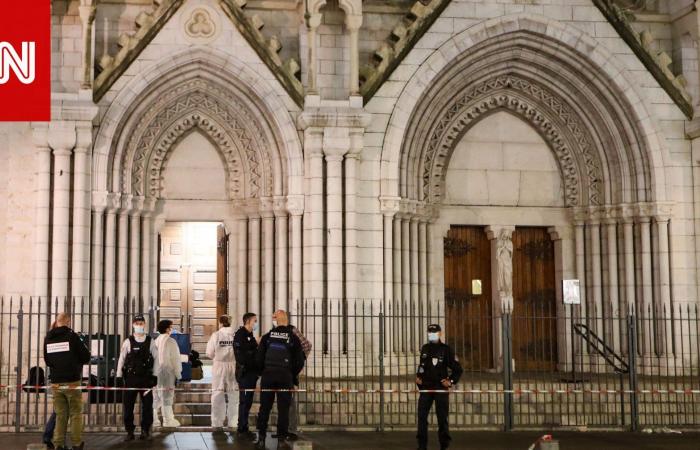 Atlanta, USA (CNN) – A responsible source familiar with the investigation into the attack that occurred at Notre Dame Church in Nice, France, which killed 3 people with a knife, revealed details of the accused of carrying out the attack and how he arrived in France.

The French police announced that the perpetrator of the “terrorist attack” was Ibrahim Al-Issawi, born in 1999 (21 years old). The Mayor of Nice, Christian Estrosi, said that the police had shot the perpetrator, but he was still alive and in detention.

A source familiar with the investigation said, in statements to CNN, that the attacker in the French city of Nice arrived in Europe first via the Italian island of Lampedusa last September. The source added that the talks, which were monitored during the past two weeks, had raised fears within the French security services that churches in France could be attacked.

The Italian Interior Ministry said that Ibrahim al-Issawi is a Tunisian national, and the Italian police spotted him in Bari on October 9th, and gave him a 7-day period to leave the country, and since he did not have any previous criminal records and the Tunisian authorities did not report him as a potential terrorist, he did not accompany him. Straight to the border.

Meanwhile, the Tunisian prosecutor opened a judicial investigation into “a suspicion of a Tunisian commission of a terrorist crime.” The head of the media office of the Tunisian Court of First Instance said that Mohsen El-Daly said that the Public Prosecutor of the Judicial Pole for Combating Terrorism in Tunisia had “opened a forensic investigation into the suspicion of Tunisian commission of a terrorist crime that resulted in killing and wounding people outside the borders of the country.”

He pointed out that an investigation was opened following the attack that targeted people in a church in Nice, and “the presence of information and data about the identity of the perpetrator, indicating that in principle he has Tunisian nationality,” according to the official Tunisian News Agency.

The Nice attack took place less than two weeks after the French teacher Samuel Bate was slaughtered after he showed cartoons of the Prophet Muhammad in his class, and the attack came amid popular campaigns in Islamic countries to boycott French products after its president, Emmanuel Macron, declared his support for the publication of the cartoons on the basis of “freedom of expression” and his statements about Islam. .

These were the details of the news A source reveals to CNN the details … Who was the... for this day. We hope that we have succeeded by giving you the full details and information. To follow all our news, you can subscribe to the alerts system or to one of our different systems to provide you with all that is new.