France … revealing the identity of the Nice attacker and the... 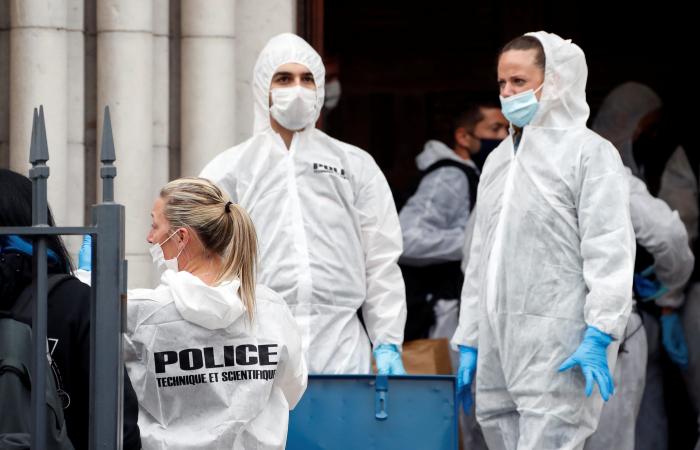 French police sources revealed the identity of the perpetrator of the attack that killed 3 people in Notre Dame Church in Nice, France.

Informed sources told AFP and Reuters that the attacker was a 21-year-old Tunisian, and he arrived in Europe from the Italian island of Lampedusa at the end of last September and to France early this month.

Judicial sources said, in response to questions by Agence France-Presse, that the identity of the attacker was not officially confirmed, but that the young man was according to a source close to the file called Ibrahim Aouissawi, which was confirmed by a second source.

The sources added that Awassawi arrived in France from Lampedusa in Italy, where the local authorities required him to quarantine before he was forced to leave Italian territory and be released. He did not apply for asylum in France.

According to another source, the investigators had nothing in their possession except for a file belonging to the Italian Red Cross, indicating that his name was Ibrahim Ouesawi.

Reuters quoted a Tunisian judicial spokesman to Reuters on Thursday as saying that Tunisias counterterrorism service had opened an investigation into the suspicion of Tunisian involvement in the Nice attack.

Mohsen El-Daly told Reuters that “the judicial counter-terrorism pole has opened a forensic investigation into the suspicion of a Tunisian involvement in the Nice terrorist attack.”

The French police announced today, Thursday, the killing of 3 people and wounding others, in a knife attack in the southern city of Nice, while a fourth “threatened bystanders” was killed by police bullets near the city of Avignon.

The attack took place in the vicinity of the “Notre Dame” Church in the city center at nine oclock local time.

The police said that a man and a woman were killed in the “Notre Dame” church, while a third died after being seriously injured in a nearby bar where he had taken refuge.

The incident comes while France has recently witnessed a controversy over the statements of a large section of politicians targeting Islam and Muslims, following the killing of a history teacher named Samuel Patty (47 years), on October 16, at the hands of a French student (18 years) angered by Patti displayed “offensive” cartoons of the Prophet Muhammad to his students, claiming freedom of expression.

The French President described the killing of Bate, that day, as undermining freedom of expression and an “Islamic terrorist attack,” vowing to address this “terrorism”, as he put it.

His speech was widely rejected in Islamic countries, and his statements were described as incitement to hatred, and a campaign was launched to boycott French products in the Arab and Islamic world.

Macron: The Nation stands with our Catholic citizens against the “Islamist terrorist attack”

3 dead in Nice attack, and French police kill a person near Avignon

These were the details of the news France … revealing the identity of the Nice attacker and the... for this day. We hope that we have succeeded by giving you the full details and information. To follow all our news, you can subscribe to the alerts system or to one of our different systems to provide you with all that is new.