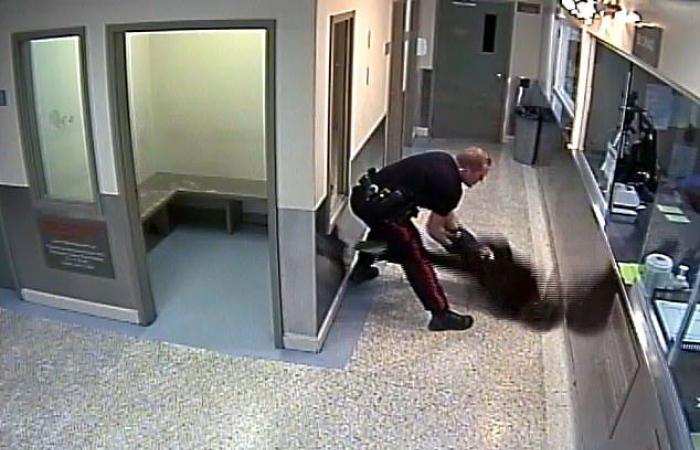 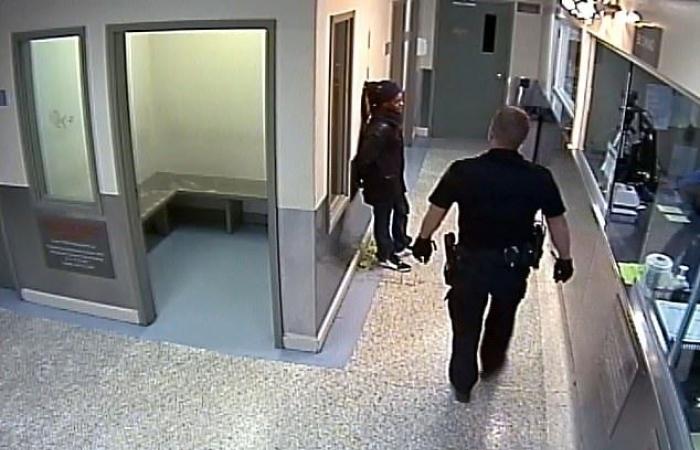 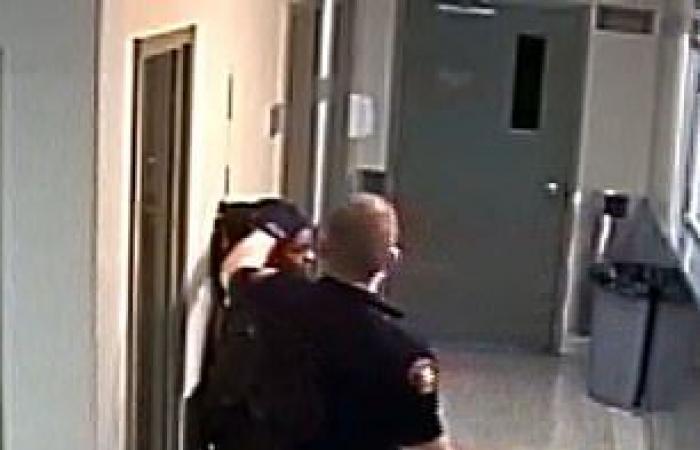 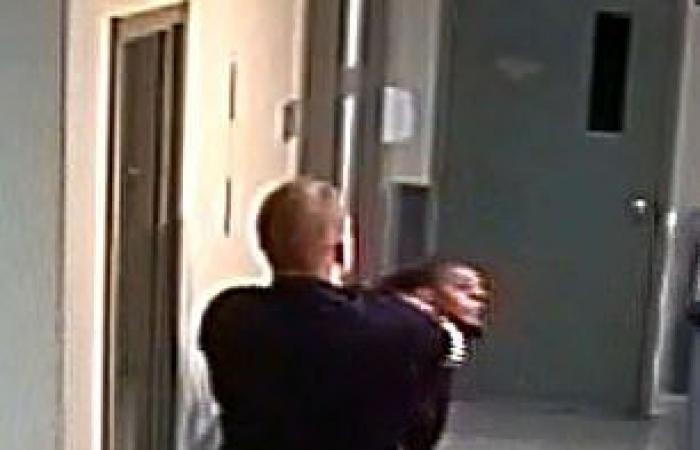 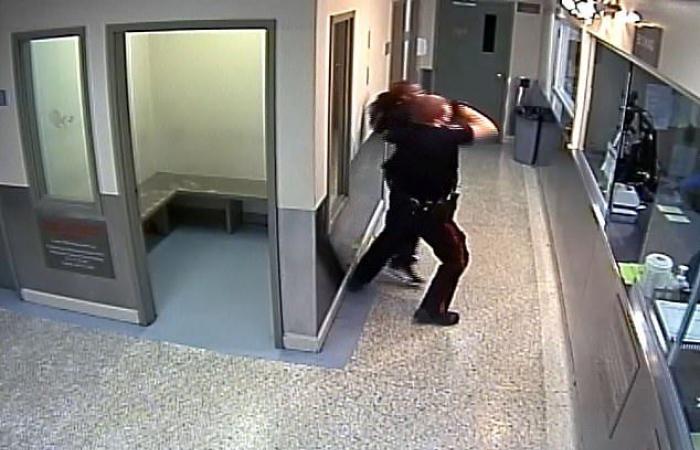 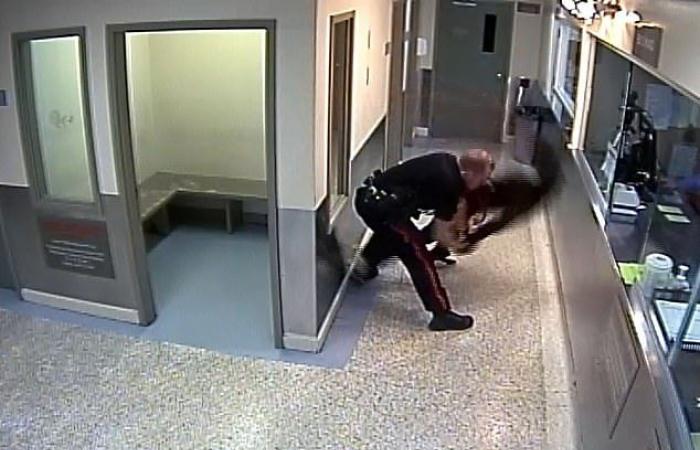 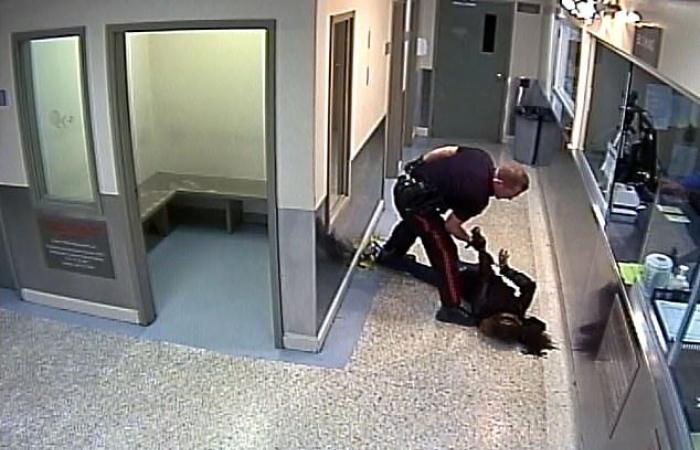 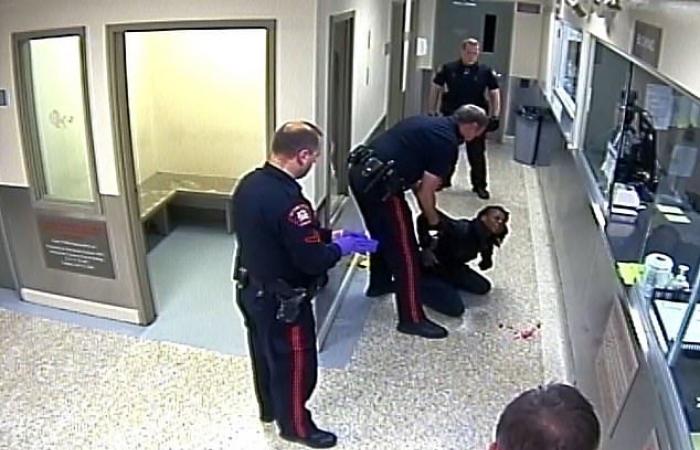 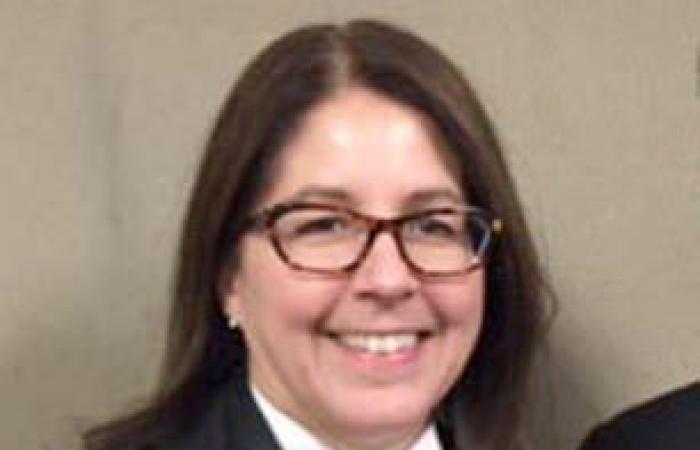 Shocking surveillance footage revealed a Calgary police officer slamming a handcuffed black woman face first on the floor and breaking her nose in what one officer described as “the worst violence in 30 years.”

Calgary Police Officer Alex Dunn was charged with assault on charges of the violent incident that occurred during the December 2017 arrest of Dalia Kafi in Calgary, Alberta, western Canada.

Dunn is currently on trial over the alleged assault but has not been released from the force and is currently serving in an administrative role.

The video, which was played during his trial on Monday, shows the police officer throwing Kafi to the ground in a “judo throw”, causing her face to bounce off the concrete and leave her in a pool of blood.

A Calgary police officer is on trial for beating a handcuffed black woman face first on the floor and breaking his nose in what one officer has described as “the worst violence in 30 years.” Made the footage of the incident above

The shocking footage of the incident was shown to the court this week, and Provincial Court Judge Michelle Christopher agreed to make it available to media members.

It shows the officer approaching the then 26-year-old Kafi, who is handcuffed to the wall in a processing plant for police arrests.

Dunn grabs Kafi’s head and tries to pull off the headscarf she’s wearing.

Kafi tries to lean away from him, but Dunn pulls it off her head.

The policeman then forcibly throws her onto the floor face in one swift motion, with her face visibly bouncing off the floor.

Dunn holds Kafi’s wrists, which are handcuffed behind her back, and her arms are held in the air while she lies still on the floor for a moment.

Kafi stirs slightly while Dunn continues to hold her arms and looks at her on the floor for a few seconds without moving to check her injuries.

Another male officer then walks by about 15 seconds later and Dunn steps back.

The policeman helps Dafi on his knees and blood splatters can be seen from the face of the alleged victim on the floor.

Another two male officers appear in the frame and one puts on medical gloves.

The footage does not contain audio. 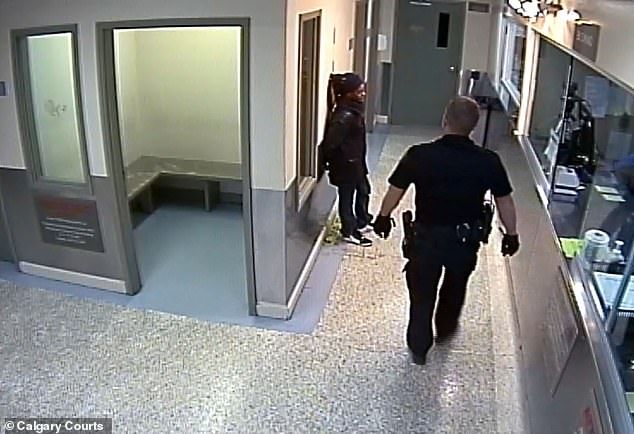 Calgary Police Officer Alex Dunn was charged with assault while Dalia Kafi was arrested in Calgary in December 2017. The shocking footage of the incident was shown to the court at Dunn’s trial this week 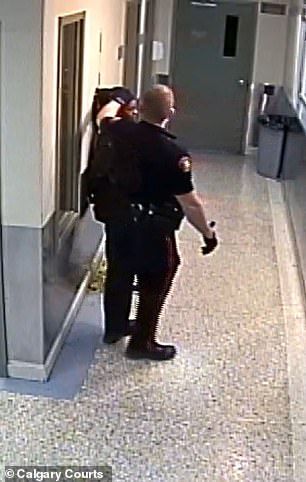 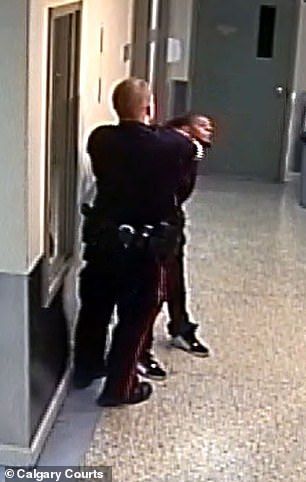 It shows the officer approaching 26-year-old Kafi, who is handcuffed to the wall in the police processing plant. Dunn grabs Kafi’s head and tries to pull off the headscarf she’s wearing 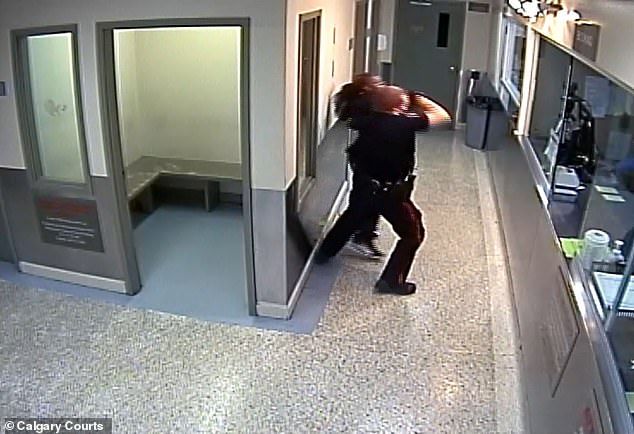 The policeman then forcibly throws her onto the floor face in one swift motion, with her face visibly bouncing off the floor 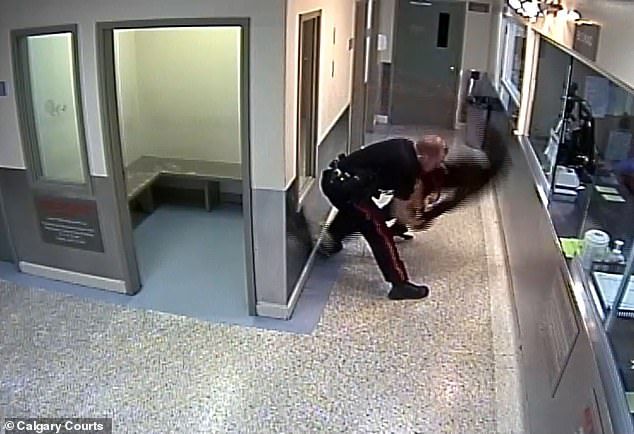 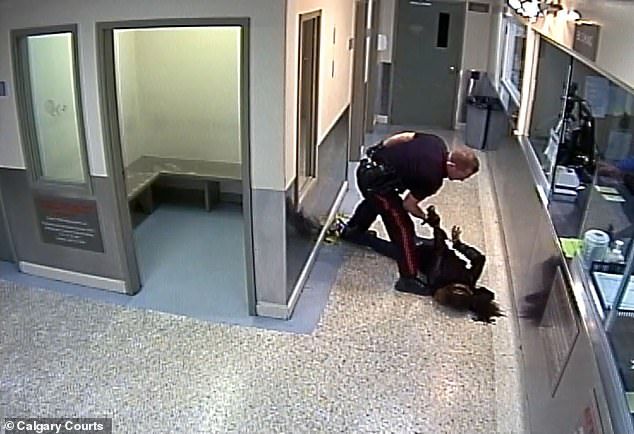 Dunn holds Kafi’s wrists, which are handcuffed behind her back, and her arms are held in the air while she lies on the floor for a moment in a pool of blood

Kafi was taken to the hospital, where she needed stitches in her lip, and was operated on for a broken nose.

Calgary Police Staff Sgt. Gordon Macdonald testified that his colleague’s actions were the “worst use of violence” he had seen in his 30-year career, and said he could hear the black woman’s bones crack when her face did Touched the ground.

“There is only one type of sound when someone’s bone falls on the floor and I heard that,” he said from the stand, according to the CBC.

,I guessed [Dunn] that it was the worst use of force I’d ever seen, ”said Macdonald.

Macdonald, who was the commanding officer of the arrest unit, said Kafi “stepped back” from Dunn when he tossed her face first into a “judo throw” and replied “no” when asked if Kafi was up I acted in a way that justified the use of force.

He said the black woman complained about her arrest but was in no way threatening or aggressive towards any of the officers.

He said he feared the worst for Kafi after seeing and hearing the attack and called paramedics.

Macdonald said it was standard practice for the arrest officer to escort arrestees to the hospital, but he made the decision that it was not appropriate for Dunn to remain in the presence of the 26-year-old. 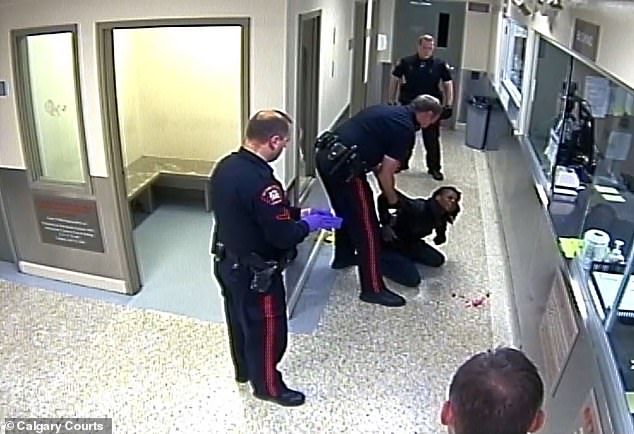 Other officers arrive and Kafi is taken to the hospital, where she had lip stitches and an operation for her broken nose. Dunn is currently on trial over the alleged assault but has not been released from the force and is currently serving in an administrative role

Kafi said she went to a friend’s house to plait hair on the night of December 12th when she realized she was outside from 10 p.m. to 6 a.m. after her curfew.

She told the court that a friend was driving her home when they were stopped because they turned on a yellow light.

Kafi said she first gave the police her sister’s name for violating her curfew.

Then she gave Dun her real name and was arrested, handcuffed and taken to the arrest department.

She said to stand against a wall to have her picture taken of the incident. 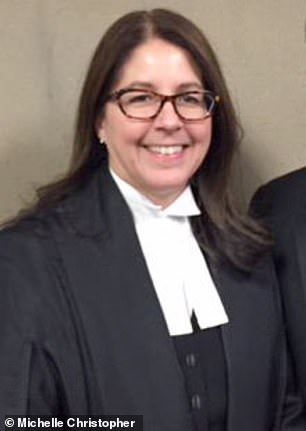 The black woman told the court she passed out for a moment after lifting her head off the floor and found that her face was covered in blood.

Kafi’s mother made a guttural noise and walked out of the courtroom after seeing the disturbing footage of the alleged attack on her daughter on Monday, CBC reported.

Dunn was charged with assault after colleagues raised concerns and opened an internal investigation.

The policeman was suspended for a year on payment before he was brought to justice. However, after delays due to COVID-19, he was allowed back to work in “non-operational roles,” Calgary police said.

The force’s internal disciplinary process, which will be completed after the trial, will also determine whether Dunn’s use of force was appropriate and what disciplinary action, such as dismissal, should be taken.

“In general, police officers are trained to de-escalate conflicts and use the least amount of force necessary to safely resolve a situation.

“We expect them to obey the law, our guidelines and our training.”

The case comes a month after a judge ruled that several Calgary police officers laughed and mocked a black man who was bitten by a police dog.

Judge Heather Lamoureux ruled in September that 24-year-old Latef Reakwon Tag El Din had his charter rights to the life, liberty and safety of those injured by several Calgary police officers when they mocked him for asking for of his injuries to be taken to hospital.

The judge slammed the police for carrying out a “cruel and unusual punishment” and making the blacks “suffer unnecessarily.”

These were the details of the news The surveillance footage shows a Calgary police officer slamming a handcuffed... for this day. We hope that we have succeeded by giving you the full details and information. To follow all our news, you can subscribe to the alerts system or to one of our different systems to provide you with all that is new. 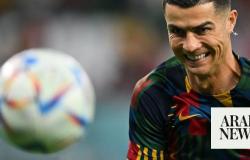