Exclusive … Details of the Syrian fighters’ transfer to Qara Bagh... 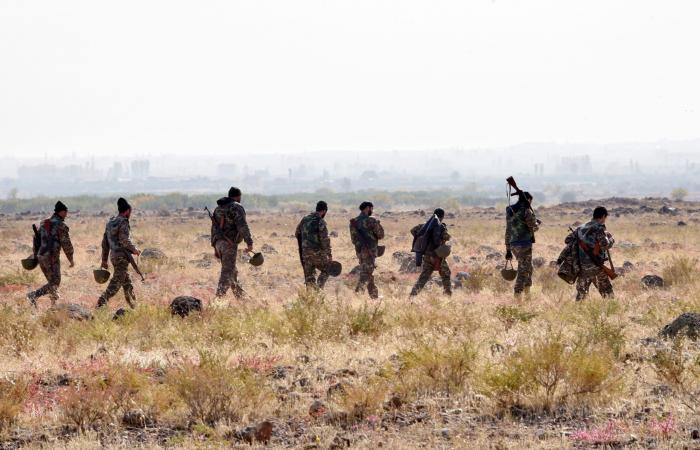 On the tenth of last September, the young “Muhammad A.”, who resides in a camp in Idlib countryside on the Syrian-Turkish border, moved to Afrin in the countryside of Aleppo, and arrived at a camp belonging to the “Sultan Murad” faction with two of his companions.

This was the first stop for those Syrians, who decided to go to Azerbaijan to “guard the Turkish bases”, after a broker (a local mediator) offered them as they described, with whom they had contacted via the application of “WhatsApp”, days before preparing to exit.

Muhammad, who requested that his full name not be used for fear of being subjected to any “security problems”, said in statements to Al-Hurra website that he spent two days with his comrades in the camp, which included dozens of heavily armed fighters, to be transported by the cars of the said faction (Sultan Murad ) To another area called “Hawar Kilis,” a town close to the border with Turkey in the northern countryside of Aleppo.

This area is considered a center for the gathering of Syrian fighters, before they were transferred to the Turkish interior, and then to Azerbaijan, through military aircraft (Yushun).

Muhammad says that the main factor that prompted him to consider going to Azerbaijan is “poverty” and the lack of job opportunities in northern Syria, which is under the control of the Syrian opposition factions, according to him.

The young man explained to Al-Hurra website that he received a financial offer for going to that front, worth a thousand dollars, provided that he would work to guard the Turkish bases in the region, away from fighting on the fronts directly, which was different to the truth, on the ground. .

With the intensification of the battles between Azerbaijan and Armenia in the vicinity of the Nagorno Karabakh region, several reports spoke of the arrival of Syrian fighters to the region, to participate in the war for the benefit of the Azerbaijani army, the most prominent of which was published by Reuters and the British newspaper, The Guardian, and what was confirmed by the Observatory. Al-Suri for Human Rights, “in several reports, despite Ankara’s denials.

But the arrival of the fighters was only possible with the support of Ankara, whose lands are the crossing bridge from the countryside of Aleppo to the Caucasus region, and it is considered the spearhead in that, and the leaks and confirmations that have been published are from the newly arrived fighters themselves, with whom he spoke. Al-Hurra, and with their relatives, confirm these reports.

After the arrival of the young man, “Muhammad” to the gathering area in the town of “Hawar Kilis”, he was transported with more than 150 fighters by passenger buses to the Turkish city of Antakya, and from its airport they were transported by “Yushin” planes to Istanbul, then to the Turkish capital, Ankara, which was the last stop in Their flight, before they were transferred by military aircraft to the Azerbaijani capital, Baku.

“We arrived in the capital, Baku, and then we were transported by buses to the outskirts of Nagorno Karabakh,” Muhammad said, adding that “the details of the offer at this stage changed the idea of ​​guarding the Turkish points to participate in fighting on the fronts against the Armenian army.”

He added, “After we reached the borders of the region, we stayed in a camp for one day, and on the second day we were dragged to the fronts to fight,” noting that he was able, with several military groups, to control areas that amount to about four square kilometers on a daily basis.

Speaking to Al-Hurra, the young man estimated the number of Syrian fighters in Azerbaijan at about 1500.

According to him, the operatives came from several factions affiliated with the National Army, most notably: the Hamza Division, Sultan Murad, and the Suleiman Shah Brigade, nicknamed “Al-Amshat” after its commander, Muhammad al-Jasim Abu Amsha.

The aforementioned factions receive military and logistical support from Turkey, and are active in northern Syria, especially in the “Euphrates Shield” and “Olive Branch”, in addition to the “Peace Spring” in eastern Syria.

According to what local activists from the countryside of Aleppo said in statements to the Al-Hurra website, the exit of the Syrian fighters to Azerbaijan is mainly coordinated by the aforementioned factions, which have recently deployed local mediators affiliated to them (brokers), to promote the idea of ​​fighting in the Nagorno Karabakh region. In exchange for exorbitant sums of money.

The Armenian ambassador in Moscow had said earlier, last month, that Turkey had sent about 4,000 fighters from northern Syria to Azerbaijan while they were fighting there, which was denied by an aide to Ilham Aliyev, President of Azerbaijan.

On the other hand, Azerbaijan denied the validity of these reports, as Hikmat Hajiyev, assistant to the President of Azerbaijan for foreign policy affairs, said that saying that Syrian fighters are coming to help his country is “complete nonsense,” adding, “Our armed forces have enough personnel and reserve forces.”

As they were thrown into the Karabakh battles that did not subside so far, on the side of the Azerbaijani army, the Syrian fighters became the fuel of the conflict, as mourners on social media, in the past weeks, followed dozens of dead Syrians.

Among the dead, which the Al-Hurra website was able to document, were: “Major” Kinan Farzat Abu Muhammad, Yasser Farzat Abu Omar, Bilal al-Taybani and Walid al-Ashtar Abu Basil. ”They fell last September, days after their arrival in the vicinity of Nagorno Karabakh region, and they came from The city of Rastan in the countryside of Homs, and they had arrived in the countryside of Aleppo, according to the settlement agreement signed in 2018.

A relative of Kinan Farzat said, in statements to Al-Hurra, that the latter went out to fight in Azerbaijan “under the coordination of the Sultan Murad faction, which was working within its ranks.”

The relative of the dead man, who refused to be named, added that “the leaders of the factions are working to get the young men out to fight alongside the Azerbaijani army, through several methods, the most prominent of which is brokering.” Turkey and then to the fronts. ”

The fighter, Kinan Farzat, left behind after he was killed, five children who no longer have any breadwinner, according to his relative, in addition to the families of his two brothers who had been killed, in recent years, in the battles in northern Syria, in the countryside of Aleppo and Idlib.

While the fighter Yasser Farzat Abu Omar left behind his two wives and five children as well, without any breadwinner, in light of the lack of any clarifications about the financial compensation that is supposed to accrue to the families of the dead, who went out to fight in Azerbaijan.

According to the source that the “Al-Hurra” website spoke to, the corpses of the documented dead returned to the countryside of Aleppo in the same way that the fighters left when they were alive. As if nothing had happened. ”

Why throw mercenaries in the fighting?

On the other hand, other media reports talked about the arrival of Syrian fighters also to the opposite fronts, to support the Armenian army, which Baku referred to in several statements by its officials in the first days of the outbreak of clashes in the vicinity of “Karabakh” region.

However, the doctrine of the Syrian fighters supporting the Armenian army is radically different from their counterparts on the other side, as the two sides are divided between the opposition factions supported by Ankara on the one hand, and the Assad regime, backed by Russia, on the other hand.

Director of the Center for Justice and Accountability Muhammad al-Abdullah, in statements to al-Hurra, specified the goals that Ankara and Moscow want from sending Syrian mercenaries to the Karabakh fronts.

Al-Abdullah says: “The first goal of sending them is to involve them in combat operations, for the sake of military and political interests at the same time.”

The Syrian jurist adds that the countries are sending mercenaries in order to “deny their official participation in the fighting, and here the difference between the official forces and the unidentified unidentified forces is possible.”

Other goals set by al-Abdullah also behind sending Ankara and Moscow mercenaries to the Karabakh fronts, and they are related to attempts to disavow the international laws that regulate the battles, known as international humanitarian law, as well as disavow the political and legal consequences.

On the other hand, perhaps the most prominent, Al-Abdullah indicates that using mercenaries in wars would achieve psychological goals in support of the party they support on the ground.

He explains that “mercenaries are more inclined to commit violations of looting, pillage and field killing, and they play a fundamental role in spreading terror and terrorizing the souls of civilians, which distinguishes them from official armies, whose movements are calculated one after the other.”

These were the details of the news Exclusive … Details of the Syrian fighters’ transfer to Qara Bagh... for this day. We hope that we have succeeded by giving you the full details and information. To follow all our news, you can subscribe to the alerts system or to one of our different systems to provide you with all that is new.