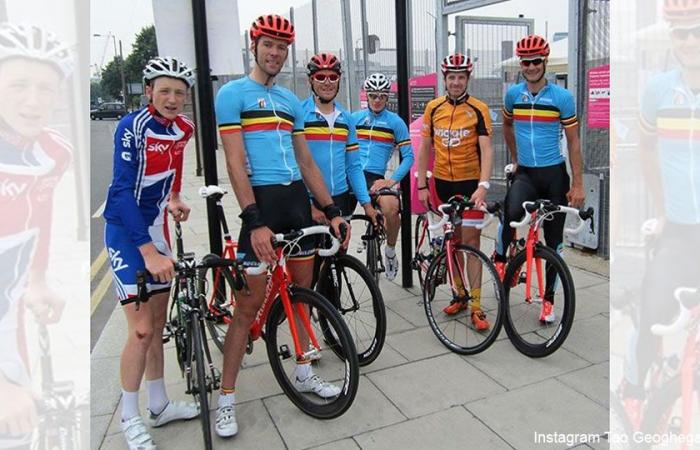 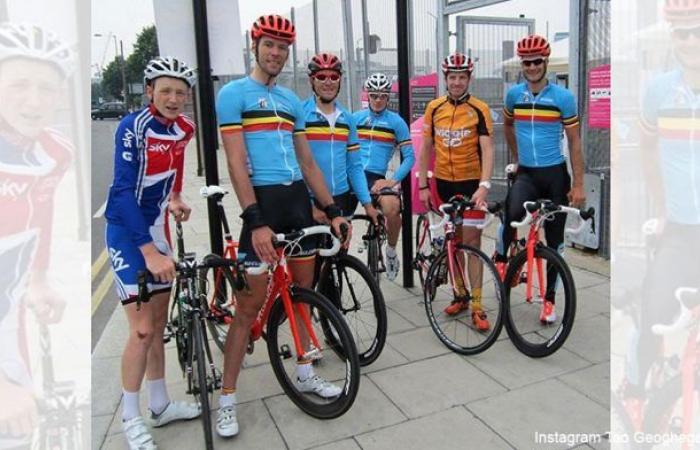 Yesterday, Tao Geoghegan Hart (25) won the Tour of Italy. Eight years ago he had the day of his life when he was allowed to go out with the Belgian team during the Olympic Games in London as a young driver. Meet the British rider who looked up to Tom Boonen, Philippe Gilbert and Sir Bradley Wiggins.

London 2012: on the road with the Belgian team

Tao Geoghegan Hart starts racing as a teenager and is quickly part of the British talent program.

When the 2012 Olympics take place around the corner, 17-year-old Tao can’t help but be amazed. He even manages to complete a training ride with his Belgian heroes. Tom Boonen, Philippe Gilbert, Greg Van Avermaet, Jürgen Roelandts and Stijn Vandenbergh take him on the road.

Years later, he thanks them again when Boonen says goodbye to cycling. “He was already a hero before we took this photo in 2012,” recalls Tao. “It was a very special day for me.”

A coffee stop is also part of a training ride. Little Tao is there early and reports with a photo shoot on Instagram.

“Really good coffee”, Tom Boonen writes under one of the posts.

London 2010: on the road with Bradley Wiggins

Of course, little Tao also looks up to toppers from his own country. In early 2010 he will be on the road with Sir Bradley Wiggins, one of the banners of the brand new Team Sky.

Serge Pauwels was then part of the top formation. “Tao and I know each other”, says the Belgian driver who has just stopped. “We had the same trainer for a while and talked regularly in the peloton in recent years. We have been chatting in the past few days.”

“When I was riding for Team Sky, Tao won a race as a teenager. He was allowed to cycle through the center of London with the whole team.”

“Bradley Wiggins was his example, but he even asked me for a photo. Now we are 10 years later and Tao has won the Tour of Italy. A nice story”, smiles Pauwels.

Like many English riders, Tao Geoghegan Hart learns the trade on the slopes, but he can also handle the cobblestones. He shows that 7 years ago as a junior.

In Paris-Roubaix for juniors, Tao rides out of the leading group together with Mads Pedersen (world champion in 2019) and Nathan Van Hooydonck. The young Briton tries to release his companions, but is unsuccessful.

Learned a trade with Axel “The Boss” Merckx

Tao Geoghegan Hart and Nathan Van Hooydonck have more than one common ground. Not only did they stand together on the podium of Paris – Roubaix, they also both rode for Axel Merckx’s American training team.

At the end of 2016, the time was right for a transition to the big Team Sky, but Tao will always call Axel Merckx “The Boss”.

Tao Geoghegan Hart is a tongue twister or so it seems. His father has roots in Ireland. In Irish, Tao stands for Tom, but you pronounce the first name as we say Theo. His last name sounds like Gaygen Hart.

Much easier than writing Teo Geoghegan Hart? You don’t have to tell us.

Report of the final time trial in the Giro:

*The article has been translated based on the content of Source link by https://sporza.be/nl/2020/10/26/toen-kleine-tao-op-pad-mocht-met-tom-boonen-philippe-gilbert-en-greg-van-avermaet~1603727049855/
. If there is any problem regarding the content, copyright, please leave a report below the article. We will try to process as quickly as possible to protect the rights of the author. Thank you very much!

These were the details of the news When little Tao was allowed on the road with Tom Boonen,... for this day. We hope that we have succeeded by giving you the full details and information. To follow all our news, you can subscribe to the alerts system or to one of our different systems to provide you with all that is new.