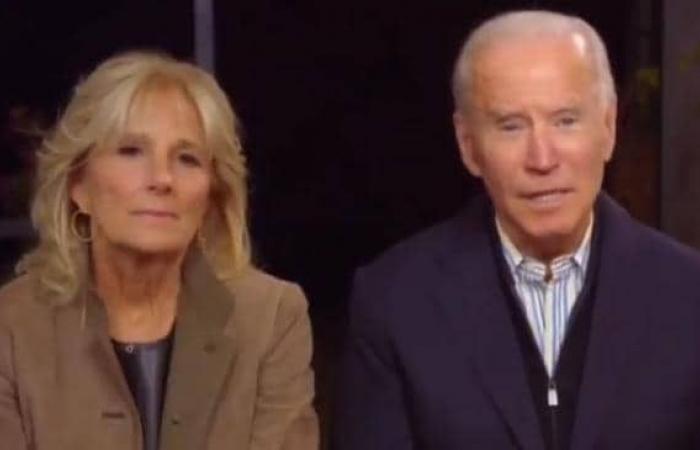 77-year-old Biden appeared with his wife Jill Biden on the live stream I Will Vote Concert, which featured artists such as Pink, Cher and John Legend as well as actresses Amy Schumer and Helen Mirren.

“And I think the character of the country is literally on the ballot. What kind of country will we be? Four more years of George, uh … George, uh … he, uh … will be in a position where if Trump is elected we will be in another world. ”

The clip was picked up by Republicans who pointed out that Mr Biden had mistaken Donald Trump for George W. Bush.

Others said the Democratic candidate, known for verbal gaffs and stuttering as a kid, simply misspelled it.

It comes after Mr Biden made another embarrassing slip up during his 60 minutes Interview that was also broadcast on Sunday.

Regarding his corporate tax plans, Mr. Biden suggested “sending each qualified individual to a four-year college in their state for $ 150 billion.”

60 minutes examined the claim, which was contested by the impartial Tax Policy Center.

“After our interview, Mr. Biden’s staff told us that he had misspelled the word and that the cost of a free public college could be double what it was said before,” host Norah O’Donnell told viewers.

Several commentators noted that there were times when the former Vice President seemed to lose focus during the debate.

“There were clearly times when Joe Biden faltered a little when he was making his point or finishing his sentence,” said the moderator and moderator of the first debate, Chris Wallace, afterwards.

Republicans have been ramping up attacks on Mr Biden’s mental fitness in recent weeks after pulling back on the subject, apparently fearing setback.

Mr Trump, 74, tweeted earlier this month that his rival had “dementia,” a word he had previously avoided, and later told a rally that he was mentally “shot”.

Following the rally, the President tweeted a photo titled “Biden for Resident” of Mr. Biden in a wheelchair in a nursing home.

The two candidates have significantly different schedules until the election on November 3rd.

Mr. Biden hadn’t planned any personal events for Sunday and his campaign was referred to as “lid” at noon before his evening appearance at the virtual concert.

The Republican has repeatedly ridiculed the Biden campaign for calling early “caps,” a term used by reporters when the candidate is effectively ready for the day.

“Today you know what happened, right? He put the lid on, ”he said at the rally in Manchester, New Hampshire on Sunday.

“Do you know what the lid is? He keeps opening the lid. The lid means I think it refers to a garbage can, right? You put the lid. I don’t know, something is going on. Someone said it was strategy, not because strategy would really come out. ”

Mr. Trump suggested that Mr. Biden was hiding because he was afraid to make a “stupid statement”.

These were the details of the news Joe Biden confuses Donald Trump with George W. Bush during the... for this day. We hope that we have succeeded by giving you the full details and information. To follow all our news, you can subscribe to the alerts system or to one of our different systems to provide you with all that is new.