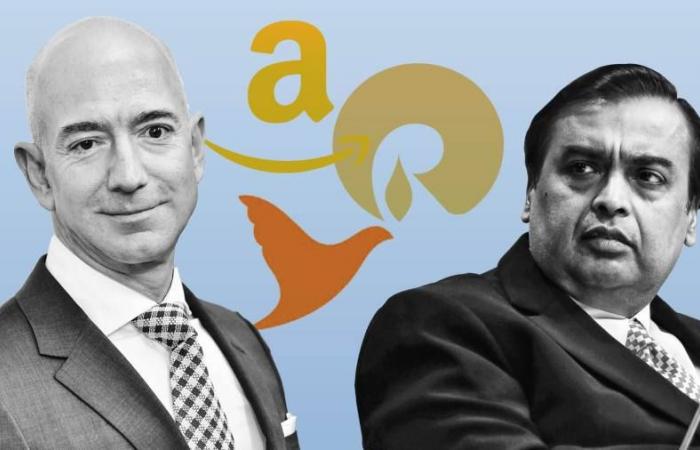 Jeff Bezos, CEO of Amazon, competes against Reliance Industries founder Mukesh Ambani over Indian retailer Future Group, drawing the line between two of the richest men in the world for the country’s lucrative e-commerce market.

On Sunday, the Singapore International Arbitration Center issued an injunction in favor of Amazon after the U.S. tech group filed a complaint related to a $ 3.4 billion deal Reliance struck with Future Group in August .

Amazon, which acquired an indirect minority stake in the retail and fashion conglomerate last year, alleged that the sale of Future’s retail, wholesale, logistics and warehousing businesses to Reliance violated its pre-existing contract, which included an initial offer right and a non-offer contained a competence clause. The deal is now on hold pending a final decision.

The litigation comes as Amazon and Reliance battle it out for supremacy in India’s booming e-commerce market, which Forrester says will be valued at $ 86 billion by 2024. The stakes are particularly high for Amazon, which considers India to be a large growth market after it closed its online shop in China last year.

Reliance, India’s largest offline retailer with more than 11,000 stores and $ 18.5 billion in sales last year, has little presence in e-commerce. However, a strategy is being pursued to oust Amazon and Walmart’s own Flipkart, which together control about 70 percent of the online market in India.

After raising $ 20 billion from global investors for Reliance Jio, its telecommunications and digital services business, Mr Ambani has since launched another fundraising flash for his retail business. His vision is to digitize Reliance Retail and its vast offline network by raising more than $ 5 billion from marquee supporters to date.

“With the kind of funding Reliance has received, it’s obvious that they’ll be playing in the same game [online] Markets like Amazon and Flipkart, ”said Bernstein’s Rahul Malhotra in Mumbai. “This is the beginning of a more competitive era.”

“Ambani is after what Bezos has”

The battle for future retail comes as Amazon and Flipkart seek partnerships with brick and mortar retailers in India to expand while complying with new regulations restricting overseas players in the e-commerce sector.

Amazon, Reliance, and Future Group declined to comment on this article.

The skirmish marks the latest setback for Mr Bezos in India after a high profile trip failed in January. The Commerce Secretary said the Amazon chief’s pledge to invest $ 1 billion in digitizing small and medium-sized businesses across the country was not “a great” favor for India “.

Mr Bezos, who has invested billions in India since it went live in 2013, was unable to secure a meeting with Mr Modi upon his arrival in New Delhi, a person near Amazon said. Mr. Bezos later had breakfast with Mr. Ambani and other industrialists in Mumbai.

“They are obviously big rivals. Ambani is after what Bezos has, ”said a banker from Mumbai. “A typical middle-class Indian kid wants to shop online and thinks of Amazon, not Reliance Retail or JioMart,” he said, referring to Reliance’s online grocery supplier.

Despite occasional talks over the possibility of Amazon’s stake in Reliance Retail earlier this year, analysts said Bezos is cautious about partnering with the powerful Indian tycoon. Mr Ambani was also reluctant to hand over majority stake or control to his rival, saying people close to Reliance said and hampering real efforts to get a deal.

Mr. Ambani was a magnet for investment when he wanted to turn his energy conglomerate into a local tech superpower. He made no secret of his plans to make Jio Platforms the next internet giant.

“Jio wants the maximum household spending to come to them,” said Satish Meena, a New Delhi-based analyst at Forrester. “They do the same thing that they do with telecommunications, and if they are able to control grocery purchases, they have captured most of the household expenses.”

Future operates some of India’s best-known retail brands such as the Big Bazaar supermarket chain and the premium grocery store Foodhall. If Reliance were to join the group, Mr. Ambani’s empire would control 40 percent of the country’s formal grocery market.

“Why should a foreign company dominate?”

According to analysts, Reliance has the advantage of being on the right-hand side of a growing flurry of protectionist policies in India, although Amazon and Flipkart are lagging behind in its online user experience.

“In Mumbai business circles, Amazon is seen as something of a new East Indian society,” said a person close to Reliance, referring to the private British company that ruled large parts of the Indian subcontinent in the 18th century. “Why should a foreign company dominate when we have local giants – from Ambani to Tata and Birla?”

The changing e-commerce regulations in the country have raised familiar questions about how to treat New Delhi’s largest overseas investors. For years, Vodafone has had a tax dispute over EUR 3 billion with the Indian authorities in connection with the takeover of a local operator.

After Walmart paid $ 16 billion in 2018 for Flipkart – the country’s largest single foreign investment – New Delhi changed its rules for the sector just months later by banning and allowing foreign companies to keep their own inventory to act only as online “marketplaces”. Connect sellers with buyers.

To get around these rules, Amazon and Flipkart have acquired stakes in Indian retailers to deepen their supply chains. Amazon has a stake in the Shoppers Stop department store and the More grocery chain, which is part of the Aditya Birla Group. Flipkart announced on Friday that it had paid $ 200 million for a 7.8 percent stake in Aditya Birla Fashion & Retail Limited, which has more than 3,000 stores in the country.

According to analysts, the outcome of Amazon’s litigation with Future has been difficult to predict. Reliance said in a statement that it intends to enforce its rights and complete the transaction. . . with Future Group without delay ”.

At the very least, however, the US group’s arbitration would take some time, said Neil Shah, an analyst at Counterpoint in Mumbai.

“Amazon could stick a wrench in the wheel to slow down the Reliance expansion,” said Shah. “But Reliance is making great strides and is a great threat. The ball is in Mr. Ambani’s yard. ”

These were the details of the news Jeff Bezos takes on Mukesh Ambani in the Indian e-commerce battle for this day. We hope that we have succeeded by giving you the full details and information. To follow all our news, you can subscribe to the alerts system or to one of our different systems to provide you with all that is new.